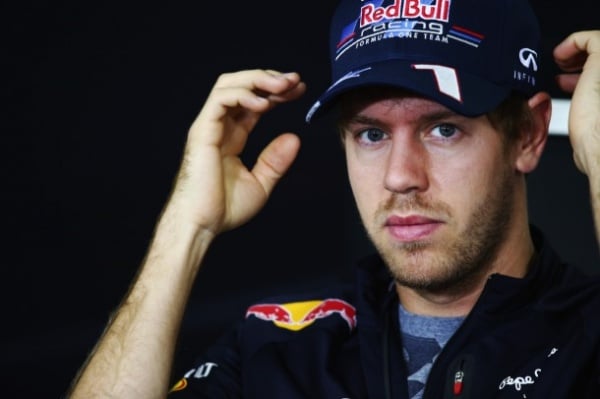 Sebastian Vettel wrote himself another page in the Formula One history books as sixth place in a dramatic Brazilian Grand was enough to hand him his third consecutive championship crown.

In claiming the title, Vettel joins the legendary Juan Manuel Fangio and Michael Schumacher as only the third driver in the sport’s history to win three or more championships in a row.

Seb’s third was hard-won, however. Starting from fourth on the grid, he suffered a first-corner collision with Williams’ Bruno Senna that left him with damage to his car’s sidepod. Remarkably, though, Vettel was able to carry on, though he was dropped to the back of the field.

Up ahead, arch-rival Fernando Alonso was taking the fight to the leading McLaren pair so if Vettel was to have any chance of taking the title he needed a swift response.

It wasn’t long in coming. The defending champion scythed his way through the pack and by lap eight he was up to sixth and pushing hard.

As the topsy-turvy race unfolded, Alonso climbed to second, passing team-mate Felipe Massa with 10 laps remaining. That meant that Sebastian needed seventh or better to take the title.

After a long battle with Sauber’s Kamui Kobayashi, Vettel eventually slotted into the required position and then, to secure the title, chased down and passed boyhood idol Michael Schumacher to seal his third championship victory.

“It’s difficult to imagine what goes through my head now, I am so full of adrenaline,” he said afterwards. “It was an incredible race, everything that could have happened to make it more difficult for us today, happened! I got turned around in Turn 4 for no reason and was heading the wrong way; so I had to get straight and was lucky no one hit me.’

Vettel confirmed that the incident with Senna had taken a toll on his pace for the rest of the race.

“The car was damaged and we lost speed in straights, even more as it dried up, but fortunately it started to rain again.” He said. “All weekend people tried to push us in a certain direction and said if it rained it would be harder for us, but we have proven today that we like rain conditions as much as the dry.”

Commenting on his season-long quest for a third title, Sebastian added: “The most important thing throughout the season is that we kept pushing and remained ourselves. We just try to do our thing and stick to the route that we know and that’s what made the difference. Some people try to play games, but we never get distracted, we keep going our way. Everyone at Milton Keynes and here at the circuit, they are always pushing so hard and we really stepped up our game in the second half of the season.

“I would like to thank everyone in the team and at Renault,” he continued. “There’s no one in this team that feels more important than any one else, we all push together, alongside each other, it’s one big force and I’m very proud of that. It’s unreal what has happened. To win a third title, especially here where one of my heroes Ayrton Senna was from, it’s difficult to put into words. I was crying in the car but my radio wasn’t working, so I’m maybe happy for that! Tomorrow I can probably say more, but now I just don’t have the right words.”

Mark Webber, who drove an excellent race to fourth after dropping down the order following a collision with Sauber’s Kamui Kobayashi paid tribute to his team-mate’s achievement saying it was “a great effort”.

“He has joined a pretty decent club now and set his own record in some ways, the youngest ever World Champion and now a triple World Champion – you’ve got to take your hat off to him.

“The season has gone fast, there have been a lot of different winners, some ups and downs, a lot of crashes and a couple of nice wins for myself,” he added. “I’m now looking forward to having a break, to recharge and then it’s on to 2013.”

Team principal Christian Horner hailed Vettel’s achievement as “phenomenal” and said the newly-crowned champion had been “better than ever” this season.

“An unbelievable end to what has been a really incredible season,” he said. “We always knew this Championship was going to go right down to the wire and I don’t think anybody could have expected the kind of race we got today. But, to have achieved a triple double World Championship is quite phenomenal.

“Sebastian has driven better than ever this season and has fought his way back into this Championship; he’s never given up and you saw that in today’s race,” he added. “After being knocked out of position and going to the back of the field with a load of damage, he fought his way back into the race, he never gave up and it was a race of maximum stress today with rain and no rain, then incidents, spins, you name it, it happened – safety cars, radios that didn’t work…

“But you have to reflect on the season as a whole,” he continued. “Over 20 races the team has done an unbelievable job and Sebastian truly deserves this World Championship. Having gone up against an incredible opponent in Fernando Alonso, and we have to pay tribute to him and the way he’s driven this year, it has made this Championship even more appreciated because of the level of competition we’ve had to compete against. So, all I can do is thank every single member of the team for everything that they’ve put in. It’s going to take a little while for the success to sink in.”

Finally, Chief Technical Officer Adrian Newey said that Sebastian’s win was tribute to the tenacity of the whole team in often difficult circumstances.

“The whole season has been an amazing ride, but today, to finish it like that down to the wire with so many obstacles was just great,” he said. “We had so many things thrown against us. I think to come through all that and still get enough points to win the Championship was a real testament to team and driver.

“For Seb to get three championships, I don’t know how you’d be able to describe that, but I think the hallmark of the year really has been the tenacity shown by the team. We struggled with the car at the start of the year, trying to understand how it worked with the loss of the side exhaust, and to turn around a slightly difficult sub car at the start of the year, to get it to the point where we were able to seal the Constructors’ a week ago and then again here with the Drivers’ – it’s just been a great tribute to everybody.”

Sebastian Vettel and Lance Stroll crash on cool down lap