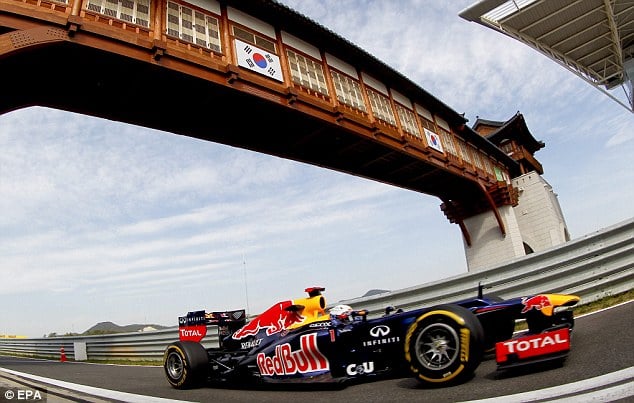 Vettel’s third victory in a row was secured in the first three turns of the race. When the lights went out pole position winner Webber made a marginally slower getaway and Sebastian was able to pull alongside his team-mate into turn one. It was a close battle but by the end of the circuit’s long back straight the champion was ahead and had the better inside line. He held his nerve on the exit and emerged in front of his team-mate.

On lap 14 Mark headed for the pits to discard his supersoft tyres for a set of the prime soft tyres. Vettel stayed out for another tour and after his stop for the prime tyre managed to stay ahead of his team-mate and with a marginally healthier gap.

From there it was simply a case of both drivers managing tyre wear in order to maintain their one-two status ahead of Alonso and his fourth-placed team-mate Felipe Massa.

For Webber the process seemed relatively straightforward but ahead of him the race leader was being told to tread carefully, as the condition of his front right tyre was causing a few frayed nerves on pitwall.

Sebastian sensibly eased back until the final lap, when he set his by now traditional best time, and then comfortably took the chequered flag ahead of Mark to score a 25th career win that leaves him six points ahead of Alonso in the Drivers’ Championship, on 215 points. It’s the first time Seb has led the championship since the Spanish Grand Prix, where he ended up tied with Alonso on 61 points but in first place by dint of marginally better results overall.

Kimi Raikkonen, who finished fifth in Korea, remains third in the standings with 169 points, while Lewis Hamilton, tenth today, is fourth on 153 points – just one ahead of Mark.

“I think it was a perfect day for me and the team,” said Sebastian afterwards. “It was important to get a good start. I was able to out-accelerate Mark and get side by side; I had the inside for Turn 3 and a good exit, which meant I could stay ahead for Turn 4. I was in the lead, but we have seen before that it doesn’t always stick.

“My one mistake today was a lock-up going in to Turn 3, but with the tyres it was marginal for everyone,” he added. “You couldn’t push so much and my front right didn’t look too happy from the inside many times. We were able to pull away in the first and second stint and hold it for the third. We will have to do our best to remain where we are now. We have to just keep it simple and do our job.”

Webber, meanwhile, admitted that his less than perfect getaway had compromised his race. “I had a bit too much clutch off the line, which was disappointing,” he said. “I put up a fight on the back straight with Sebastian, as it wasn’t all over. I tried to make a move, but once I pulled out of his slipstream, both of us were on the same speed. After that I was going quite well in the first part of the race. I couldn’t use DRS, due to the yellow flags and after that it became a tyre battle.
“The second stint wasn’t so good, as I went a bit slower to conserve the tyres, but that made the degradation a bit worse,” he added. “The last stint was the strongest, but it was too late by then. Congratulations to Sebastian on the win and it’s great for the team that we got a one two, especially for the Constructors’, but I have mixed emotions. It was a good result, but of course, I wanted to get the top result today.”

Team Principal Christian later hailed the team’s performance as “a phenomenal result”. “Our first one two of the season and a great performance,” he said. “Both drivers executed excellent races. It’s been a very positive ten days and it’s important we continue to build on the momentum going into the final four races.”

With the first four places occupied by Red Bull Racing and Ferrari machines, Kimi Raikkonen had to settle to for fifth place, ahead of Nico Hulkenberg and Romain Grosjean. The remaining points positions were taken by the twin Toro Rossos of Jean-Eric Vergne and Danel Ricciardo and Hamilton.

Our first one-two finish of the season means the team has extended its Constructors’ Championship lead over its closest rival by 36 points. Prior to the Korean GP the team was 41 points clear of McLaren but after today’s result we now have 367 points, 77 clear of Ferrari who have moved into second place in the standings. Hamilton’s tenth-place finish earned McLaren a solitary point, as Jenson Button’s race was over just after the start, the Briton being sidelined following a collision with Sauber’s Kamui Kobayashi.