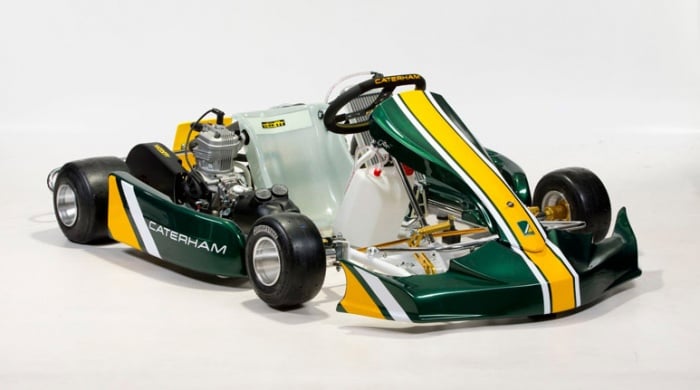 PLANS for a new one-make Caterham Karting Series starting in 2014 have been announced by sports car maker Caterham.

It will showcase its intention to revive karting as an accessible sport in its own right at the Autosport International Show in the UK this weekend. Drawing on its decades of experience operating one-make racing series, the move to host Caterham Karting comes as part of Caterham’s desire to create a continuous ladder of racing series from grass roots to Formula One.

Similar rules and regulations to existing Caterham championships will mean that all karts will be supplied and maintained by Caterham Karting itself, to ensure parity and fair play. The new challenge will be aimed at 13-16 year olds who may not have previously considered karting as an option. A maximum of 120 participants can get involved in the season of six one-day events.

All drivers will use the newly unveiled Caterham Karting CK-01 kart. The package price, covering the kart, entry to the six events, a paddock trolley and guidance through the attainment of the driver’s ARKS racing licence, will be £4,995 plus VAT.

The company aims to reduce costs even further by completing all race activities in single days, so hotels and additional food will not be needed. They will be structured in a familiar way, with practice sessions, qualifying and then points-scoring races. Caterham Karting says all competitors will be ensured equal track time at each event.

Caterham Group CEO, Tony Fernandes, said, “Caterham Karting will once again make this fantastic sport accessible to everyone, without losing any element of the competition and experience. In fact, with tight regulations and totally transparent, controlled costs, Caterham Karting will simply be the best value, most competitive and most fun karting in the world.

Echoing the tagline for his budget airline, Air Asia, he added, “This is not just another new karting championship; this is a revolution in motor racing. Motorsport for all is finally here.”

Caterham Karting also benefits from the vast karting experience of Laura Tillett, who was the first British female to compete in the CIK FIA World Karting Championship and who will be part of the organisational team.