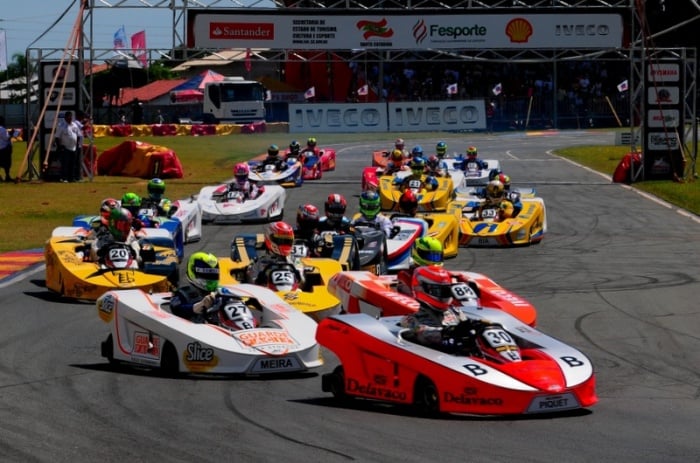 Seven weeks after the 2012 Formula One season ended in Brazil, a host of drivers were back in the country over the weekend for the ‘Challenge of the Stars’ kart race, an event organised each year by Ferrari’s Felipe Massa.

It was a particularly sweet victory for the Frenchman as he lost on winning last year because of a technical infringement.

“I am very happy with this victory,” said Bianchi, who is also a member of the Ferrari Driver Academy. “I had already won last year, but that time there was a slight mistake with the weight of the kart, but this time everything went well. It’s nice to race against some of the best drivers and in front of such a big and enthusiastic crowd. I want to thank the Massa family for everything and I hope I can come back next year to take part again.”

Another man keen to return next year was Alonso, even though accelerator problems meant he finished a lowly 24th overall.

“It was a very enjoyable weekend and I hope the spectators had has much fun as I did,” he said. “Will I be back next year? If Felipe asks me, definitely!”

Massa himself had to be content with eighth place overall in what he described as the hardest Challenge of the Stars event yet.

“If everything is not perfect, then even a tenth can make a big difference,” he said. “My engine was not at its best yesterday and I paid for that today. The most important thing is that the event is getting bigger year after year. I was very pleased that Fernando was here with us and I’m sure he had fun!”

From Brazil, Massa and Alonso will travel to the ski resort of Madonna di Campiglio in Italy for Ferrari’s pre-season get together, ‘Wrooom’. The Scuderia plan to unveil their new car at their Maranello base in early February. For details of other launches, click here