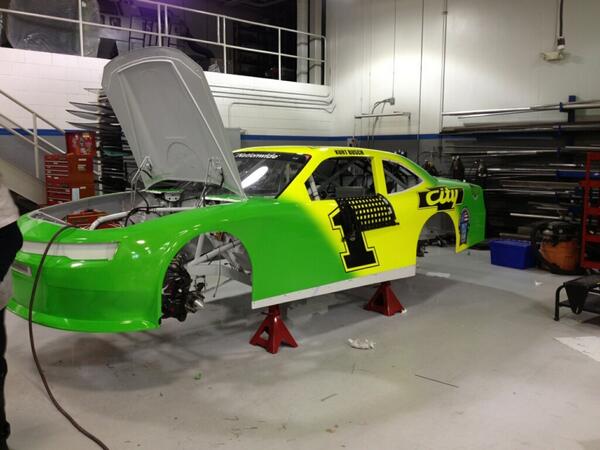 Kurt Busch will pay homage to the classic NASCAR movie Days of Thunder by using the paint scheme made famous in the flick.

Busch will race in the “City Chevrolet” that Tom Cruise’s character, “Cole Trickle,” drove in the 1990 movie.

To promote the car that Busch will race in Friday’s Nationwide Series race at Daytona, he, crew chief Nick Harrison and legendary owner Rick Hendrick acted out a scene from the movie.

The owner of Cruise’s car in the movie is actually a character based on Rick Hendrick.

If you’ve never seen the Days Of Thunder movie, it’s the story of a young driver who must overcome a head injury to beat his rival and take his place at the top of the circuit. Or, more simply, it’s nearly two hours of Cruise doing reckless things on and off the track.

ABOUT DAYS OF THUNDER

Days Of Thunder was the first of three films to star both Cruise and Kidman (the other two being Far and Away and Eyes Wide Shut).

While the movie was neither based on a true story, nor a biographical film, the main character Cole Trickle was very loosely based on the career of Tim Richmond, and several scenes reenacted or referenced real-life stories and personalities from NASCAR history.

The Days Of Thunder scene where Big John tells Cole and Rowdy they will drive to dinner together is based on an actual meeting Bill France, Sr. had in the 1980s between Dale Earnhardt and Geoff Bodine.

In another scene, Trickle is told he can not pit because the crew is too busy eating ice cream. This incident took place with crew chief Harry Hyde and driver Benny Parsons at the 1987 Southern 500.

The scene where Cole and Rowdy destroy a pair of rental cars by racing them through the city streets loosely referenced a real-life account. Joe Weatherly and Curtis Turner were known to rent cars, race, and crash them with abandon.