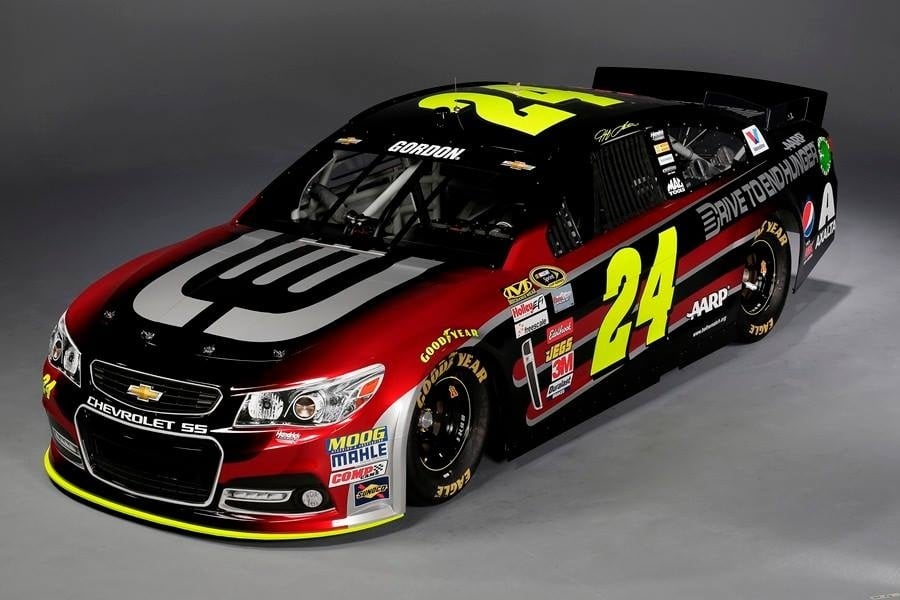 The No. 24 Drive to End Hunger Chevrolet SS, driven by four-time NASCAR Cup Series champion Jeff Gordon for Hendrick Motorsports, will feature a new primary paint scheme for the 2014 NASCAR Sprint Cup Series season. The new design still uses candy apple red as the base color, with a black background and silver accents, all boasting a sleek metallic finish. The biggest changes are to the hood and sides of the car, where the Drive to End Hunger “Forked D” has an even bigger presence as a central design element.

“The committed and generous involvement of NASCAR fans has been a core component of Drive to End Hunger over the years, so it makes sense that they should get the first peeks at next year’s ride,” said AARP Foundation President Lisa Marsh Ryerson.

“Drive to End Hunger’s signature fork logo is a clarion call that not only raises awareness of the plight faced by nearly nine million older adults who struggle to put food on the table, but also lets people know how they can get involved in helping feed the hungry today and end the threat of hunger in the long term,” concluded Ryerson.

“For other Sprint Car Cup Series drivers,” said Jim Lutzweiler, AARP Foundation Vice President, Hunger Impact, “seeing that fork either means that Jeff is coming up fast behind you or, more likely, is already out in front.”

Since AARP and AARP Foundation launched Drive to End Hunger, the initiative has donated more than 27.4 million meals and driven corporate and individual donor commitments with an expected value of approximately $ 21 million to help fund AARP Foundation’s hunger solutions.

To learn more or to get involved, please visit www.DriveToEndHunger.org.

AARP Foundation is working to win back opportunity for struggling Americans 50+ by being a force for change on the most serious issues they face today: housing, hunger, income and isolation. By coordinating responses to these issues on all four fronts at once, and supporting them with vigorous legal advocacy, the Foundation serves the unique needs of those 50+ while working with local organizations nationwide to reach more people, work more efficiently and make resources go further. AARP Foundation is the charitable affiliate of AARP. Learn more at www.aarpfoundation.org.