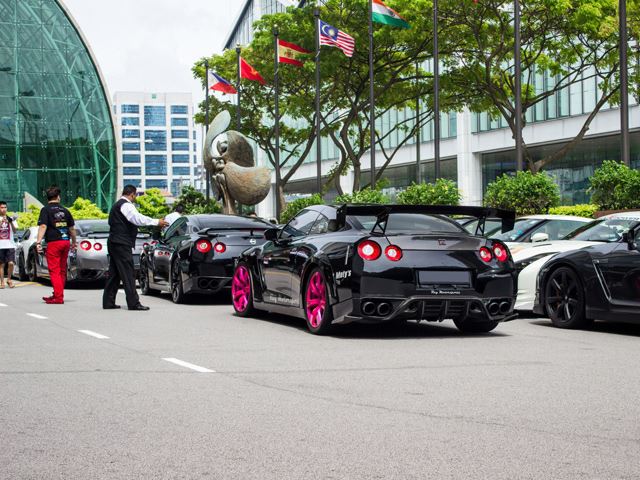 These awesome Singapore Nissan GT-R Photos were all collected in Singapore. The most popular supercar by far in the tiny location.

Nissan introduced the GT-R SpecV on January 7, 2009 at the 2009 Tokyo Auto Salon. Exterior changes from the base GT-R consist of a carbon fiber rear spoiler, grille, and brake ducts, along with an exclusive Ultimate Black Opal paint job. Interior changes include a set of carbon fiber Recaro front seats with the rear seats being completely removed. Carbon fiber covers the center storage box, instrument panel, and replaces the majority of the interior trim.

The GT-R SpecV is powered by the standard twin-turbo 3,799 cc (3.8 L; 231.8 cu in) V6 with no increase in horsepower. A new high gear boost controller that allows a temporary increase in boost pressure to the IHI twin turbochargers, now larger than those on the standard GT-R, should deliver more torque in mid to high-range revs. Other mechanical changes include a titanium exhaust, reworked suspension, carbon ceramic brakes, and 20-inch (510 mm) Nismo wheels. Overall weight is decreased by 132 lb (60 kg) over the standard GT-R.

Japan sales began on February 2, 2009 at seven preselected dealers who are staffed by mechanics with special GT-R SpecV training and are knowledgeable of racing circuit driving. Pricing is set at ¥15,750,000 (over US$160,000). Nissan has yet to announce any plans to sell the Spec V in the USA.

Ricky Weiss Racing has a stunning new trailer on the way