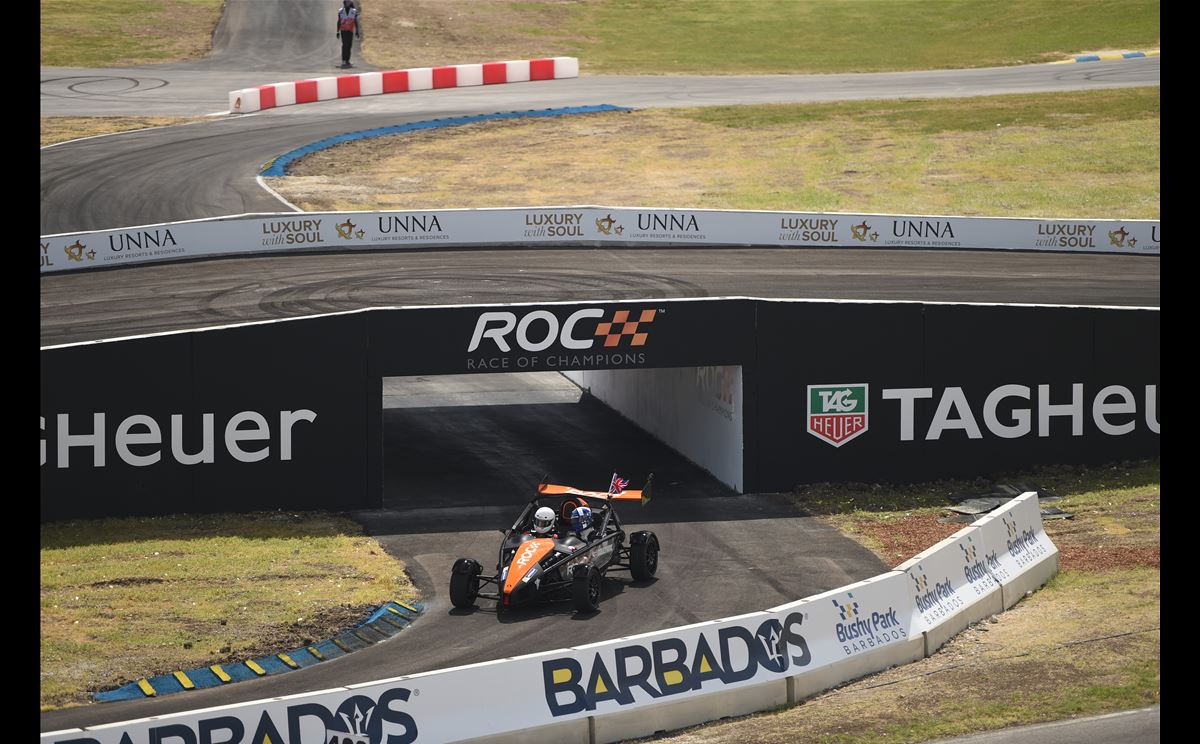 David Coulthard tops the Race of Champions 2014 results sheet. Multiple Formula 1 grand prix winner David Coulthard put in a stunning performance to eclipse 15 fellow stars of motor sport and win the Race Of Champions on a thrilling afternoon of action and entertainment at Bushy Park Barbados.

Following Team Nordic’s triumph in Saturday’s ROC Nations Cup, today’s Race Of Champions pitted many of motor sport’s biggest names against each other in identical cars on a purpose-built parallel track.

On another hot afternoon in Barbados, the best-of-three Grand Final boiled down to a battle of Formula 1 drivers young and old. But in the end Coulthard saw off Mercedes F1 official reserve driver Pascal Wehrlein to become Champion of Champions for the very first time.

Coulthard had been in the Race Of Champions Grand Final once before, when he lost out by the narrowest margin to rally legend Sébastien Loeb at Wembley in 2008. This time he prevailed over his young German challenger, who can nonetheless be proud of his run to the Grand Final at the first attempt.

Coulthard said: “We’ve had a fantastic week, never mind a fantastic race weekend. So huge thanks to all the wonderful people of Barbados for coming out – and of course to Fredrik Johnsson and his team at ROC. I’m retired so it’s lovely to get another trophy. But I think everyone can see that in Pascal we have a star for the future. He’s already signed up with Mercedes in Formula 1 as a reserve driver and winning races in the DTM so motor sport’s in good health with great young drivers like this.

“But yes, I’m pleasantly very surprised and I’m slightly embarrassed because there’s such great talent out there. Maybe not racing for two years is the secret! Of course I don’t race any more – but at this event I had the advantage because being 23 years older than Pascal I’m used to changing gear whereas he was looking for the semi-automatic shift! It’s been a good weekend so thank you to the Race Of Champions, thank you to Barbados and I think a small rum punch is in order…”

Wehrlein added: “It was a pleasure for me to be here and to drive in the Race Of Champions. It was so much fun, but in the end David did really well. I couldn’t beat him – maybe because for me it’s a bit tough to drive a manual shift car with a clutch and everything. I’m used to driving with shift pedals and braking with my left foot so I was struggling a bit with that. But today David was unbeatable so congratulations to him. To reach the Grand Final and lose against him is not bad for my first year. During the weekend I’ve improved so maybe I’ll come back next year and see what happens…”

At the semi-final stage, Coulthard pipped six-time V8 Supercar Champion Jamie Whincup by just two tenths of a second. The other race was a battle of the young guns as Wehrlein eliminated the 2014 FIA European F3 Champion Esteban Ocon.

Coulthard had a spectacular quarter-final win over FIA World Rallycross Champion Petter Solberg in the Volkswagen Polo RX, meaning there was to be no repeat of the ROC Nations Cup glory the Norwegian enjoyed yesterday.

The quarter-finals were a bad round for the American drivers as no less than three of them went out in quick succession. Ocon defeated the 2014 Indianapolis 500 winner Ryan Hunter-Reay, Whincup beat NASCAR Champion Kurt Busch and Wehrlein saw off the challenge of seven-time off-road champion Robby Gordon.

To start the afternoon’s action the drivers were earlier split into four groups of four, battling for the right to line up in the knockout stages.

Coulthard began in dominant fashion, taking three wins out of three in Group A. But there was a surprise in store for the reigning ROC Champion of Champions Romain Grosjean, who was beaten into third place and eliminated by Whincup after a duel in the Stadium Super Trucks. Five-time 500cc MotoGP World Champion Mick Doohan also failed to progress.

Busch was the dominant driver in Group B, also picking up a perfect three wins. On the way he defeated Solberg, who took second place. Home star Rhett Watson could not repeat his heroics of yesterday’s ROC Caribbean triumph but he gave the crowd something to cheer with a win against Susie Wolff, the ROC Nations Cup runner-up, who also went out.

Gordon stormed through Group C with all three wins, while Ocon joined him in the quarter-finals with two. Out went World Touring Car Champion José-Maria ‘Pechito’ López despite his victory over Jamaica’s Doug Gore, who qualified as the fastest non-Barbados driver from yesterday’s ROC Caribbean.

Hunter-Reay came away from Group D with a perfect record, but there was a shock as Wehrlein also progressed at the expense of Le Mans legend Tom Kristensen. After yesterday’s ROC Nations Cup triumph alongside Solberg for Team Nordic, the Dane came back down to earth with a bump after a spectacular off in the Stadium Super Truck. GP2 Champion Jolyon Palmer also went out – becoming yet another victim of the Truck as he spun it into the wall.

Young charger Ocon earlier sealed the first triumph of the day in the inaugural ROC Skills Challenge presented by TAG Heuer #DontCrackUnderPressure. The course is designed to put the drivers through their paces over a range of tests such as slaloms, 180 and 360 degree turns and parallel parking. Ocon showed his stuntman potential as he set the fastest time ahead of Kristensen and Solberg.

The other man to make history at Bushy Park Barbados was stunt driver Terry Grant, who set a new world record for the most people in a car on two wheels. He packed a scarcely imaginable 15 people into his Nissan Juke as he toured round the circuit.