Colombia’s 2015 Indianapolis 500 winner Juan Pablo Montoya put in a stunning performance to eclipse 16 fellow stars of motor sport and earn the title ‘Champion of Champions’ for the first time on a thrilling afternoon of action at Miami’s Marlins Park.

Today’s individual Race Of Champions pitted many of motor sport’s biggest names in identical cars on a brand new figure-of-eight track. On a hot and sunny day in Miami, the best-of-three Grand Final boiled down to a battle between two of the biggest stars of world motor sport. But in the end ROC debutant Montoya saw off ‘Mr Le Mans’ Tom Kristensen in two straight heats to become Champion of Champions in front of 15,000 race fans in Miami.

Kristensen was making a record-equalling 15th consecutive Race Of Champions appearance, matching the mark set by rally legend Stig Blomqvist. The Dane, a nine-time winner of the Le Mans 24 hours, has now reached the Grand Final no less than five times but he has never won the big prize. By contrast Montoya was making his ROC debut here in his home town Miami. 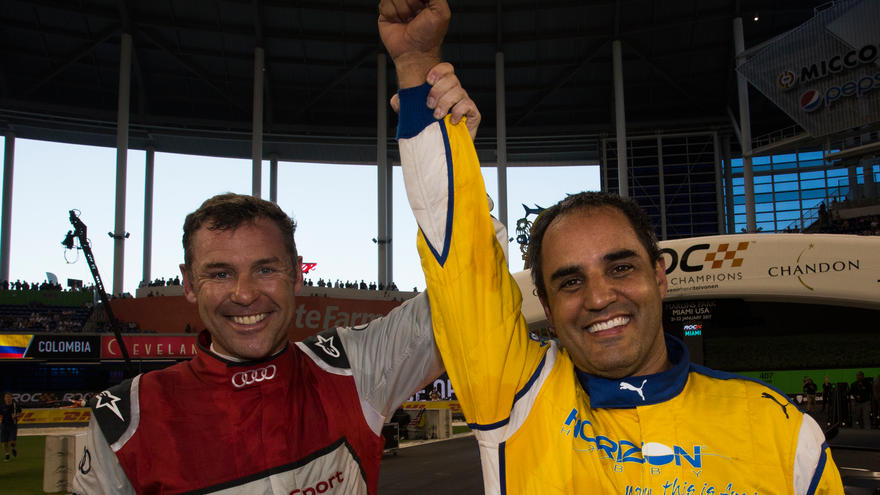 Montoya said: “First I want to thank all the fans who came out today. Fredrik Johnsson and everyone at the Race Of Champions have put together an amazing event, it’s unbelievable. Today I’m regretting not having done this before. It has been an amazing experience.

“It’s not our job, it’s a fun event. But when you go to the grid you want to warm the tyres and the brakes. You think about how to drop the clutch, what to do in the first corner. It’s unbelievable how focused you are. It’s like qualifying. I don’t know what gave me the edge. I don’t have pride, I just kept asking people what they were doing. That way I kept adding things to the database of what I needed to do. I spoke to David Coulthard just before the final to ask whether I had to change gears in the cars because I had no idea. It went well… must be beginner’s luck!”

Kristensen added: “I’m proud to have made it to the final and I enjoy it immensely to be here. I’ve been retired for two years but coming here of course you don’t forget what you live for. We are racing drivers and to be invited to the Race Of Champions brings the best out of us. If you’re too cautious you don’t win but if you are too brave you can get it wrong so easily. But the camaraderie is special. You try to do your best and in the end all the races are extremely close so you never know beforehand who will win. So well done to Juan Pablo. I’ve known him for many years and I always knew he would have an exceptional career.”

In the semi-finals, Montoya beat 11-time Formula 1 grand prix winner Felipe Massa 2-0 after the Brazilian earned a time penalty for contact with the wall in one of the heats. Kristensen won through over 2014 Champion of Champions and Formula 1 star David Coulthard by the same margin.

In the pick of the quarter-finals there was almost nothing to split Kristensen and 2009 Formula 1 world champion Jenson Button. But the Dane won the third and deciding heat by just 0.06 seconds to progress. Coulthard knocked out NASCAR champion Kyle Busch, putting paid to the hopes of an American winner for the Miami crowd. 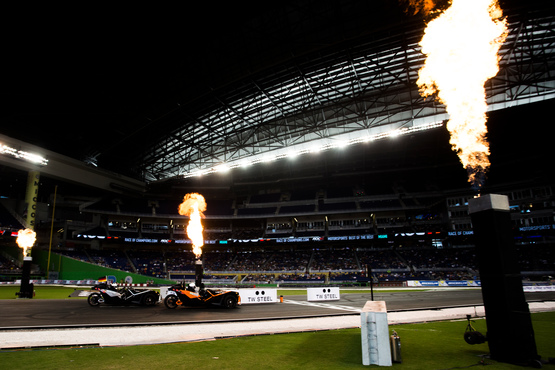 To start the afternoon’s action the drivers were earlier split into four groups of four, battling for the right to line up in the knockout stages.

Pastrana dominated Group A with three wins out of three, while Castroneves made it through with two wins. But in an early shock, reigning ROC Champion of Champions and four-time Formula 1 world champion Sebastian Vettel failed to get past the group stages. 2016 Indy 500 winner Alexander Rossi was also knocked out, shortly after prevailing in a qualifying race against Global Rallycross Champion Scott Speed.

Group B was a tighter affair but Montoya and Massa took two wins each. They went through at the expense of double World Rallycross Champion Petter Solberg despite the Norwegian’s victory over Massa. Formula 1 driver Pascal Wehrlein also won one of his heats but he failed to progress after dramatically crashing out of his last heat.

Button stormed through Group C with three wins, while Kyle Busch joined him in the semi-finals with two. It was a bad group for IndyCar stars as 2013 Indy 500 winner Tony Kanaan and last year’s Indy 500 pole-sitter James Hinchcliffe both went out.

Coulthard came away from Group D with a perfect record and he was joined in the final stages by Kristensen, who took two wins. NASCAR champion Kurt Busch was unable to join his brother in the quarter-finals despite a win over 2014 Indianapolis 500 winner Ryan Hunter-Reay, who also missed out on the latter stages. 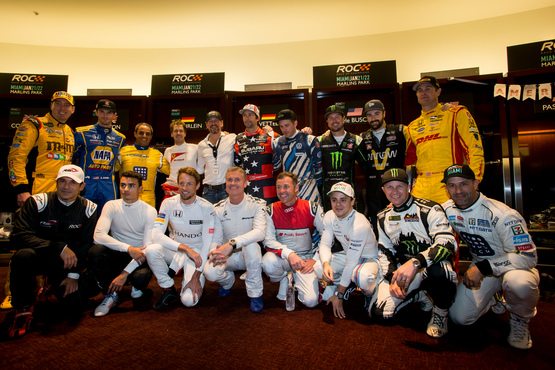 Before today’s action the drivers took part in the ROC Skills Challenge, a special course set up near Marlins Park featuring chicanes, slaloms, 360° turns and parallel parking. There was an early triumph for IndyCar star James Hinchcliffe who came out on top, beating Sebastian Vettel into second place.

Together with the ROC drivers and Racing For Cancer, the Race Of Champions is also running a charity auction. Unique items include the ROC Art Car painted by Miami artist Alex Mijares and raced by drivers including Juan Pablo Montoya and Tony Kanaan. There is also a limited edition ROC Watch by Louis Moinet plus racing gear including overalls, gloves and shoes – all worn and autographed by the Race Of Champions drivers.

Click here to visit the auction site and make a bid!

The Race Of Champions has joined forces with AutoNation and Racing For Cancer to help drive out cancer. To make a $10 donation please text ‘RFC’ to 20222. This is on behalf of all participating race drivers. All proceeds will go to the new Pediatric Cancer Care Unit at Nicklaus Children’s Hospital in Miami.

There is plenty more action to come in Miami on Sunday as the drivers join forces in pairs in the ROC Nations Cup. Tomorrow’s events will culminate with the first ever Ryder Cup-style America vs The World – as the home drivers aim to prevail over the visitors in a head-to-head finale. The action starts at 12pm Eastern Time (5pm GMT) and tickets will be available on the door.