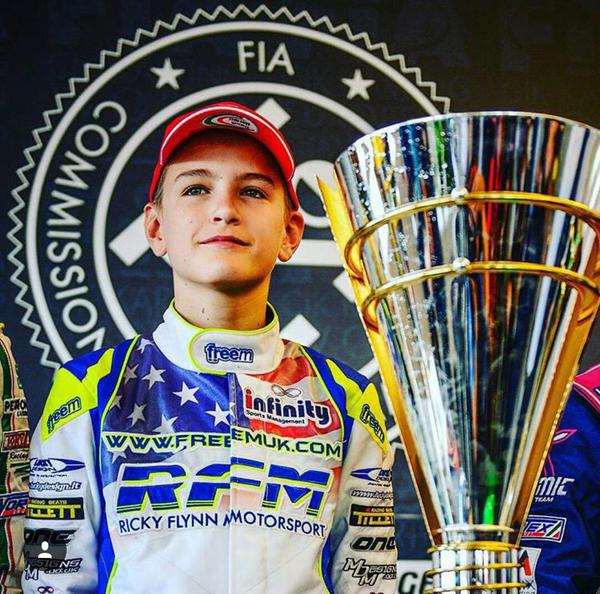 Logan Sargeant is an American karting driver who recently claimed the 2015 KFJ World Championship. He was born in the United States and currently goes to school in Switzerland.

American-born Logan Sargeant marked his name in history as he was crowned the first American 2015 KFJ World Champion since 1978 at La Conca on Sunday.

The young American who races for the reigning KFJ World Champions Ricky Flynn Motorsport started the weekend well on Friday Afternoon where he took the fastest time in his Qualifying group to leave him 2nd overall and in Group B for the remaining heats.

Logan Sargeant left no hope for his rivals after winning all-but-one of his four Qualifying Heat’s in dominating form and thus securing pole position for Prefinal 1.

Needing no invitation, Logan took to the head of the field in a similar fashion to previous heats, building a continuous lead throughout Prefinal 1 to finish the 13-lap race over a second ahead of his nearest competitor, Clément Novalak.

With Logan’s Venezuelan teammate, Sebastian Fernandez Wahbeh taking the Prefinal 2 victory, Sebastian joined Logan on the front row for the Grand Final, proving that again, Ricky Flynn Motorsport were a force to be reckoned with in KFJ.

Looking to continue his previous successes, Logan headed into the first corner in Italy with determination and held the lead after lap 1 with Prefinal competitor Clément Novalak following at a whiskers width behind in second. Holding his nerve, Logan managed to pull a 0.5s lead after the second lap with Caio Collet passing Novalak to head the chasing, and yet still determined pack behind.

This proved to be no competition for Logan, who pulled an almost consecutive lap-after-lap lead throughout the race to cross the line on lap 21 with a lights to flag victory and the 2015 KFJ World Champion Crown firmly under his belt.

Logan Sargeant: “It hasn’t even sunk in yet, it’s the best every feeling I’ve ever felt in my life. I couldn’t thank the team enough, they helped me so much. My mechanic Scott and driver coach Gary, they just brought me so far from the beginning of the year and I can’t wait for next year.”

Logan has confirmed his intentions to continue karting next season so this is sure to only be the start of things to come for the 15 year old American.