Target Chip Ganassi Racing with Felix Sabates (TCGRFS) announced today that Chad Johnston has been named the new crew chief for Kyle Larson and the No. 42 Target team.

Johnston joins TCGRFS from Stewart-Haas Racing, where he has been the crew chief for Tony Stewart and the No. 14 Chevrolet since the 2014 season. Johnston also served as crew chief for Martin Truex, Jr. and the No. 56 at Michael Waltrip Racing from 2011 – 2013.

Chad Johnston has one career NSCS race win as a crew chief (2013 Sonoma) and helped guide Truex Jr. into The Chase for the NASCAR Sprint Cup during the 2012 season.

Johnston has also worked in NASCAR as a race engineer at Morgan-Dollar Motorsports, Evernham Motorsports, and JTG Daugherty Racing before serving as a crew chief. 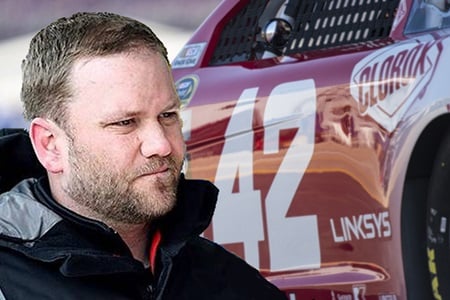 The Cayuga, Ind. native graduated from Indiana State University with a major in mechanical engineering, and briefly worked in the aerospace industry before his passion for motorsports brought him to NASCAR and the Camping World Truck Series in 2004.

Larson will begin his third full-time season in the NSCS in 2016. The 2014 NSCS Rookie of the Year is coming off of a season that featured two top-five and 10 top-10 finishes.

In 75 career NSCS starts he has accumulated one pole award, 10 top-five and 27 top-10 finishes.

Chip Ganassi, Owner, TCGRFS: “We are very much looking forward to having Chad join the No. 42 team, and excited for the fresh perspective that he brings. We fully expect the combination of Chad and Kyle to be the foundation of the No. 42 team for years to come. Chad is a race-winning crew chief and has helped steer a team into The Chase, two goals we have each season for our teams. I think his background and experience with veteran drivers will help as we look to continue to build on Kyle and the team’s success in the Sprint Cup Series.”

Chad Johnston, Crew Chief, No. 42 Target Team: “I am very excited for the opportunity to be joining Chip Ganassi Racing with Felix Sabates, and the opportunity to work with Kyle Larson. The organization has a great reputation in numerous forms of racing, and I’m looking forward to adding to that reputation in NASCAR. Kyle is certainly a unique talent, and I’m eager to get to work with him and the team as we look to build a foundation of success.”

Kyle Larson, No. 42 Target Chevrolet: “I’m excited to get to work with Chad and to start doing what needs to be done to get the team to victory lane next year. As a team, I think we are very close and the addition of Chad should help move our program forward for many years to come. Lastly, I would also like to thank Chris for all he did to help me grow in my first two seasons in the Cup series.”

Chad Knaus will crew chief for William Byron in 2019