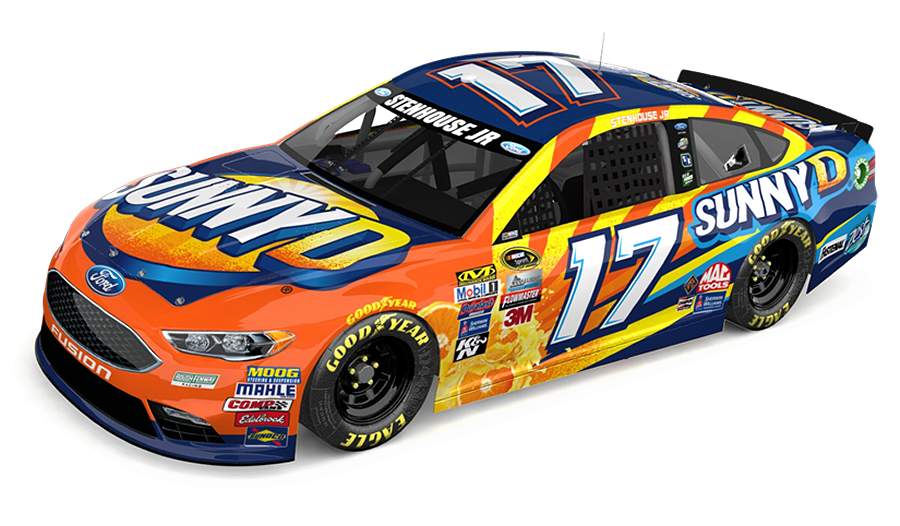 Ricky Stenhouse Jr SunnyD NASCAR Racecar photos have been released. The car is scheduled for 4 races in the 2016 season.

CONCORD, N.C. (March 1, 2016) – Two-time NASCAR Champion Ricky Stenhouse Jr. and the No. 17 Roush Fenway Racing Sprint Cup team will not be reaching in the drink cooler for any of that ‘purple stuff’, OJ or soda when they feel the need to quench their thirst at the race track, instead they will go for theREFRESHING bold and tangy taste of a true classic – SunnyD.

Roush Fenway Racing has announced that the iconic 50-year-old Sunny Delight brand will serve as a primary partner for five races with Stenhouse during the 2016 season; four on his No. 17 Sprint Cup FORD FUSION and once as the two-time NASCAR XFINITY Series (NXS) champion makes his return to the NXS.

“This is really awesome,” said Stenhouse. “Who didn’t grow up loving the bold taste of SunnyD?  It’s truly one of the most recognizable brands in the world and it’s great to both have them on board as a partner and ofCOURSE to have a big supply of SunnyD on hand at the track as the season moves into the hot, thirsty months of summer.”

“We are extremely excited to bring the SunnyD brand and its loyal customer following to our Roush Fenway Racing NASCAR partnership,” said Henk Hartong III, chairman & CEO of Brynwood Partners.  “This is a platform that DIRECTLY connects with the most brand-loyal fans in all of sports and we know it will connect on a high level with the NASCAR fans.”

SunnyD will make its debut as the primary partner on Stenhouse’s No. 17 Ford at the Monster Mile of Dover onSunD, May 15. It will also serve as the primary on the No. 17 at NSCS races at Pocono, Indianapolis and Charlotte. In addition, the two-time champion will make his return to the XFINITY Series at Phoenix, where he will carry SunnyD on the historic No. 60 Roush Fenway Mustang on SatD, Nov. 12.

This will not ‘mark’ the first time SunnyD has appeared on a Roush Fenway Ford. Mark Martin carried the Sunny Delight logo on the deck lid of his Ford Thunderbird during his heated championship battle with Dale Earnhardt in 1990.

Sunny Delight Beverages Co. (SDBC), based in Cincinnati, OH, was acquired by Brynwood Partners VII L.P, based in Greenwich, CT, in February 2016.  SDBC is a leading producer, distributor and marketer ofJUICES, juice drinks and flavored waters in North America.  Its brands include the iconic SunnyD juice drink, Veryfine juices and drinks, and Fruit2O flavored and sparkling waters.  The company operates four plants across the U. S. They service both refrigerated and shelf stable distribution systems and supply a wide range of customers in grocery, club, mass merchandise, convenience, dollar and drug channels.  For more information, please visit www.sunnyd.com.

Chris Buescher to No. 17 NASCAR ride; Ricky Stenhouse Jr out