RELATED: Eldora Speedway Comments on Lawsuit Against the Speedway and Tony Stewart Getting Dropped

Drivers will be allowed to return to competition with payment of the fine and fees imposed, following a request for reinstatement of their suspended DIRTcar membership.

“We’re happy this is over,” said DIRTcar Racing COO Tom Deery. “It is a waste of resources that should have been invested in the sport rather than damaging it and polarizing fans.”

Brandon Sheppard, among the five drivers originally involved, voluntarily withdrew from the case on September 9, 2016. 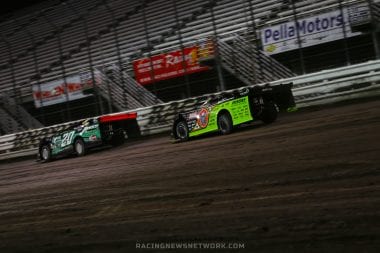 Tire samples collected from the #B5 driven by BSheppard, #22 driven by Satterlee, #20 driven by Owens, #33X driven by Thornton and #0 driven by Bloomquist and tested by an independent laboratory did not meet established benchmarks in a chemical analysis. A total of 32 samples were taken throughout the weekend, June 9, 10 and 11, from participants.

All five competitors were found to be in violation of rule 15.11-G and were fined in accordance with rule 11.1.

Rule 15.11-G.) Chemical alterations, vulcanizing, tire softening, defacing and/or altering the face of the tire lettering and/or tire stamping will not be permitted. Chemicals or tire softening is not permitted at any time. Tires may be inspected at any time. Any violation with any tire presented for competition may result in immediate disqualification from the events and/or other penalties including but not limited to; loss of money, fine, loss of points and/or suspension.

All five drivers were disqualified from the event, including the loss of all purse money and championship points earned during the event, fined $1,000 and penalized 1,000 DIRTcar Late Model points for the 2016 season. The total penalty, including loss of money, fine and the cost of the tire analysis was $19,630 for Sheppard, $4,655 for Satterlee, $7,630 for Owens, $10,930 for Thornton and $6,105 for Bloomquist.

Each was also placed under a three-month suspension from all DIRTcar sanctioned events, but this was delayed by their appeals.

On June 29, 2016, the World Racing Group Commission upheld the penalties issued. The three-member panel heard appeals in Indianapolis, and after deliberation, panel members agreed that the collection and testing of the samples followed accepted protocols and the samples did not meet accepted benchmarks.

As stated in the rule book, DIRTcar members in good standing can request a final appeal be heard by the World Racing Group Commission Commissioner Potestas. The five plaintiffs pursued this option.

In an effort to promote consistency for the length of suspensions, Darby decided that the final suspension should be defined by weeks, not months as prescribed in the original penalty. The original three-month suspension became a 12-week suspension from all DIRTcar sanctioned events, including World of Outlaws Craftsman® Late Model Series competition. The suspensions commenced on June 21, 2016 and concluded on Sept. 13, 2016.