In a rather interesting twist. The 2016 NASCAR Truck Series Non-Chase points were actually a closer points margin than with The Chase. That’s very differant than years past on the NASCAR Sprint Cup side of the oval racing ladder. 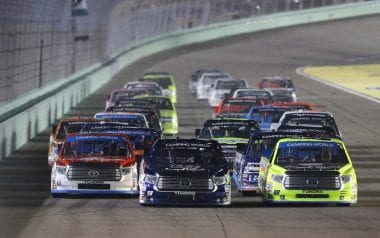 This season, Sauter matched his career high in wins with three (2013) and set a personal best in
single-season top 10s with 19. Sauter’s 13 career NASCAR Camping World Truck Series victories tie him for 11th most all-time in series history.

The driver of the No. 21 GMS Racing Chevrolet started his 2016 campaign with a bang – capturing his second career win at Daytona International Speedway and becoming the first driver to clinch a berth in the inaugural NASCAR Camping World Truck Series Chase.

Once in the Chase, Sauter breezed through the Round of 8 with three consecutive top 10s. The veteran stole the show in the Round of 6, winning back-to-back races at Martinsville Speedway and Texas Motor Speedway and following those up with a runner-up at Phoenix International Raceway to set the stage for his championship-clinching performance at Homestead.

Sauter’s previous-best championship finish was a runner-up in 2011 with ThorSport Racing. Until last night when he topped the 2016 NASCAR Truck Series points standings.

Also on Friday, William Byron won his seventh race of the season, capturing the series owner championship for the No. 9 Kyle Busch Motorsports Toyota.

Byron also was named the winner of the Sunoco Rookie of the Year Award. Along with his seven victories, Byron tallied 11 top fives and 16 top 10s.