Seymour, TN (December 31, 2016)- 411 Motor Speedway and CT Promotions presented the 7th Annual Hangover 40 on Saturday afternoon and Ray Cook of Brasstown, NC would take the lead from Donald McIntosh on lap 15 and hold off the charge of Mike Marlar over the final dozen circuits to score a $4,000 payday. 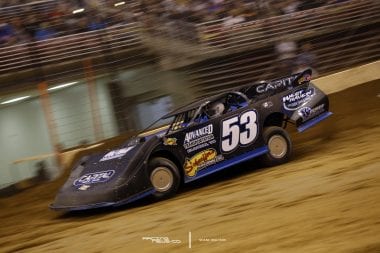 The win by Cook would come behind the wheel of his own A Plus Moving and Storage Company/Tommy Pope Construction/Motion Sensors/American Racer South/Schaeffer’s Oil sponsored #53 Capital Race Car sporting a Jay Dickens Race Engine.

Donald McIntosh would take the lead at the start of the event, with Justin Williams, Mike Marlar, and Ray Cook giving chase. McIntosh would build a comfortable lead early, while Marlar would work past Williams for second on lap 6 and bring Cook along into third, with Cook driving past Marlar for second on lap 7 as race leader McIntosh began to lap slower traffic. Cook would close in on McIntosh as the pair dueled for lead and Cook would ease past McIntosh on lap 15 entering turn three to take the top position.

The first caution of the event would fly on lap 18 when Shane Bailey and Carder Miller would tangle in turn one. The restart would see Cook motor away from the field, while Marlar would work past McIntosh for the second position, with Jason Welshan and Jason Cardwell battling for fourth.

The final caution of the race took place on lap 22 for a spin by Bo Eaton in turn two and under the caution, McIntosh would pull his mount pitside for the night with a broken rear-axle. The restart would see Cook and Marlar motor away from the field and by lap 35, the duo would have almost a full-straightaway advantage over third place running Jason Cardwell. 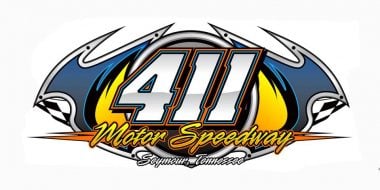 The lead duo would start working slower traffic on lap 38 and Marlar would close in on Cook and would challenge for the top spot on several instances over the final dozen laps of the contest, however, Cook would not be denied on this evening and would see the checkered flag first.

Marlar would settle for second, while Cardwell completed the podium finishers with a third place effort. Welshan and Russell Erwin would round out the top five finishers. The remainder of the top ten finishers in the event would be Stephen Breeding, Ryan King, Justin Williams, James Williamson, and Dustin Mitchell.

The Open Wheel Modified Brucebilt Performance A-Main feature event would see KC Burdette lead the initial 14 circuits of the contest before surrendering the lead to Jimmy Owens on lap 15 and Owens would maintain the top spot through two late race restarts, but Burdette would be determined to reclaim the top position and would make a charge around the top side of turns three and four on the 25th and final circuit coming to the checkered flag and Burdette would nip Owens in a photo-finish by 0.005 of a second to claim the $1,200 top prize.