For Michael Self, perseverance is more than a New Year’s resolution – it’s the driving force behind his first ever appearance at Daytona International Speedway for the 54th annual Lucas Oil Complete Engine Treatment 200 driven by General Tire, as he returns to competition with MDM Motorsports in the ARCA Racing Series presented by Menards.

Self returns to the track with Sinclair Oil Corporation as a primary partner for the No. 28 Toyota Camry. Last spotted during a strong top-three run in the 2016 ARCA Racing Series finale at Kansas Speedway, fans will get another chance to see Sinclair’s iconic “Dino” featured prominently on the hood, complemented by the traditional green, white, and red Sinclair livery.

“There really is no way to describe how fortunate and excited I am for the opportunity to compete at Daytona International Speedway,” Self said. “To be behind the wheel of the No. 28 Sinclair Toyota at Daytona is an almost unimaginable privilege. It really hasn’t hit me yet. I’ve been working on sponsorship opportunities to start the season at Daytona for more than five years, and now it’s actually happening with my dream sponsor, Sinclair Oil Corporation.”

The 26-year-old Utah native recently put the No. 28 Sinclair Toyota through its paces at the ARCA Racing Series open test at the World Center of Racing. After a successful two days of practice, Self is hoping his time behind the wheel on the 2.5-mile tri-oval will pay off for him during his superspeedway racing debut.

Adding to the list of first-times, Self’s effort will be overseen by newly-appointed MDM Motorsports crew chief Shane Huffman. This will be the duo’s first time working together with Self behind the wheel, but the two previously worked side-by-side as a driver coach/crew chief combo at Turner-Scott Motorsports. 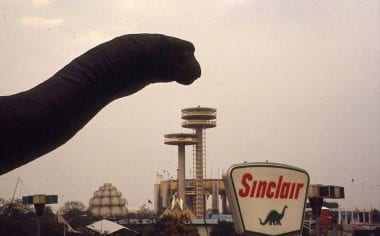 “Sinclair Oil Corporation is pleased to sponsor Michael Self at the Daytona International Speedway for the opening round of the ARCA series presented by Menards,” said Jack Barger, Sinclair’s Vice President of Marketing and Supply. “We are excited and proud to be the primary sponsor of the No. 28 Toyota Camry entry with Michael driving in the Feb. 18 race at Daytona. Michael is an outstanding young driver and an ideal representative for our brand. While Sinclair is beginning it’s 101 year in business, Michael brings youth, new promotions, and new customers to the Sinclair brand.”

“Working with Sinclair Oil Corporation and representing the iconic brand has been an incredible experience,” Self said. “Things went well last season at Kansas Speedway, and I’m looking forward to picking up right where we left off. I want to take the top-three finish with MDM Motorsports and try to carry that momentum into the 2017 season.”

The race is scheduled for Saturday, Feb. 18 with several days of on-track activity leading up to the event including practices and qualifying on Friday, Feb. 17. The Lucas Oil Complete Engine Treatment 200 driven by General Tire will be broadcast live on FOX Sports 1.

Zane Smith vs Michael Self at Salem Speedway (Video)