And it’s badass, awesome, clean all at the same time! This is the 30th year of racing for dirt late model driver Terry English. As he begins the anniversary season, son, Tanner English will drive the Terry English throwback wrap on his #96 dirt late model.

I love throwback cars, they just look better. Years of everyone trying to out-flash everyone else, nets us in a time period where the little details are lost, buried in heavy graphics. Strip all that away and you’re left with the minimalistic beauty of the dirt late model machine. In a sea of complex over-edited wraps trying to outdo one another, it’s the simple ones that stand out to the crowd.

Yet don’t let the appearance of the new #96 dirt late model fool you. The new throwback car will unload from a tall enclosed trailer. Under the old school wrap, modern day dirt late model technology will place the power to the track.

I have been wanting to do a throwback car of one of my Dad’s old designs for a while now… But what better time is there than this year, it is going to be his 30th year racing and this is the perfect way to celebrate it! Thanks for everything dad! #HeadedToTheHall 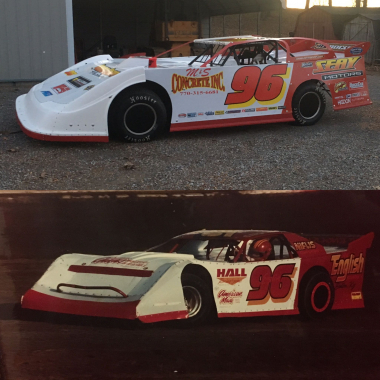 The throwback dirt late model wrap is based off one of two cars his dad, Terry English, ran in the 1991 racing season. It was the hand painting days, painted by Trent Niflis of Mitchell, Indiana. The car traveled the county in search of dirt tracks, 2 years before the now 23-year-old Tanner English was born.

Terry English won 18 races in 1991. It was nearly 19 wins, he was leading in the prestigious World 100 event at Eldora when things went south. His trip to victory lane was stripped as the motor went up in smoke, from the lead.

Tanner English talks about the history of the classic dirt late model driven by his dad. He explained, “Dad had two cars he raced that year, one was his personal car. The other car was owned by Gene Wring and Lance Walton (W&W Racing). They were both American Made Race Cars.”

The #96 dirt late model will make it’s debut soon. As soon as tomorrow, Tanner English and team are scheduled to unload for dirt track racing at Clarksville Speedway. The track is a 3/8-mile banked clay oval dirt track in Clarksville, TN.

The debut race for the Terry English throwback wrap is also the opening weekend for Clarksville Speedway. The Tuckasse Toilet Bowl Classic is sanctioned by UMP/MARS. The Tennessee dirt track event is a two day show, running March 3rd-4th. Saturday’s main event pays $5,000 to the winner.

View the photo album of the Terry English throwback car below.

An explanation of the Tanner English and Bobby Pierce controversy

Tanner English to SWR Racing in 2019