Dale Jr on Pole: “I saw things from my car that were concerning”

Despite having the quickest car and starting from the pole, he’s concerned. 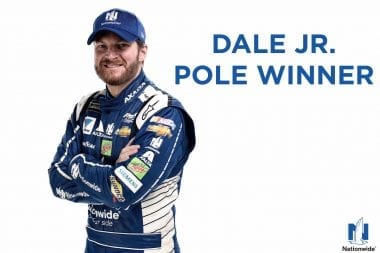 In practice, Dale Earnhardt Jr only worked on race trim. How much confidence does he have leading into tomorrow nights Coke 400? Dale Jr stated, “I’ll be honest with you. This tracks a little slick and starting to age.”

Yesterday, in final Monster Energy NASCAR Cup Series practice the track was all but deserted. Only 19 cars took to the track, less than half the field.

Dale Earnhardt Jr continued, “I think that all the competitors and crew chiefs need to probably consider spending a little more time drafting and putting a little more laps on the cars. I sure would have like to have had the opportunity to get in a little larger pack yesterday.”

“I saw some things from my car that are concerning as far as the balance. I don’t know if a lot of guys got themselves in that situation.”

He explained, “These days, with the repave, we’ve kinda calmed down on practice. Nobody really practices that much. The tracks getting slick again. I think guys need to start practicing a little more. I would have liked to have done that a little more.”

Daytona polesitter Dale Earnhardt Jr is hopeful, “Hopefully our car handles good. You know at night the tracks going to have a lot of grip. We’ll see how that all works out.