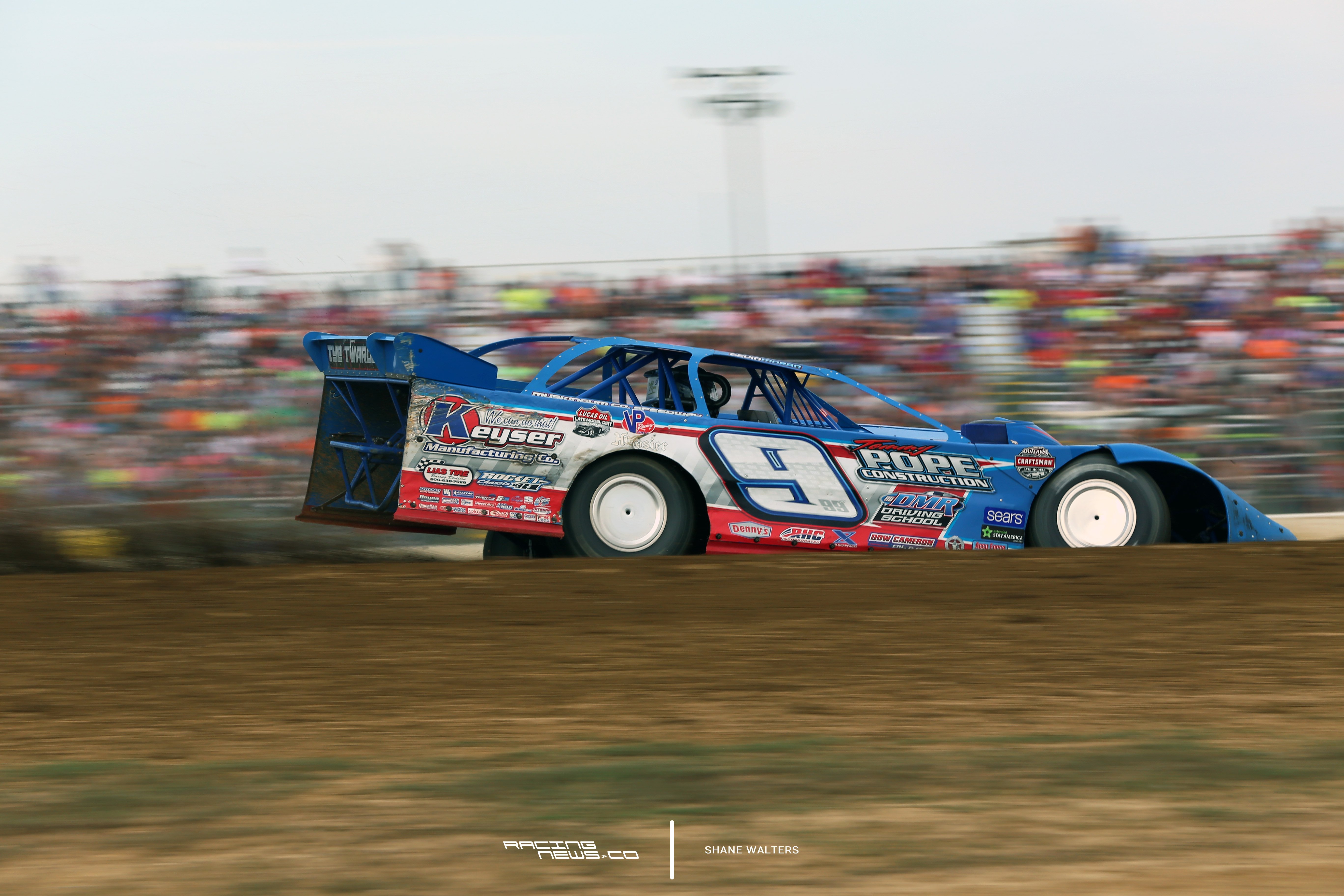 Qualifying
The hometown kid starts off on the right foot. Quick time for Devin Moran. Jimmy Owens spun out on his final qualifying lap. The dust ruined from the spin ruined Moran’s final lap. Per LOLMDS rules he got to start over and complete the lap. Right to the top of the board.

Josh Richards pulls out the backup. He will start from the tail. An oil pump went bad on the primary. Richards was fastest in Group B qualifying. 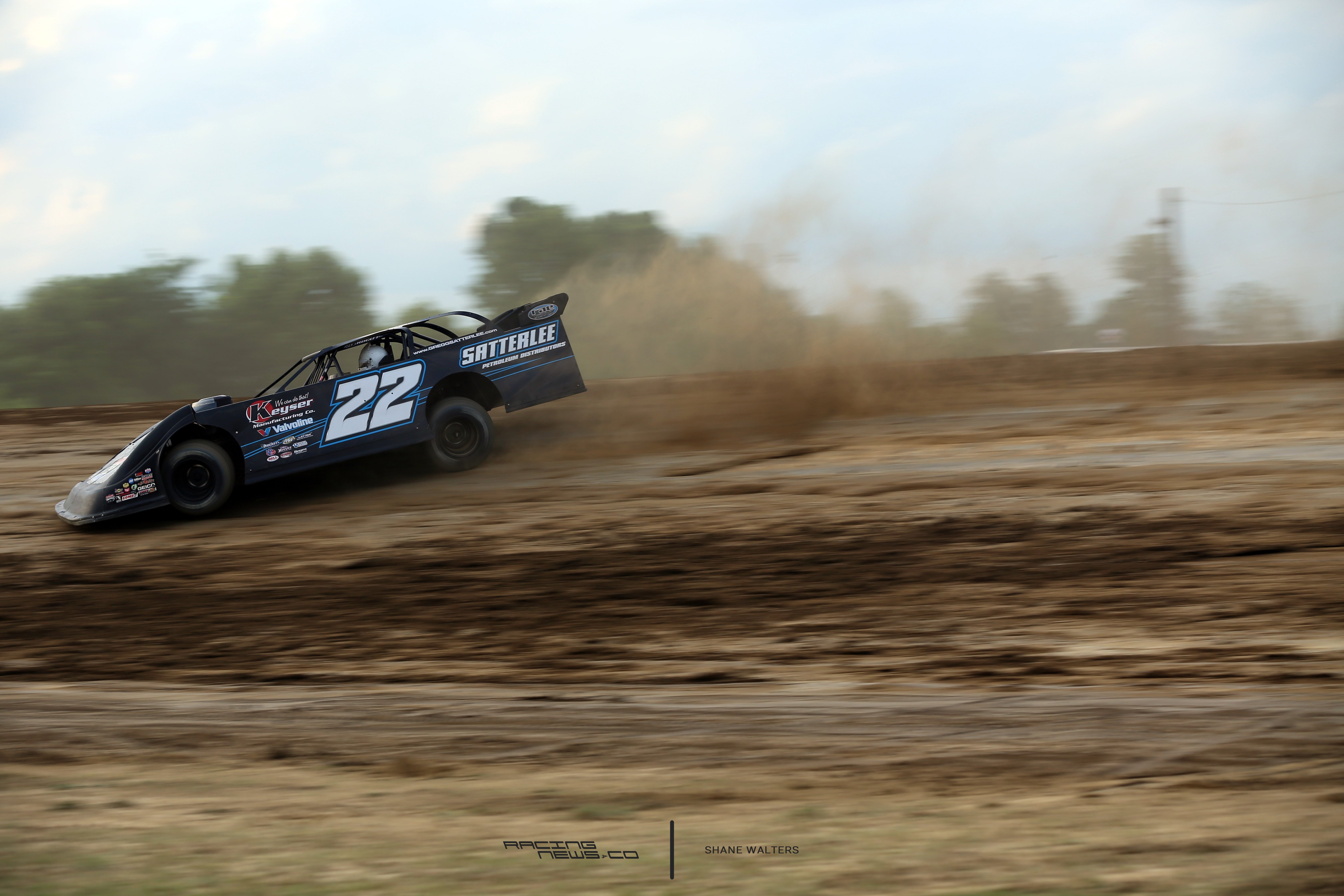 Heat 2
Green. Gregg Satterlee gets the jump on the restart. He begins to drive away from a Mason Zeigler. Caution. Dennis Erb Jr has blown up. Green. Satterlee, Zeigler and Owens run a car length distance between each other for the lead. Satterlee drives to the win in heat 2.

Heat 3
Hudson O’Neal jumps right to the top. The rest of the field migrated to the bottom. Nobodies run low in any of the previous two heats. Boom Briggs has slipped under Bloomquist. Cautions, debris.

Green, Bloomquist drives it deep in turn 1. Slider, he slides up and parks it in front of Briggs. Bloomquist to 2nd. 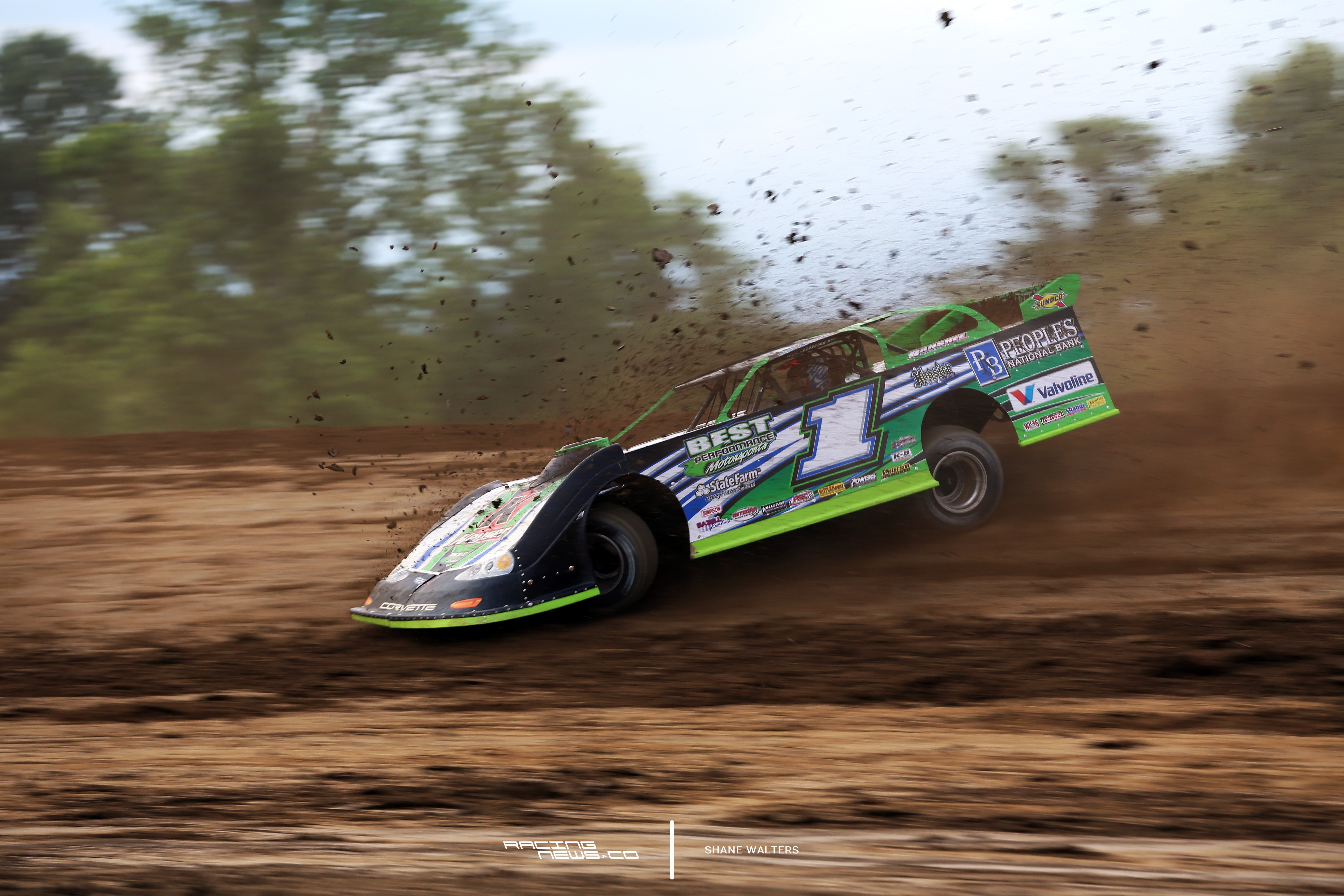 Josh Richards is coming. Slider after slider in turn 1. What a fantastic race track! He’s up to 4th. Woah, he drove in a bit to high in turn 1. Up and over the berm. Caution. Green, the Conley’s have tangled. They stack up the field. Caution.

Green, just a few laps to go. Hudson O’Neal still leads. 2 to go, O’Neal is over the berm too. He drove it in a little too hard! Bloomquist slips passed. New leader. Bloomquist wins heat race number 3. O’Neal holds on to 2nd

They finally get going. Eddie Carrier Jr drives away with the win in the 4th and final heat.

Weather is in the area. They pushed the late model show up on the program order. Feature on track by 9:00. Good move by the track owners.

Dennis Erb Jr has rolled out the backup. An un-lettered car to start the main. 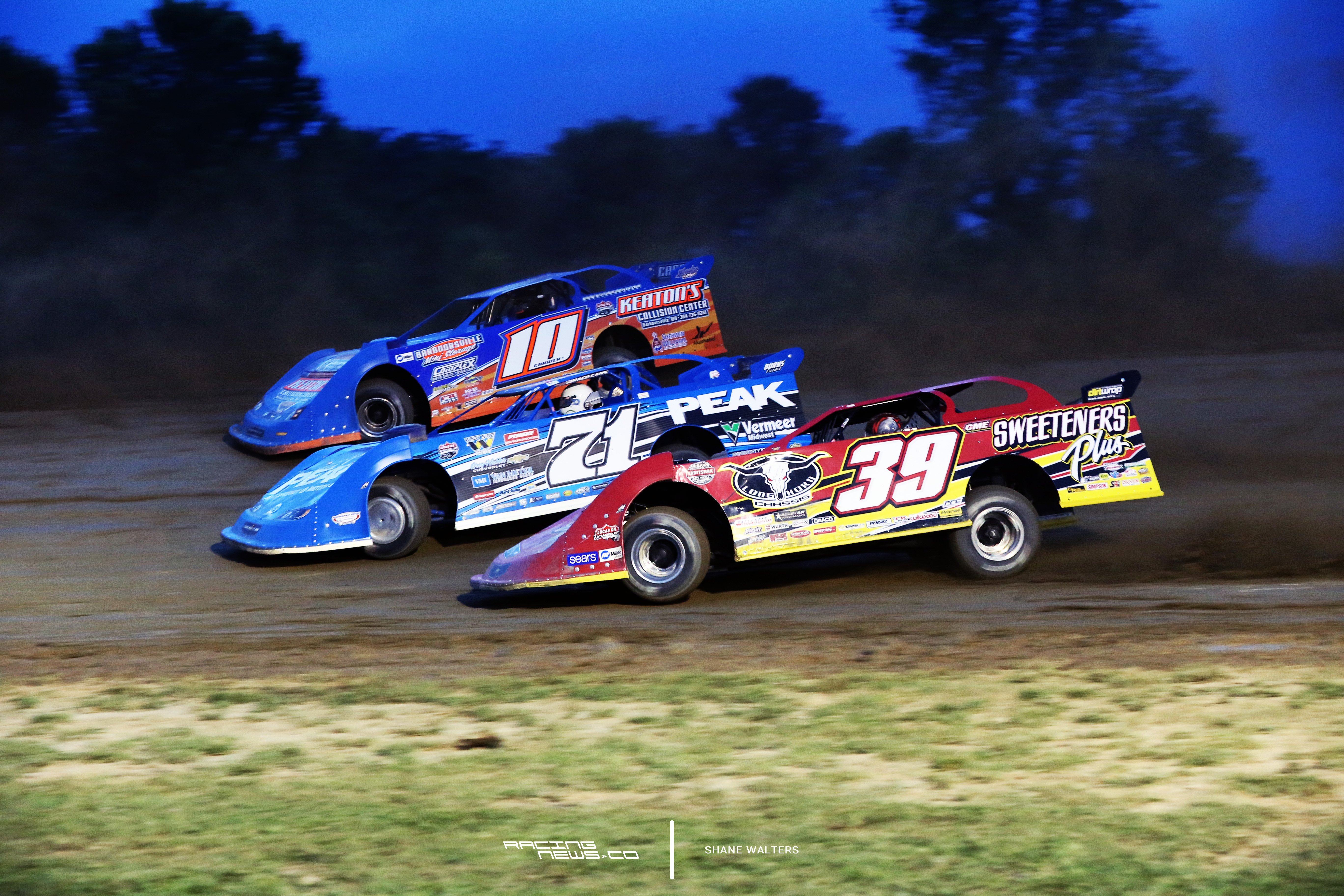 Main Event
Devin Moran and Scott Bloomquist will lead the field to green. Green flag, 3 wide behind them into turn 1 for the top 5 positions. Devin Moran leads. Gregg Satterlee is in trouble, he pulls off before they get to turn 1. Caution, Lanigan is into the pits. Lap 2.

Green, Devin Moran is gone. The track is rutted a bit from recent weather. But it’s making for some great racing. Bloomquist and McCreadie choose to run through the bumps at the exit of turn 2. 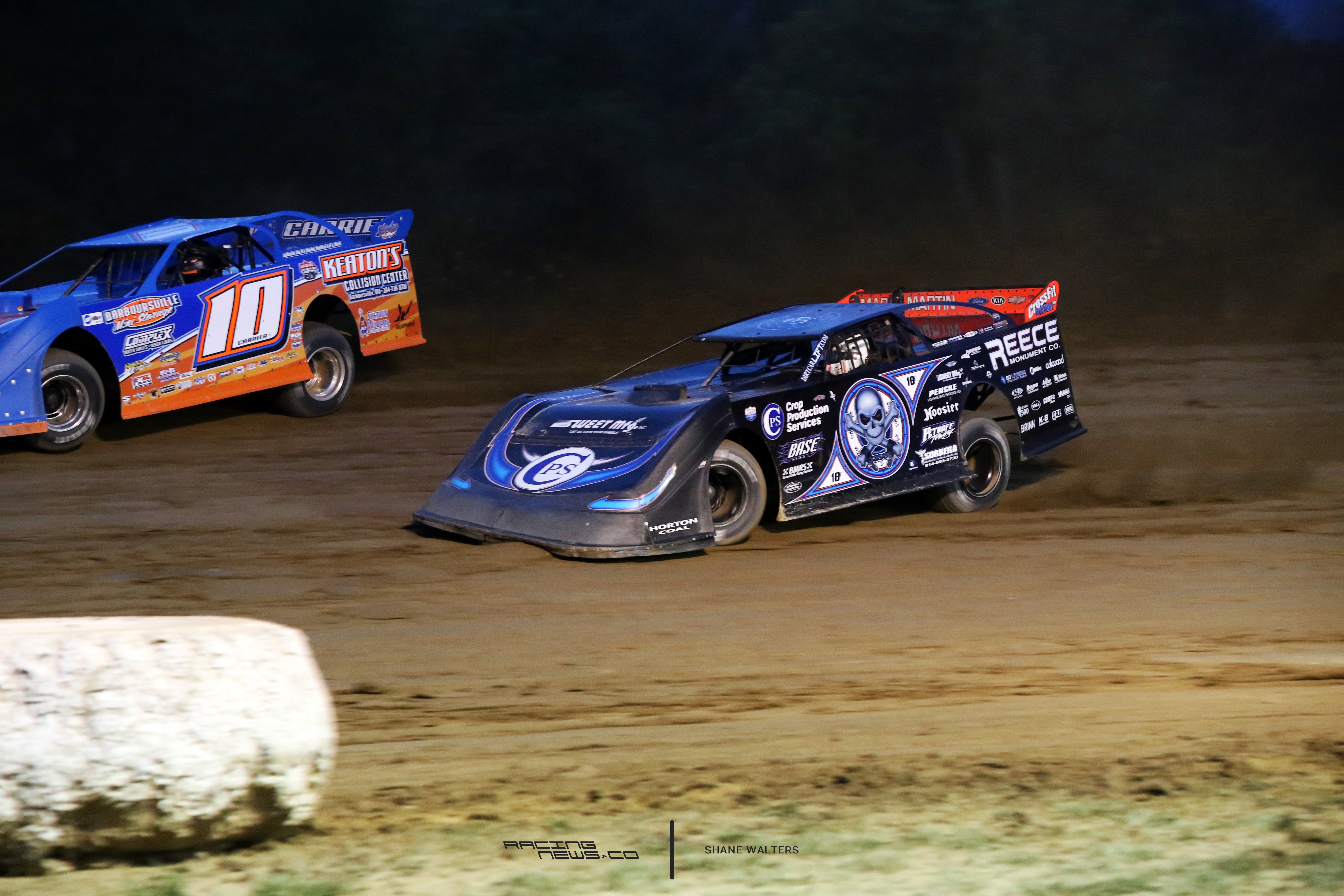 Green. Eddie Carrier Jr drives it hard on the outside of turn 1. He catches the cushion, drives around Bloomquist for 2nd. Most of the field is migrating low, Moran is up against the top inch of the track.

Bloomquist begins catching Carrier Jr. They run side by side, lap after lap. Caution. Francis has a flat.

Green. Scott Bloomquist is back around Carrier Jr, just a better jump on the flag. He sets sights on Moran. He at his bumper at the exit of turn 2. Caution. Debris.

Green. Carrier Jr is back around Bloomquist. Now he’s running down Moran. Trouble turn 4! The leader has blown a tire! Moran hits the pits but doesn’t return. 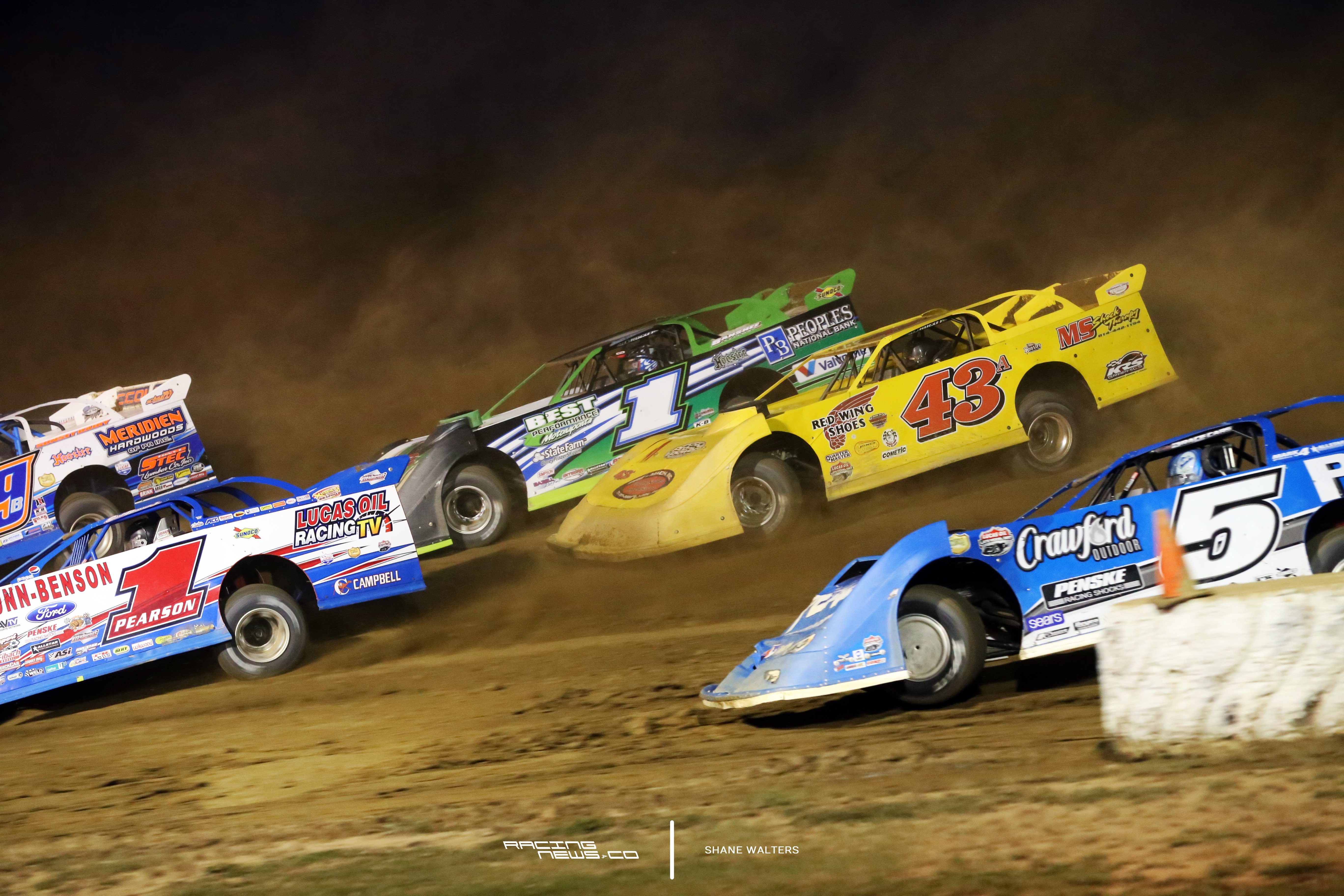 Richards is having a hell of a fight with Mason Ziegler. Zeigler has dived under him twice, then over shot the exit and over the berm. Scott Bloomquist is reeling in Eddie Carrier Jr. Long green flag run.

Bloomquist is in trouble! I hear sputtering, the mechanical troubles are back to get him again. He’s losing ground to the leader, quickly. Hudson O’Neal is easily around Bloomquist. Tim McCreadie too. Caution. Bloomquist is in, he doesn’t return. Another mechanical DNF.

Another solid run for Hudson O’Neal. He got his best Lucas Oil Dirt finish of his career last night. Well, he beat it tonight, 2nd for Hudson.

Eddie Carrier Jr from victory lane, “Thank you to Longhorn Chassis, as well as Rick and Jake Keaton for giving me such a good car. I am a big guy and to find a car that fits is tough sometimes, but we have had something special going on the last two weeks. We won at Florence last week and to come here and beat these guys, that’s huge.”

The winner continued, “Scott’s [Bloomquist] going to race you clean; he and I have run together so much over the years that we know what to expect out of each other. I was fighting and trying to hold him off.”

Hudson O’Neal get’s his best finish of the season, “What an amazing race track and race, Donnie [Moran] knows what he’s doing. Tim [McCreadie] and I had good race, once I cleared him I thought I had a shot at Eddie. I have to go down there and thank my crew. They have given me a great race car the last two nights.”

McCreadie from the podium, “Man, when I passed little O’Neal I thought I had a good shot at the win, but he came back and got back around me. The bottom just never took off all night. He [O’Neal] and Devin [Moran] are respectful on and off the race track. It’s hard to find that nowadays there are some that forget where there right rear quarter-panel is.”

Next up is a brief break for the Lucas Oil Late Model Dirt Series. In the blink of an eye they will be at it again. The tour heads to Fayetteville Motor Speedway in Fayetteville, NC on July 6th. Cherokee Speedway in Gaffney, SC is on the books for July 7th. The weekend tour comes to a close at Smoky Mountain Speedway in Maryville, TN on July 8th.

Gregg Satterlee picked up the win at Muskingum County Speedway