Spencer Gallagher hasn’t ruled out being a racing driver entirely stating that he could go dirt racing, “That’s where the real fun is anyway.”

Spencer Gallagher: “It’s no secret that in the next 20 years, the way we get around is going to undergo a fundamental upheaval. The likes of which we have not seen since the horse and cart became the car.”

Spencer Gallagher is going to finish out the 2018 NASCAR Xfinity Series season. For 2019, he’s going to hang up the driving suit and put on a different kind of suit.

The decision to retire was abrupt. He didn’t even tell the team he was going to do it. He just walked into the press conference and announced it.

“I will no longer be competing in the NASCAR Xfinity Series. I will be stepping out of that role as a driver and taking on a managerial role at GMS,” Spencer Gallagher stated from the Kansas Speedway media center.

GMS Racing is the little team that could. But, they’re not so little anymore and the team has 8 wins in the NCWTS for 2018. Johnny Sauter currently sits at the top of the board in the Round of 8 of the NASCAR Truck Series playoffs.

“We aim to win a championship with the quality of stuff that we’re able to build. It has been incredible to watch this team grow from very humble beginnings.”

“This is not me stepping back from NASCAR. If anything, this is me diving in further. GMS started out surrounded by Spencer Gallagher. Since then, it’s grown to something so much more.”

“I think there’s so much opportunity inside this industry, inside this sport that we love.”

Currently, GMS Racing fields multiple machines across multiple NASCAR series. The bulk of their efforts are focused on the NASCAR Truck Series. Johnny Sauter and Justin Haley run full-time for the team in the NASCAR truck Series.

Both of those drivers have advanced to the Truck Series playoffs. Tyler Dippel and Sheldon Creed are set to join them, running the final four races of the season.

In the NASCAR Xfinity Series, the team fields a single car effort. That driver is Spencer Gallagher. Gallagher won his first full-time season in 2017. In 2018, it was more of the same at the beginning. He went on to pick up his first career win.

“The trucks are still an ongoing effort as well our Xfinity car be. Cup is always on the table for us. That’s where we want to be.”

“Candidly, I’ve spent 10 years away from my family.”

“I think there are big opportunities within this sport, within this industry. I intend to pursue them aggressively. I think being outside of the driving role enables me to do that.”

“I’m not scheduled to resume NASCAR competition at any point at this time. That could always change. I do love me some plate truck races.”

“I think racing is a incredibly fascinating intersection of the auto industry and the high science and technology. That’s where I came from. For those that don’t know, before I did this, I was a professional nerd.”

“I think a lot of my former skill sets are transferable to this industry. I can’t talk about any of the stuff I’m going to be doing until I get to doing it. Trust me, I’ve got big things planned for GMS and this industry as a whole.”

“A professional nerd is responsible for any and all technical wizardry. Nerd-ism isn’t necessarily one skillset you learn. It’s more like being a fabricator.” 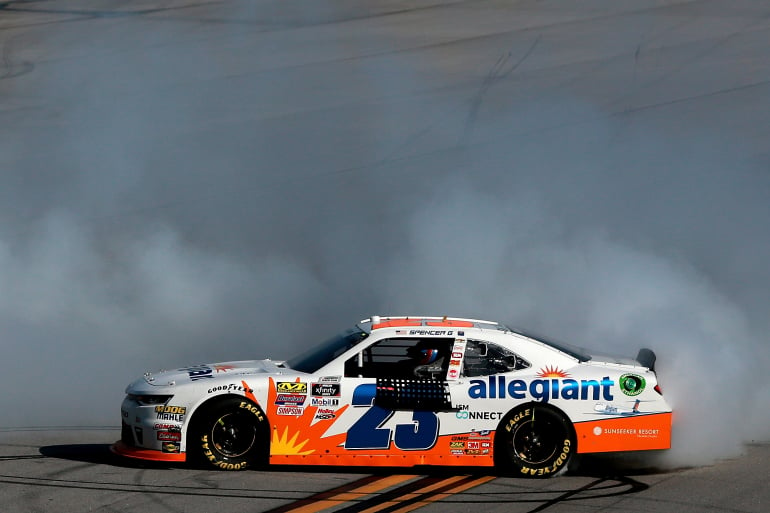 “From day one there, I’ve always assumed my title to be whatever you would consider the lowest man on the totem pole. My position at GMS is one of servant. I’m just going to be there to make thing run right and make them better.”

“This is the hardest decision I’ve ever had to make. The problem with being a driver … If you’re going to be a driver, that’s generally all you can be.”

“That doesn’t leave a lot of room for other ventures. I’m a businessman’s son. At the end of the day, I see opportunity out here. I feel a calling within me to go chase it. Candidly, this sport could use young, fresh minds in leadership roles.”

Spencer Gallagher is the son of Maurice J. Gallagher Jr. Maurice is the CEO is Allegiant Airlines. Maurice is also the owner and founder of GMS Racing.

“I’ve got a lot of connections back in Silicon Valley. Racing can be a unique crucible again for the building out of automotive technologies that are getting ready to hit us.”

“It’s no secret that in the next 20 years, the way we get around is going to undergo a fundamental upheaval. The likes of which we have not seen since the horse and cart became the car.”

“This place can have a lot more to do with that than a lot of people give it credit for.”

The sudden retirement has come as a bit of a shock. Gallagher is only 28-years old, he still has a lot of life left in his racing career. With the recent win, you could argue that Gallagher has just reached the prime of his driving career. Now, he’s out. Why?

“Don’t get me wrong, it has to play a role. Taking hits to the head at 190 mph for a living — not necessarily the best thing for your long term health.”

“That’s always in the back of our heads, every time we take onto the race track. But, frankly, that’s why we’re race car drivers. We’re the only one’s dumb enough to ignore that fear and go do this for a living. That’s what makes it fun.”

“But, there’s been no health concerns of mine. I’m grateful for it.”

Did the suspension play a role in the retirement announcement?

Just after Gallagher picked up his first career win, NASCAR issued a drug test. Gallagher tested position and was suspended. He went through the Road to Recovery program, missing 7 races.

“No, not particularly. This is a life decision and a business decision as well.”

“This entire thing is bigger than Spencer Gallagher. Nothing matters more to me than these three letters on this shirt. The best way I can grow GMS is from atop the box rather than in the seat.”

Who’s going to fill the seat in the Xfinity car?

“We’re interviewing any and all possible candidates. As of right now, the seat’s open season. I believe we have great stuff and we’re taking auditions.”

Spencer Gallagher hasn’t ruled out being a racing driver in it’s entirely. “I may go dirt racing. That’s where the real fun is anyway,” Gallagher told Claire B Lang via SiriusXM NASCAR Radio.

Spencer Gallagher has been suspended indefinitely