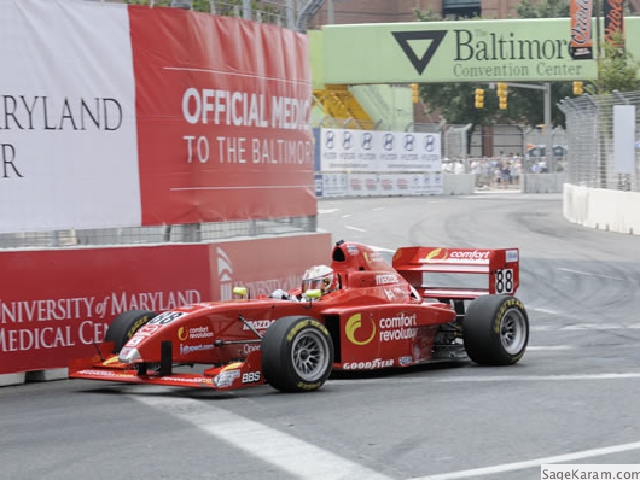 NAZARETH, PA (SEPTEMBER 6TH, 2011) Over the past weekend, Andretti Autosport’s Star Mazda championship driver – Sage Karam, made a huge step towards securing the Rookie of the Year award and also a run towards the championship standings. Karam posted a huge second place finish at the Baltimore Grand Prix. The podium finish boosted Karam’s resume to finishing an outstanding 7 out of 10 events in the top 5!

“The series is just so competitive. It’s hard to believe that we have so many respectable finishes and are still only 5th in the standings.” Karam sits only 2 points out of 4th and 3 points out of 3rd. “It’s easy to point to the penalties at Mosport and Trois-Rivieras as reasons for not being in 2nd place, but I probably could have done a better job driving at St.Pete and Barber too. It was all part of the learning process”, said Karam.

The Comfort Revolution/MazdaSpeed Scholarship driver heads into Monterrey’s Mazda Raceway with a load of confidence. “Obviously, we have improved a lot as a team and I have made a lot of progress as a driver. It is the first year for both me and the team in Star Mazda; I believe we were respectable at every venue. It’s my last race as a member of the MazdaSpeed driver family in Star Mazda. I want to give John Doonan (Director of Mazda Motorsports) a proud result at Mazda Raceway. Hopefully we will convene on other Mazda programs in the future. I believe that once you are in the Mazda family, you never really leave it”.

Baltimore was a sweet ending to an up-and-down weekend for the 16-year old. Karam started Friday’s only practice in P1 by an amazing 1.1 second margin over the next fastest driver. Due to track repairs and setup, Saturday’s qualifying was replaced with another practice session. It was during this session that Sage found the limits of the #88 in turn four and tapped the wall. The accident caused Karam to sit out the session. “It was a surprise to damage the car. I only had damage on two other occasions (St.Pete race and Indy practice) and I am usually pretty good at taking care of my equipment. Repairing a car on race weekends really sets a team back. I know the team really appreciated my ability to keep the car out of trouble all year long”.

Qualifying for Sunday’s race was relegated to the point’s standing and Sage was forced to start in the 5th position.  With only 10 laps on the track, the top American teenager made quick work of advancing into the top three spots. Karam held this position until an opponent’s error moved Sage into the 2nd spot. The race finished under yellow and Sage crossed the finish line in 2nd place. “Yea, I was hoping for a restart. I knew Tristan couldn’t afford to tangle with me on a restart, because of his pending championship. But I also knew he wouldn’t just step aside and let me by neither. But, we ran out of time and the green never came. I think we proved a lot this year, but I still have some unsettled business”.

Follow Sage Karam at www.SageKaram.com and get instant updates on twitter.com/SageKaram88

Investing in Sage is easy and exciting. Anybody interested in latching onto this young American open-wheel sensation, should contact us at karamjody@msn.com.

Check in at www.SageKaram.com to keep posted on the latest news, photos, and much more.

Based in Indianapolis, Andretti Autosport is led by racing legend Michael Andretti. Andretti Autosport, which is the winningest team in Indy Racing League history, fields multiple entries in the IZOD IndyCar Series. Andretti Autosport also campaigns two cars in Firestone Indy Lights in a joint venture with AFS Racing and one car in the USF2000 National Championship. The company boasts three IZOD IndyCar Series championships (2004, 2005 and 2007), two Firestone Indy Lights titles (2008 and 2009) and has won the Indianapolis 500 twice (2005 and 2007). For more information, please visit www.AndrettiAutosport.com.

About Sage Karam
Sage Karam is a talented young American racing driver launching a career in competitive open wheel racing through the USF2000 National Championship series. He has previously competed in various karting series, eventually becoming a 35-time World Karting Association and IRL Stars of Karting National champion. At the age of 13, Karam was the youngest driver to win the annual Skip Barber Karting Scholarship Shoot-out. In addition, he was the only American driver to compete in both a national karting championship and an open-wheel professional series fulltime in 2009.