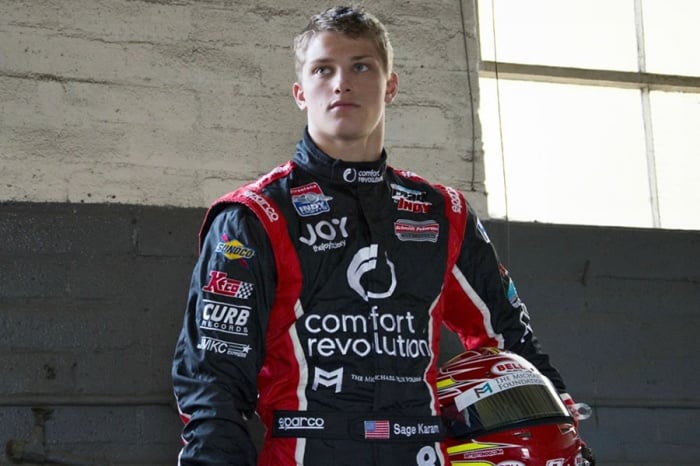 DENVER (JUNE 12, 2013) – GP Sports Management, known worldwide for managing some of today’s greatest race car drivers, announced today that they have signed 18-year-old Sage Karam to a driver representation agreement.  Karam is currently a rookie driver in the Firestone Indy Lights Series for Schmidt Peterson Motorsports, where after four races he sits firmly in fourth place in the driver’s points standings, just two points out of second.  Sage will be racing this weekend at The Milwaukee Mile.

“Sage came to us highly recommended and we intend to help him achieve his aims as an international race car driver just as we’ve done for so many drivers over the years,” said Julian Jakobi, Chairman, GP Sports Management.

“We think Sage Karam is a superstar in the making and we’re really excited to welcome him to the GP Sports family,” said Mickey Ryan, Vice President, North America for GP Sports Management.  “Dan Wheldon told us to keep our eyes on Sage back when he was racing go-karts six years ago, so to now have the opportunity to represent him and help him achieve his career racing goals is fantastic.  Whether it’s INDYCAR or Formula 1, we think Sage is the full package of raw talent and marketability for any brand and any team looking to make their mark in motorsport.”

“This is a really crucial time in my racing career and I’m excited to have GP Sports Management in my corner moving forward,” said Karam.  “They have an excellent reputation in the industry with important contacts on both sides of Atlantic and that ultimately gives me a lot of options in racing, which is a good thing as a driver.  Combined with the support of Michael Fux and Comfort Revolution, I’m pumped for what the future holds.”

Karam is a Pro Mazda “Road to Indy” scholarship winner, having dominated the 2010 USF2000 National Championship with Andretti Autosport, recording nine race wins and 11 pole positions in 12 starts.  In 2011, he moved up to the Star Mazda Championship and won “Rookie of the Year” honors with two wins.  Voted the Most Popular Driver in the Pro Mazda Series, Karam became the youngest driver to ever win a race in the championship.  Previously he competed in various karting series, eventually becoming a 35-time World Karting Association and IRL Stars of Karting National champion.  After finishing third in the Pro Mazda driver’s championship with three race wins for Andretti Autosport in 2012, Sage moved up to drive the #8 Comfort Revolution car for Sam Schmidt in the Firestone Indy Lights Series this season.