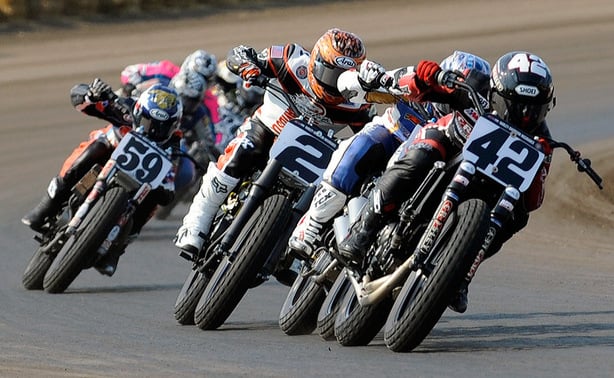 (SPRINGFIELD, IL) Bryan Smith (Crosley Radio/ Kawasaki) notched his second AMA Pro Flat Track win of the season and looked outstanding the whole way during Sunday’s AMA Pro Harley-Davidson Insurance Grand National Championship presented by Motorcycle-Superstore.com and Lucas Oil main event at the Illinois State Fairgrounds. Smith got the most out of his Kawasaki today as dominated the straightaways at the legendary Springfield Mile.

“I couldn’t have done it without my team, they built one awesome bike, I’m very fortunate to be able to ride for them,” Smith said. “I felt going in that I’m the best on mile tracks and I definitely got the best out of my bike today. This was a big win for me.”

Smith’s resume indicated that he was one of the favorites going in to today’s race as he consistently excels at mile-long tracks and today was no exception. The Michigan native claimed the lead on lap 5 and though he had it taken away several times coming out of the turns, he promptly reclaimed it every single time on the back and front stretches.

The major threat to Smith’s lead came on lap 24 when he slid a little too wide in turn 2 and surrendered it to Sammy Halbert (Southeast Harley-Davidson). Smith dropped back a couple slots on the mishap but it seemed like it was all part of the plan as he slammed the throttle on the back-stretch and crushed all hope of any rider thinking they had a chance.

Halbert, Jake Johnson and Jared Mees (Rogers Racing/ Harley-Davidson) gave Smith a good run but on this day, on this track, it was inevitable that Smith was deemed the victor.

The AMA Pro Motorcycle-Superstore.com Pro Singles main was an absolute thriller as Cody Johncox (Sunnyside Cycle/ Yamaha) won by a scant .004 seconds over second-place finisher Zakk Palmer (Western Hills/ Honda). The race was literally up for grabs coming down to the final turn as riders were four wide going down the back stretch. Palmer slammed the throttle on the final stretch and came away with a big win.

“I tried the whole race to get down low, and when I did, I finally got some traction and was able to pull out the win,” said Johncox. “This is definitely the biggest win of my career and I’m so happy it came here in Springfield. I really have to thank my sponsors and team, they are a huge reason why I’m standing here today.”

It was a tight clean race the whole way up until lap 9 when two riders went down, resulting in a staggered restart. Riders were four-wide for the better half of the remaining laps with several lead changes all the way up until the end. With three laps to go, Stephen Vanderkuur (Parkinson Brothers Racing/ Honda) had the lead and looked as if he might take the win and increase his lead in the point standings but it just wasn’t in the cards today as he finished in seventh place.

Michael Bickerton (Hogwrench Racing/ Honda) had one of his best races of his career as he found himself on the podium for a third place finish. Cole Anderson (Diesel Minnesota/ Honda) and Jason Isennock (High Dairy Stores/ Honda) finished in fourth and fifth places, respectively, to round out the top five.