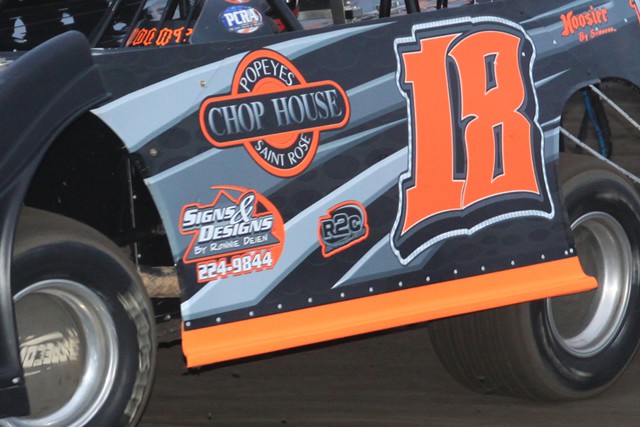 At seasons end, twenty-four year old Dauderman has now been crowned the winner of the UMP Pro Late Model National Championship as well as the Pro Crate Racers Of America Regional Championship for the teams relentless efforts. Winning nearly half of the races entered and finishing in the top three seventy percent of the time, a championship or two was a given.

Championships are won by far more than the person in control of the wheel. The time and effort put forth by a determined crew chief (Chad Schuster) and the whole team along with the sacrifices made by their families allowed Dauderman to keep his #18 Rocket Chassis at the front of the field week after week. Rewarded for their efforts, BDR can now proudly display two highly sought after trophies.

Frequently, the Bobby Dauderman Racing hauler could be found in the small town of Highland, IL near the quarter-mile bullring. Highland Speedway, where drivers bounce the right rear off the outside retaining wall searching for the last inch of traction next to the concrete. Dauderman invaded nine races at the dirt oval, bringing home four wins and completing the season with an average finish of second at the speedway.

Tri-City Speedway, another popular stop on the 2012 tour saw another nine visits from nearby located BDR. Picking up a single win while finishing in the top five a total of six times, the team would see better luck on the road.

Traveling to nine unfamiliar tracks in four Midwest states, several for the first time in his career, Dauderman and his team would top the travelers and locals alike for a dominating twelve wins on the road. Making Dauderman the only UMP National Champion in the history of the division, to win the national title without winning a weekly track championship in the process.

Traveling to nine unfamiliar tracks in four Midwest states, several for the first time in his career, Dauderman and his team would top the travelers and locals alike for a dominating twelve wins on the road. Making Dauderman the only UMP National Champion in the history of the division, to win the national title without winning a weekly track championship in the process.

A special thanks needs to be given to the fans for showing their support all season. Not just followers of the #18 dirt late model but dirt racing fans as a whole. True motorsports enthusiasts, who without their support none of this would be possible for any driver or team.

BDR now anticipates the 2013 racing season. Work will begin over the coming months both in and out of the shop. Building on the success of the 2012 season, the team is working to secure an engine sponsor to compete in both the Pro Late Model and Super Late Model divisions in 2013.

Stay tuned to the teams social media page and website (http://www.BobbyDauderman.com) throughout the racing season to receive up to the minute updates. The team website is updated regularly with event changes, race results and event recaps. Be sure to browse the photo albums as well for any race fans entertainment purposes provided from within the team operations.

To learn more about sponsorship opportunities with Bobby Dauderman Racing, please visit the dirt late model team website. They would be happy to go in to detail with you about how motorsports marketing can help to grow your business.

PREV POST
NASCAR TRUCK: No Prelude, But Maybe A Truck Race At Eldora?

NEXT POST
F1: Worlds Collide As Formula One Returns To America

Kyle Larson rarely involved in NASCAR confrontations; They aren’t for him