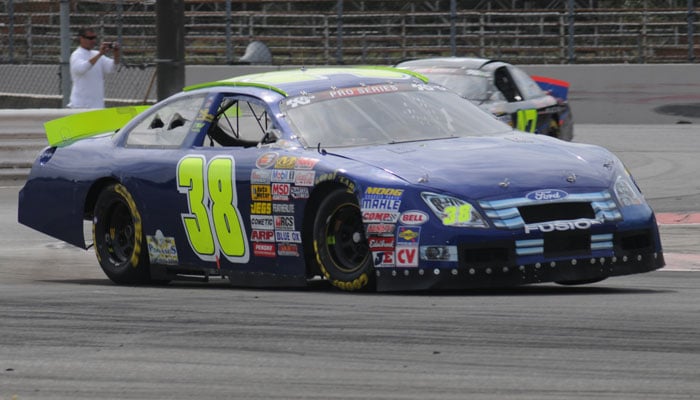 The braking point markers were whizzing by at an alarming rate.

Zack Huffman was charging down the front straight of Portland (Ore.) International Raceway, heading nearer and nearer to the infamous right-left-right complex of corners that make up the track’s signature chicane.

He stood on the brake pedal and pushed with all his might.

And never got his rent-a-ride racecar to slow down enough to make the corners.

It is what happens when you try to convince a short track car it’s a road-course warrior.

“Ya just drive what ya got,” he explained. “I keep out of everyone’s way and try to have a good time out there,” he said.

Normally, Huffman is a regular at the Stockton (Calif.) 99 Speedway oval near his hometown of Manteca, Calif., but on occasion he gets to run with the NASCAR K&N Pro Series West.

The 33-year-old is not your typical rent-a-ride racer on the NASCAR tour. Rather that writing a healthy check and slipping into the seat of a pristine car prepared by one of the front running teams, Huffman pays for his rides with sweat equity.

During most K&N series race weekends, you can find him under the hood of the No. 38 Ford Fusion, working on the car for someone else to drive. The Ford is owned by John Wood, and is entered by Ryan Philpott Racing. It is available to drivers looking for a taste of NASCAR racing, but who don’t have the budget for a top of the line ride from one of the high profile teams.

But when there is no one to rent the car for a series race, Huffman gets the chance to drive it for the cost of fuel and tires and post-race repairs.

Huffman finished 20th at Evergreen Speedway in Monroe, Wash., and 17th at Colorado National Speedway near Denver. At the NAPA Auto Parts Salute to the Troops 125 on the Portland road course, he squeezed into the field with a 28th-spot qualifying run.

For people who know Huffman and his history, they know for him to compete in the “Salute to the Troops” race was especially gratifying. Long before he got behind the wheel of a NASCAR stock car, he was serving in the military.

“He entered the Army right out of high school,” said Wes Huffman, his father. “His mother and I had to sign for him, because he was only 17 at the time.”

Wes said Zack’s family has a history of military service that goes back generations.

“I had a bunch of National Guard uniforms and stuff hanging around when Zack was growing up, and he’s put that stuff on over the weekends and played Army with it,” he said.

So while most of his high school classmates went off the college, Zack went off to war.

“I wasn’t big into school, but I liked working on machines and figured the Army would let me do something for my country while getting more training,” the younger Huffman said.

He finished his training just in time to be sent to Iraq in Operation Desert Fox, which was part of the run up to the invasion of Iraq, but before the 9-11 attacks.

His first tour saw him mostly in support areas, working on equipment headed to or returning from battle. During his second trip to Iraq, things became much more intense.

“We spent a lot of 16-hours days in the heat, driving equipment in convoys. Our convoys came under fire a number of times.”

Part of his job was to go into combat zones with the military version of a wrecker truck to bring back equipment that had been damaged or disabled.

“The combat guys would set up an area and try to keep it safe, but there was firing all around while we were trying to do our job. Some guys freeze up and just can’t even move under those conditions. My second nature was to just focus on the equipment. You just had to put all that other stuff out of your mind and concentrate on what you were supposed to be doing, but I’ll admit there were times I’d hook up to a vehicle and just tow it out of danger as fast as I could.”

He was injured when, during a blinding dust storm, his vehicle went off the road and down an embankment.

“There was zero visibility,” he said.

“It is the type of place where if you weren’t there, you can’t imagine what it was like. I’ve seen enough for a couple of lifetimes.”

“People ask me if I ever get scared in a race car,” he said. “Hell, these guys just want to beat me…they aren’t trying to kill me. I’ve been in that situation, and racing is a lot safer.”

His dual role as a mechanic and driver keeps Huffman busy on race weekends. On Saturday of the Portland weekend, he spent far more time under the car than in it.

After the second round of practice, he climbed out the driver side window, shed his driving suit and dove under the hood for more tuning and repairs. He was in familiar territory.

Huffman and his dad haul their tires and equipment in a semi-enclosed trailer they tow behind the family car. When the race days are over, they drive through the night so he can go to work maintaining equipment at an Army depot near their home.

“I still love working on machines,” he said.

Huffman said he realizes he’s probably never going to make it to racing’s big leagues, and he’s fine with that.

“I’m too old to have any team interested in picking me up,” he said, “and the series is too expensive for someone like me, with a wife and family and a job, to run full time.

“Still, I enjoy working on the cars and learning everything I can about them. It would be nice to maybe get involved as a crew on one of the other, better funded teams.”

So he races within his limits.

That means that he began the Portland race at the end of the field and held his position for as long as he could.

“I’m getting so that I kind of like road course racing,” he said. “I didn’t at first, but it’s growing on me.”

The brakes went out first, so he had to use the gearbox and engine more and more to keep the car under control, and began slowing for the chicane on the front straight about where other competitors were still hard on the throttle.

“But then the clutch went out,” he said, ending his race after 28 of the 63 scheduled laps.

“At this level, we just run stuff until it breaks,” he said. “And it broke.”

Is a new NASCAR track in the works for Jackson, Mississippi?