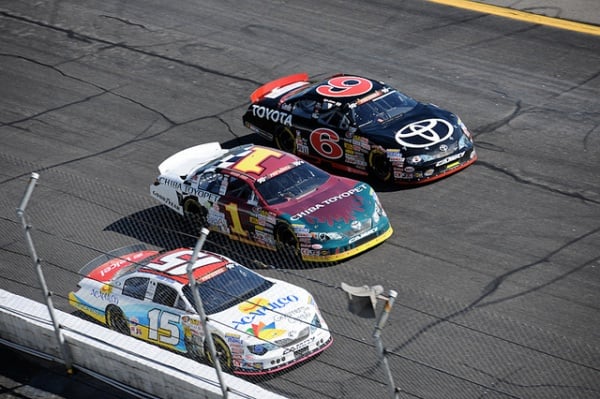 ROCKINGHAM, N.C. – The 2012 NASCAR K&N Pro Series East championship came down to the last lap of the season and when the smoke cleared at Rockingham Speedway, rookie Kyle Larson won his first NASCAR title.

Tyler Reddick, 16, earned a victory in the Classic 3 Championship presented by RCR Racing Museum in a wild finish.

Reddick, who was making his series debut, got a run on race leader – and championship contender – Brett Moffitt coming out of Turn 2 toward the checkered flag. Moffitt came up on Reddick, made contact, and went spinning onto the grass. Reddick then came around in the No. 98 Broken Bow Records Dodge to take the yellow and checkered flags.

A sixth-place finish by Larson in the No. 6 Toyota Racing Development Toyota was enough to give him the title by 15 points over Corey LaJoie. It marks the first NASCAR touring championship for Rev Racing and NASCAR’s Drive for Diversity initiative.

The 20-year-old Larson, from Elk Grove, Calif., also won the series’ Sunoco Rookie of the Year, joining only Joey Logano and Ryan Truex in the 26-year history of the series to accomplish that feat of earning the championship in their rookie years.

Larson had a pair of victories, recorded a series-high 12 top-10 finishes, led all drivers in laps completed and was running at the end of every event during the 14-race slate.

“I’ve been lucky a lot this year … and just stayed consistent and got the championship,” Larson said.  “It feels great.  I have to thank the whole Rev Racing team, Toyota and everyone that helps out on this team, and the NASCAR diversity program for giving me this opportunity to run.”

Moffitt, who was in position to clinch the title if he would have held on the final lap for the win, finished the race 21st and third in the standings, 24 points back.

As the field took the white flag, Moffitt was in the lead with Larson running seventh. Had they finished the final lap in those same positions, both would have been tied in points, with the tiebreaker being total season wins. It would have been Moffitt’s third victory of the season to two for Larson, which would have elevated Moffitt to the title.

Following Reddick and LaJoie across the line were Darrell Wallace Jr., Coleman Pressley and Jesse Little in the top five. The remainder of the top 10 in the series’ inaugural event at the Rockingham mile were Larson, Ryan Gifford, Sergio Peña, Ben Kennedy and Eddie MacDonald.

Four of the top eight finishers on Saturday were either current (Larson and Gifford) or former (Wallace and Peña) members of Drive for Diversity. Another Rev Racing driver, Bryan Ortiz, finished fifth in the season’s final standings and second to teammate Larson in rookie points.

With his victory Reddick – from Corning, Calif. – earned a secured starting position in the inaugural UNOH Battle at the Beach on the short track at Daytona International Speedway in February 2013. He became the first driver to win in his K&N Pro Series East debut since Nelson Piquet Jr. did the same in the season-opener at Bristol (Tenn.) Motor Speedway, and the first to accomplish the feat in the series in what was his NASCAR stock car racing debut since Wallace won the 2010 opener at Greenville (S.C.) Pickens Speedway.

“It’s a shame me and the 11 [Moffitt] got together,” Reddick said of the last-lap incident. “I had a really good run coming off Turn 4 and got alongside him going into Turns 1 & 2. I don’t know what happened but he should have known I was going to be outside of him.

“He kind of ran me up the race track and I wasn’t going to give it to him. Neither one of us would have given it up – it was for the win – so tough deal. Real hard racing though.”

For Moffitt it was another disappointing finish to a championship chase. In contention for the title a year ago he cut a tire while leading with four laps left at Dover (Del.) International Speedway. On Saturday he finished half a mile short of wearing the crown.

He [Reddick] got a good run and got outside of me,” Moffitt said. “Coming of [Turn] 2 I was sliding and I guess I just didn’t give enough room and he was just there enough to hook my right rear quarter panel and hook us into the fence.”

The 2012 season concluded with just four cautions for 12 circuits in the 100-lap event, which featured three lead changes among four drivers. Wallace led a race-high 51 laps while Little, Moffitt and Reddick also paced the field after Friday’s pole winner CJ Faison led from the starting grid.

Larson will be crowned the 2012 NASCAR K&N Pro Series East champion at the NASCAR Touring Awards on Dec. 8 at in the Crown Ballroom of the Charlotte (N.C.) Convention Center at the NASCAR Hall of Fame.

NEXT POST
NASCAR NATIONWIDE: Wallace And Harr Ready For Phoenix With JD Motorsports