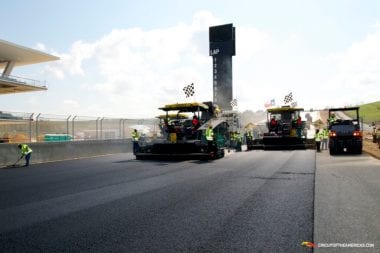 Circuit of The Americas hits another major milestone in its construction process with the completion of the third and final layer of pavement around the 3.4-mile course!

The “wearing course” or third layer of asphalt is one of the most unique surfaces in the world. Built with materials from all over Texas, it will allow Formula 1TM racecars to perform at its best. The aggregates that form the asphalt ingredients for Circuit of The Americas have been meticulously selected to meet the standards of the Federation Internationale de l’Automobile (FIA). Oscar Rodriguez from Rodriguez Engineering, one of the subcontractors working on the project, explained how the surface at COTA is not an average one. “The overall design of the asphalt mix for the track is crucial to the performance of the car,” said Rodriguez. ”We work with Tilke and asphalt expert, Dr. Reynard Hart, to produce a mix that is up to their specifications”.

Dr. Hart who works closely with Tilke as a consultant, has paved most of the F1 circuits around the world and his knowledge and expertise was crucial to the overall success of this project. The last minutes of the paving process were crucial and Hart was actively involved with Austin Commercial technicians to make sure the surface was even and the joints of pavement on top of Turn 1 were up to the highest standard.

Tilke engineers Oliver Liedgens and Frank Both were supervising the paving process. After completion, both were smiling from ear to ear. “When we came to Austin a little over 2 years ago, we came to the site for the first time and all we saw was mud and trees,”Liedgens and Both said.“It was really hard to imagine that a track would sit on this piece of land and the only source of imagery that we had was a couple of renders. Today is the first time we get to see the final product and this makes us very happy.”

Over the next few weeks, the track surface will be cautiously guarded to allow a proper settlement of the asphalt. Progress continues moving forward at Circuit of The Americas as race day approaches.

Stay tuned for more construction updates from the COTA team!

Written By: Circuit of The Americas

Clint Bowyer has completed the collage of pictures after Martinsville win

NEXT POST
F1: Hamilton Rumored To Replace Schumacher At Mercedes