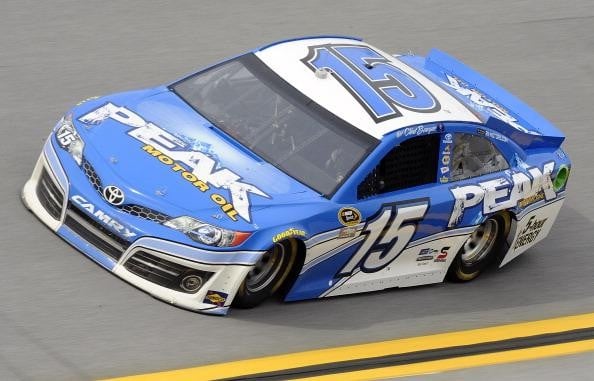 TALLADEGA, Ala. — Kasey Kahne was running third among the four cars on the track Wednesday at Talladega Superspeedway when Jeff Burton pulled up behind him. The trailing vehicle didn’t give the one in front a shove — in fact, the two didn’t even touch. But it was still enough for the Hendrick Motorsports driver to pull out of line and sail straight into the lead.

“Didn’t touch me, just came up behind me,” Kahne described. “There were four cars on the track, and I went from third to the lead. You don’t even want to get out of line right now with the car at times, because you’ll get fright-trained. They’ll go by you. You can’t get that type of run. I think if you can feel it today with not near as many cars, you’ll definitely feel it when the speeds pick up and you have that many more race cars on the track.”

And that, in essence, was why both drivers and NASCAR officials left the big restrictor-plate venue so excited about what next season’s Daytona 500 might hold. Wednesday marked the third time that 2013 model Sprint Cup cars have been on the race track, but the debut for those vehicles in the draft, and the consensus at the end of the six-hour test was that drivers might have a little more control over their own destinies than they currently enjoy at Daytona and Talladega.

“We’ll look at what it’s going to take for plate size and some other things, but the main concern is how the cars draft, how they react in the draft, and obviously to get it more one-on-one racing and get it away from the tandem drafting we saw a few years ago at Daytona,” said Robin Pemberton, NASCAR’s vice president for competition. “All the input that we have from drivers and teams so far is pretty good.”

Seven drivers representing three manufacturers participated in Wednesday’s test, which followed an initial shakedown of 2013 cars last November in Homestead, and a Goodyear session in August where the principal goal was removing weight from the vehicle to improve tire wear. NASCAR asked the drivers involved Wednesday to attempt two-car drafting, and Ricky Stenhouse Jr. said those pairs eventually stalled out and were caught by individual cars. Drivers seemed most happy by the fact that they could get a better run on their own in the draft, something they can’t often do in the current cars.

“It does afford the third-place guy to have some options,” said Sprint Cup director John Darby. “He can pull out and move forward rather than getting shot to the back.”

Manufacturers in NASCAR’s top series are redesigning their cars for next season to give them more brand identity, following the lead of the popular and very carmaker-specific entries now used on the Nationwide circuit. Teams received permission this summer to begin building the parts and pieces which will debut at the Daytona 500 on Feb. 24. Wednesday there seemed clear differences between the next-generation vehicle and the one currently being utilized, distinctions that went beyond identifiable front grilles and character lines.

“The way the front windshield is slanted a little different, it has more angle in it and is laid back some,” said Stenhouse, who will race Jack Roush’s No. 17 on the Sprint Cup tour next year. “The car does feel longer. It seems like it is a little bit wider. I have no idea what the dimensions are compared to the one we have now, but it just feels like that. … There are a few more blind spots in different areas. These are things we will have to get used to. Any time you change up something, it is different at first and you might not like it, but you adapt to it and get the feel for it. That is another reason I think it was nice being here today.”

Kahne said he topped out just above 204 mph in the draft, and recorded a fastest average lap of 198 mph. Given that the front ends of the 2013 cars don’t match up with the rear bumpers as well as on the current vehicles, the Hendrick driver said the vehicles moved around a lot more in the draft — and that was with just seven cars on the track. With 43? “It will cause some problems out there at times, I’d say,” he said.

“I feel like this is going to create a lot more excitement — good for some, bad for others,” Kahne added. “It’s going to be way easier to wreck with this car. Not in a bad way. If you get screwed up, if one car darts in front of you, if you’re pushing the wrong corner of the car, there’s going to be a wreck. I’d say the way it is now, this car is much dicier and moves around a lot more than the other car, and that creates great racing.”

Still, drivers seemed pleased with the runs they were able to generate on their own, which stands in contrast to the help they need to move through traffic today in restrictor-plate races — such as Sunday’s Sprint Cup event on the same 2.66-mile Talladega track. Wednesday NASCAR employed the same plate-opening width it plans to use this weekend, placing most of its focus on how the vehicles behaved in the draft. Although 2013 cars will be on the track again Tuesday and Wednesday of next week in a Goodyear test at Texas, Wednesday’s session is the lone scheduled test on a plate track before next year’s Preseason Thunder at Daytona, which precedes Speedweeks.

That means the results of the Talladega test may be a large building block in the rules package for the 2013 Daytona 500. “It’s real big,” said Darby, sitting next to Pemberton. “I don’t want to speak for Robin, but I think both of us feel a whole lot better leaving here form this test than we did a year ago going forward.”

A year ago, NASCAR came to Talladega trying to root out tandem drafting in preparation for this season’s Daytona 500. Those involved in Wednesday’s test left Talladega considerably more optimistic than they did then.

“NASCAR’s working really hard to make them drive better, to make the races more exciting,” Kahne said. “We had five or six of us out there, and it was actually pretty dicey and pretty exciting, and with the car we have now it’s not quite like that. So I think we’re making improvements. We’re definitely going in the right direction. That’s great from a driver standpoint, because we’re going to be able to race and pass more, and that’s awesome from a fan’s standpoint, because they’re going to get a better show.”