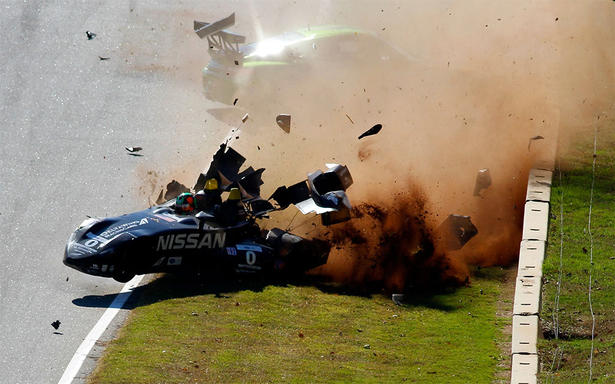 Gunnar Jeannette was passing a slower Porsche during a practice session at Road Atlanta. While side-by-side the Porsche slid off the corner colliding with the DeltaWing and sending the car on it’s side. Helmet scrapping against the ground, as seen in the video, Jeannette was transported to the hospital where everything later checked out ok.

Jeannette commented, “Not the best of practice sessions, unfortunately. I followed a GTC car through [turns] 10a and 10b, and in following the car I fully expected that he saw me. I had a run on him exiting 10b before the bridge and pulled almost completely past. He cut over to take the apex and made heavy contact with the left-rear of our car that sent me for a bit of a ride.”

LeSaffre said, “I had no place to go,” he said. “I was tracking out on the curb. My steering wheel was straight, and he whacked me. There is quite a bit of traffic and a lot of turns where you should not pass even if you’re in a P1 car. It comes down to being patient.”

Highcroft Racing spokesman stated that the “car was repairable and will be on track tomorrow”; first practice takes place at 10:15 AM (EST).

The DeltaWing is racing “unclassified” for their first American competition in the “dart-like” car for the 15th annual 1,000 miles or 10 hour Petit Le Mans race.