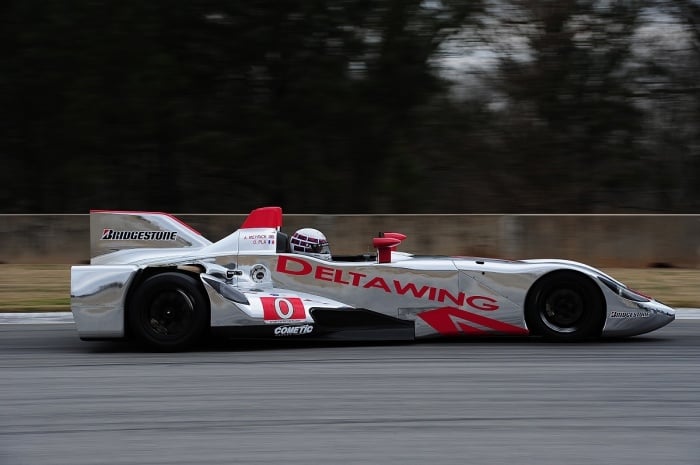 DeltaWing Racing Cars has revealed the livery for the DeltaWing powered by Elan.

After running a fully black livery with some yellow, then red trim on the roll hoop accents in 2012, the 2013 DeltaWing livery marks a radical departure. The DeltaWing will take the grid in 2013 with a striking chrome paint scheme, now highlighted with red accents on the roll hoop and just behind the front tires, from new tire partner Bridgestone.

The chrome is a natural evolution for the car that has made its mark on the sports car racing world simply by being different. It’s the latest new element for the DeltaWing’s 2013 season.

“It just ties into the DeltaWing being such a unique, revolutionary car,” said Don Panoz, managing partner, DeltaWing Racing Cars. “I wanted something that represented that image. A shining, aggressive metal was what I thought of, and that was the chrome.”

The design went through several possible design ideas before settling on the chrome and red.

“I think this became apparent once we would be using Bridgestone tires,” said Panoz. “The only color they have outside of black is red. We wanted to keep it consistent. Before deciding on the chrome, I looked at brilliant reds or brilliant greens. We decided the chrome was the thing to keep it in line with Bridgestone and their colors.”

This is not the first time a Panoz race car has had this type color. The Panoz Esperante GTR-1 that raced in the late 1990s had a primarily silver background, as did the LMP1 Panoz Roadster-S run that premiered in 1999.

The DeltaWing is scheduled to test this Wednesday and Thursday at Road Atlanta in preparation for the Mobil 1 Twelve Hours of Sebring Fueled by Fresh from Florida, the opening round of the 2013 American Le Mans Series season. Olivier Pla and Andy Meyrick have been confirmed as drivers for the LMP1 class entry, with Meyrick set to turn his first laps in the car this week.

NEXT POST
ENDURANCE: United SportsCar Racing To Debut In 2014