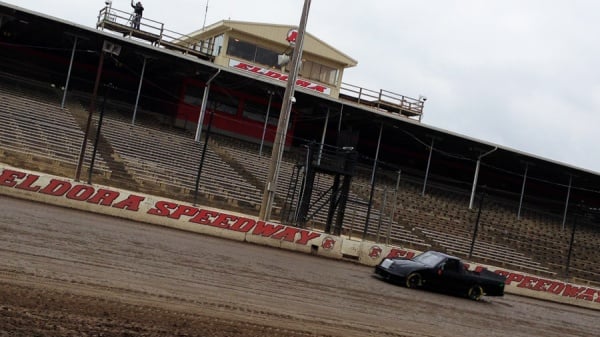 Below you will see photos and a video from a NASCAR Truck Series test held at Eldora Speedway with Tony Stewart circling the speedway owned by the man himself. The NASCAR dirt race race is just a few months away and already has the short track community overwhelmed with excitement.

Eldora Speedway and NASCAR announced Wednesday another milestone event in the legendary half-mile oval’s rich history as the 60-year-old track will play host to the NASCAR Camping World Truck Series in 2013. The Inaugural Mudsummer Classic on Wednesday, July 24 will mark the first NASCAR-sanctioned National Tour event held on dirt since September 1970 in Raleigh, N.C.

“Eldora typically hosts 10 different touring series each year, and we’re very proud to have NASCAR join the list of series that will compete at our track,” said Tony Stewart, the three-time NASCAR Sprint Cup Series champion and owner of Eldora Speedway. “NASCAR’s history began in the sands of Daytona and on the dirt of the Carolinas, and having the NASCAR Camping World Truck Series on the dirt at Eldora brings that history back to a new generation of fans, as well as Eldora’s own fan base.

“The same fans who come to watch a dirt Late Model, a World of Outlaws Sprint Car or USAC Midget might not be the same fan who takes in a NASCAR race. But by bringing NASCAR to their world, at one of the most well-known dirt tracks in the country, will make the Inaugural Mudsummer Classic a must-see for fans of dirt-track racing and NASCAR.”

Since its opening in 1954, Eldora Speedway has proved to be the frontrunner in motorsports growth and stability. The first USAC National Sprint Car Series event held at the facility took place on April 22, 1962, and was won by Stan Bowman. In 1978, the World of Outlaws Sprint Car Series brought the thrill of winged Sprint Car racing to Eldora Speedway, with Bobby Allen winning the first-ever event on April 16, 1978. In the Late Model ranks, the first annual World 100 was won by Bruce Gould in 1971.

Eldora shocked the Sprint Car fraternity with the $50,000 to win Kings Royal that made its debut on July 28, 1984 with a win collected by Steve Kinser. The presence of Late Model racing was bolstered with the creation of the Dirt Late Model Dream and its $100,000 top prize, a revered amount first won by Freddy Smith on June 11, 1994.

The new millennium brought forth the highest paying race in the history of short track racing and The Eldora Million on June 9, 2001. Late Model driver Donnie Moran became the only grassroots driver to ever earn $1,000,000 in a single race.

In 2005, Stewart and the Eldora Speedway staff announced they would begin a new tradition, one that would bring mainstream interest into the heart of short-track racing. Featuring some of the biggest names from NASCAR, NHRA, INDYCAR, the World of Outlaws Sprint Car Series and extreme sports, the annual Prelude To The Dream saw some of the largest crowds in the track’s history and raised more than $4 million for charity.

With that event on hiatus for 2013 to allow for an expanded 19th annual Dirt Late Model Dream that will now encompass three days of racing, the Inaugural Mudsummer Classic featuring the stars of the NASCAR Camping World Truck Series will write yet another chapter in Eldora’s impressive history.

NASCAR has had a little known representation at Eldora since the early 1970s in the form of concrete footprints from the late Bill France, Sr., acquired by Eldora Speedway founder Earl Baltes just days before a Daytona 500. The brazen idea to acknowledge France came from Baltes’ admiration of France and his commitment to auto racing.

“Bill France was a real special man,” reflects Baltes, who sold his beloved track to Stewart in November 2004. “NASCAR was big at the time, still is and I thought having a small remembrance of it at Eldora was neat, but this is even better. I guess I never thought I would see the day that NASCAR and the vision created by Bill France, Sr. would ever be here.”

Ticket holders to the 2012 Feed The Children Prelude to the Dream will be given the opportunity to purchase the same seats they had for this year’s Prelude to the historic running of NASCAR’s return to dirt while also retaining renewal rights to the next scheduled Prelude To The Dream. Notices will begin going out immediately with a deadline of Wednesday, January 2, 2013.

Complete ticket and campsite information for the Inaugural Mudsummer Classic and other Eldora Speedway major events can be found at the track’s website www.EldoraSpeedway.com, or by calling the ticket office (937) 338-3815 during normal business hours.