F1: The Current List Of Formula One Free Agents 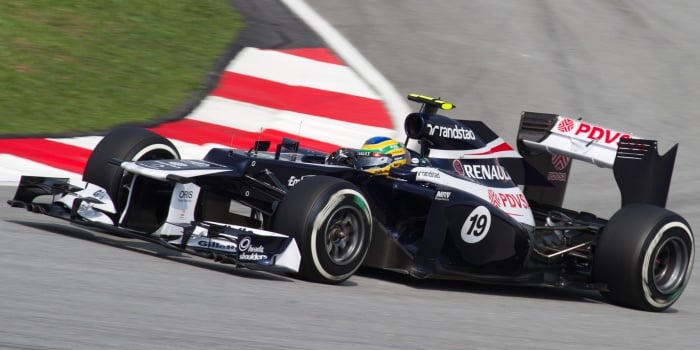 Pre-season testing is approaching rapidly, but there are still seats waiting to be filled at Force India, Marussia and Caterham. We cast an eye over just some of the drivers currently without a seat who could yet be on the 2013 Formula One grid…

Bruno Senna
Since arriving on the Formula One scene at the beginning of 2010, Bruno Senna has driven for three different teams (HRT, Renault and Williams), amassing 46 starts and 33 points. Despite finishing in the top ten more regularly than team mate Pastor Maldonado in 2012, the Brazilian lost his seat at Williams to Finnish rookie Valtteri Bottas. Nevertheless, Senna remains a consistent performer more than capable of scoring points in the right machinery.

Vitaly Petrov
Petrov performed admirably against more experienced team mate Kovalainen in 2012 and played a key role in securing Caterham’s tenth place in the constructors’ standings with his 12th place in Brazil. Where he once proved susceptible to lapses of concentration, the Russian has now emerged as a capable topflight racer, deserving of Formula One status.

Jules Bianchi
The Frenchman’s stellar junior racing career – which included wins in GP2 and Formula Renault 3.5, as well as an F3 Euro Series championship – brought him to the attention of Ferrari, who signed him to their Driver Academy. And in his role as Force India reserve he took part in nine Friday practice sessions in 2012, performing well despite the difficulties of limited seat time.

Jaime Alguersuari
Alguersuari may still be only 22 years old, but he already has two-and-a-half seasons of Formula One racing under his belt. At such a tender age it’s unlikely we’ve seen the best of the Spaniard and his performances at former team Toro Rosso certainly seemed to suggest he was improving all the time. Despite his myriad interests outside F1 racing, Alguersuari remains committed to getting back on the grid.

Adrian Sutil
Out of Formula One racing since losing his seat at Force India to Nico Hulkenberg at the end of 2011, the German was spotted in the paddock at numerous races last season and remains on good terms with his former employers. His points-to-starts ratio is good – 90 starts, 95 points scored – and that could prove attractive to teams.

Heikki Kovalainen
He may have gone some 60 races without scoring a point, but it’s worth remembering that Kovalainen is a Formula One race winner. In three years at Caterham the Finn helped build up the new team to the point where he often mixed it with quicker cars. Despite his performances often going unheralded, he has remained motivated and in excellent physical condition.

Kamui Kobayashi
The former Sauber racer has always been an exciting presence on track, but in 2012 he seemed to smooth off some of the rough edges to produce some of the finest drives of his 60-race F1 career. A maiden podium at his home event in Japan showed that on his day Kobayashi has stunning pace, and whilst an online campaign to raise sponsorship might not be enough to secure a 2013 drive, it does prove his enduring popularity with fans.

Timo Glock
Glock’s recent split from Marussia was greeted with shock by his fellow drivers who rate his abilities as a racer – and appreciate his friendly and easy going nature. The German made it to the F1 podium on three occasions when he was driving for Toyota, but his skills have been harder to recognise over the past three seasons spent in uncompetitive machinery. F1 racing’s loss looks like it could be the DTM’s gain.

Giedo van der Garde
As Caterham test driver, the Dutchman participated in six FP1 sessions and the young driver test in 2012 as he staked a claim for a full-time race seat with the team. The 27 year old was a regular winner in GP2 and first drove an F1 car back in 2007.

Narain Karthikeyan
The well-funded Indian racer spent last season with backmarkers HRT, where he struggled to qualify off the back row. However, he has amassed considerable experience since making his Formula One debut with Jordan in 2005 and in the past has attracted solid backing from sponsors in his homeland.

Luiz Razia
The Brazilian was a star in GP2 in 2012, finishing second in the championship and scoring four wins. He subsequently went on to test for both Toro Rosso and Force India, having previously sampled F1 machinery with Caterham and Marussia. He’s well backed an eager to step up to Formula One competition.

Davide Valsecchi
Valsecchi pipped Razia to the GP2 Series crown in 2012, scoring four wins along the way. The Italian took part in practice for Lotus (now Caterham) at the 2011 Malaysian Grand Prix and recently tested for Lotus at the Abu Dhabi young driver test. Six of the previous GP2 Series champions have subsequently graduated to Formula One racing and Valsecchi will be hoping he’s next.