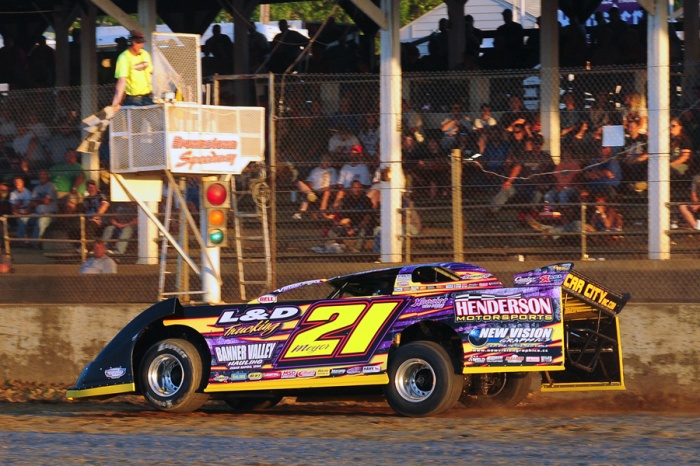 (BATESVILLE, ARKANSAS) Billy Moyer Racing (BMR) recently returned back to their Batesville, Arkansas race shop following a stint in Arizona to kick off their 2013 racing season. Dirt Late Model Hall of Famer Billy Moyer entered eight events at the Central Arizona Raceway in Casa Grande, Arizona and Tucson International Raceway in Tucson, Arizona from January 5-20. In all, the popular driver known as “Mr. Smooth” reached victory lane on one occasion, while racking up four Top Fives and seven Top Tens.

The #21 team celebrated a $3,000 triumph in the fifth leg of the ‘Winter Extreme’ mini-series in Tucson on Saturday, January 19. Billy, who ran second in his heat race, started from the outside of the front row in the 30-lap feature event and led from green to checkers. When the dust had settled, Billy graced victory lane by besting a talented field including Tim Fuller, R.C. Whitwell, Morgan Bagley, and Justin Kay.

Other top five finishes out west included a third place ‘Wild West Shootout’ performance on January 6 at Casa Grande, as well as second and fourth place efforts at Tucson on January 18 and 20 respectively. You can view a detailed race-by-race recap from the action at both Casa Grande and Tucson by logging ontowww.BillyMoyer.com.

“We had an alright trip to Arizona highlighted obviously by the victory, but it could have been a whole lot better,” quoted Moyer following his return to Arkansas. “I felt like I gave a win away at Casa Grande and then in last Sunday’s $10,000 to win finale at Tucson, we were going to probably finish second before an ignition wire failed on the last lap. We definitely got our car better the longer we were out there, so that has me looking forward to the rest of the year.”

It is unclear at this time when the BMR team will take to the track next. According to Billy, a trip to Georgia and Florida for “Speedweeks” is up in the air and it may not be until March before he goes racing again. Keep checking www.BillyMoyer.com to view the latest schedule plans for the #21 bunch.

The latest dirt on Billy Moyer Racing can be found all year long at www.BillyMoyer.com.

NEXT POST
DIRT LATE MODEL: FASTRAK Considers Splitting Regions in 2014 Because of Growth