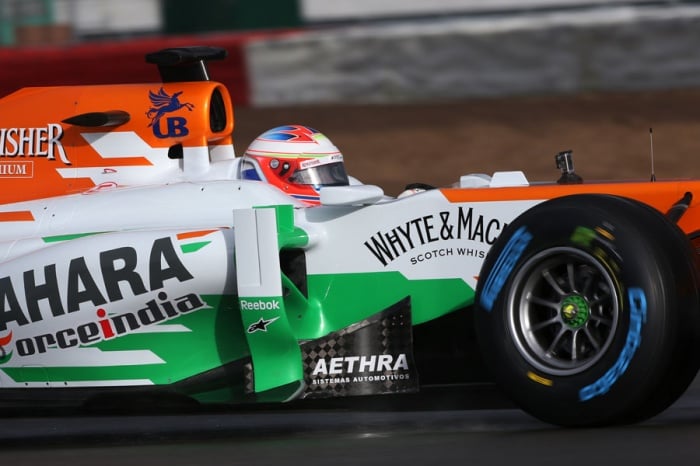 Sahara Force India unveiled its 2013 challenger today as Paul Di Resta pulled the covers off the VJM06 at Silverstone circuit.

The VJM06 is the third car to be overseen by Technical Director, Andrew Green, and builds on the strengths of the 2012 car. With stable technical rules the car is more evolution than revolution with the removal of the ‘step’ nose being the most obvious visual change.

“The VJM06 doesn’t look massively different to its predecessor, but beneath the skin we’ve looked at every detail to try and find more performance,” says Team Principal, Dr Vijay Mallya. “I’ve followed the development of the car closely and I’m proud of what we have achieved. The objective now is to make sure we build on the promise of last year and have a strong start to the season.”

Summing up the approach to the design of the VJM06, Andrew Green said: “It’s a brand new car from the ground-up – everything is new. We discussed carrying over big chunks of last year’s car, including the chassis, but decided not to. There were still some gains to be had with the chassis, so we elected to take the performance benefits. The biggest change that everybody is going to notice this year is the fairing on top of the nose to hide the ‘step’. It’s neutral as far as the car’s performance is concerned but tidies up the flow over the top of the chassis.”

Chief Operating Officer, Otmar Szafnauer, praised the team’s efforts over the winter to develop the VJM06: “We’re very optimistic. We’ve been working hard over the winter, trying to make improvements where we know we can find performance. Everything has come together very nicely. We’ve also focussed on operational strength by bolstering our simulator programme and increasing our CFD capacity with new hardware.”

Paul Di Resta, half of the team’s 2013 line-up, was delighted to see his new car: “Seeing the car built and complete for the first time is a special feeling. I’ve followed its progress in the tunnel and it looks very impressive – aggressive and fast. Now I’m just eager to get out there and see where we stand compared to our competitors. After the winter I feel refreshed and keen to get back to business.”

The Sahara Force India cars will be powered by Mercedes engines with the gearbox supplied by McLaren Applied Technologies for a fifth season. This will be the third season with the Mercedes KERS.