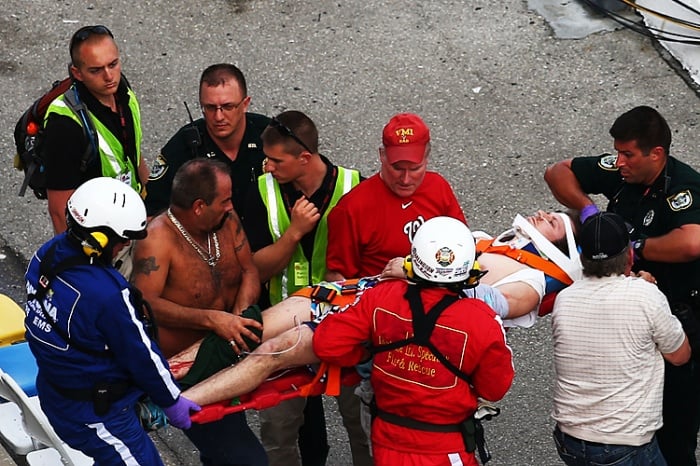 Three Daytona fans injured by the wreck at Daytona International Speedway have contracted with the personal injury law firm of Morgan and Morgan, and four more have made appointments, firm founder John Morgan said Monday. Morgan said of the three under contract, one has a broken leg and another has a head injury. He was checking with his firm on the third person’s injuries.

None of the injuries of those seeking legal help with the firm were life-threatening, he said. A Speedway attorney said he would not comment on possible litigation. The potential legal fight to come will involve the “assumption of risk” when someone attends a sporting event, whether it’s a race at the Speedway or a basketball game with players driving toward the hoop, said Morgan of Ponce Inlet, whose firm has offices in four states. “When you go to a sporting event, if you are underneath the basket that’s where your seat is and Shaquille O’Neal comes after a loose ball and dislocates your shoulder, you sat there knowing that was a risk,” Morgan said.

But Morgan said in the case of the Speedway fans, they expected the fence to keep them safe when Kyle Larson’s car slammed into the wall near the finish line of the NASCAR Nationwide Series DRIVE4COPD 300 on Saturday. The car broke apart, spraying a car tire and debris through a 22-foot grandstand fence into the crowd. At least 28 fans were injured.

Kyle Busch is planning a retirement from Xfinity Series racing