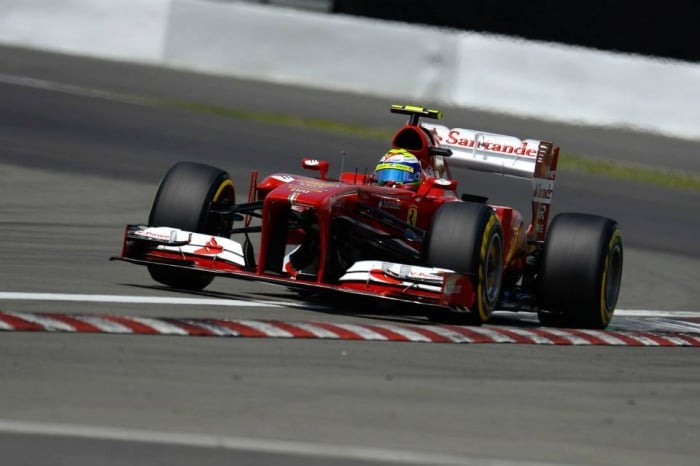 Alonso sums up the first part of the season. See German Grand Prix photos below.

Maranello, 11 July – Fernando Alonso loves speed more than anything, so he didn’t need much persuading to turn taxi driver at the old Nurburgring circuit prior to the race, see German Grand Prix photos below. Here you can find part of an interview he gave to RTL’s Jan Krebs, inside the cockpit of an F12 as they lapped the famous Nordschleife.

Designed to test even the best cars to the very limit, so that manufacturers are keen to use it to evalaute their new models, its inherent dangers mean it is no longer used for Formula 1 and so this was the first time Fernando had ever driven a Ferrari at this track. Naturally, part of the interview looked at the way the season has gone so far.

How would you assess Ferrari’s performance and your own this year?

“I see it looking good and I think we can give it an 8, a good score. We are definitely not the quickest car, however, it is a very complete car, so I am pleased with it I would say. As for myself, it’s not for me to give a number. I’ve definitely improved a lot since the early years, let’s say we are more complete, but there is always room for improvement race by race with experience, with everything.”

How do you get over a race that hasn’t gone well?

“Certainly, it’s never easy to forget a bad race. Yes, I think about it, but in the end, you know it’s your job and there are more important things in life and then, when a race goes badly, you need to already be thinking about the next one and not the past.”

What does second place mean to you?

“Well, sometimes a great satisfaction and sometimes a great disappointment. Second place can give you very different feelings. No two second places are ever the same. It depends on the circumstances of the race and who is first. If it’s your main rival then it’s a sad place, but if not, it’s a good one.”

Have you ever been scared in a Formula 1 car?

“Yes I’ve been scared, sometimes. Definitely races in the wet when you lose all visibility. It’s a critical moment. And then at times like we have seen recently with the tyres that did not hold, you get a respect for the speed and a sense of danger.”

Can you explain what happens when a tyre explodes?

“When a tyre explodes the first thing you feel is that the steering wheel starts to vibrate and at the back the car begins to vibrate and you feel the rear of the car is very light and you have to apply opposite lock. That’s what I have felt and I could see from what the others experienced all the blow-ups were very similar. If it happened halfway through a fast corner, I think it would be impossible to control because you don’t have the time to react, as was the case unfortunately with Felipe: it happened halfway through a corner and he lost control. If it happens on the straight, then you have a slight chance of catching the car. Certainly, it’s a shock, a moment that is completely unexpected and you are never ready to control it. Then you talk to the team on the radio and try to get back to the pits as quickly as possible, because if you are in the middle of a race you need to make up for lost time.”

Where do you get your inner strength, your energy and your ability to revitalise yourself and to relax?

“I definitely get it from my family which is one of the things which the Samurai philosophy is based on. They say you have to live with an aim in mind and that aim is the family, the clan.”

What is fitness for you? Is there such a thing as a day without sport?

“Few, very few, even if sometimes I can spend a couple of days watching television on the sofa. Even when it’s not for my race preparation, I always try and do some sport because it’s my passion and I like a lot of different sports, especially football.”

And speed, what does that mean for you?

“Everything. Without speed it would be hard to understand a single day. I like speed, I like doing everything in a hurry.”