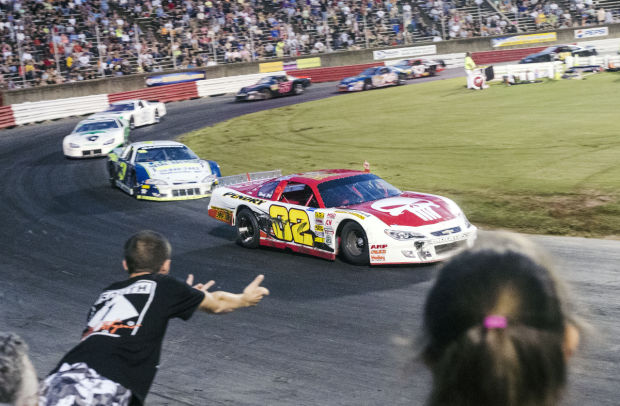 Sportsman driver Mike Robertson was dragged by the car of Derek Stoltz at Bowman Gray Stadium. The driver was upset after getting put into the wall and went to comfort Stoltz. Robertson then grabbed onto the door and Stoltz took off and dragged the driver until he could shake him off. See the video below.

Because the division never ends a race on a caution, this one lasted 121 laps and included a short rain delay with two laps to go. Myers hung tough through it all and won for the 13th time in his career, holding off Danny Bohn, Jonathan Brown and Junior Miller, the 62-year-old track legend who showed he has a little something left in his tank.

“I was just thinking either rain or don’t rain, but I knew that we had the fastest car tonight,” Myers said of the short delay, when the cars moved into the pits for a few minutes as workers dried the track. “In these 100-lappers, it’s about staying patient and getting the jump early, and that’s what we did.”

Myers had the fastest car in qualifying, but the lineup was determined by a blind draw. And for the first time, Myers’ wife, Jenny, made the pick. It worked out because Myers drew the front row next to Randy Butner.

“I think she might do it again because that was a great draw for us,” Myers said. “She was a little skeptical at first, but she did a great job. I just told her to draw a good number, and I’ll do the rest.”

There were seven cautions and double-file restarts after each, but each time Myers got the jump and stayed in front.

For a while, Tim Brown and Joseph “Bobo” Brown were hounding Myers. But they eventually had mechanical problems and were forced out of the race.

“The key over here is being on the inside,” Myers said. “You just have to have that grip, and this car was perfect. We’ve won a couple of 25-lappers, but this is nice to show that we had the fastest car.”

Jason’s brother Burt, the Bowman Gray Stadium Modified points’ leader, finished fifth. He did some excellent driving, moving up after drawing the 17th starting position, and still leads the standings by 30 points, ahead of his younger brother.

“You are just trying to survive a night like this,” Burt Myers said. “We were a little discouraged with qualifying, and then we got a bad draw, but Tim (Brown) and Jason were up front. But for me to finish fifth and for Jason to win, in the grand scheme of things it was a good night.”

Tim Brown, the defending division champion and a nine-time season champ, had his mechanical problems on lap 99 and wound up 16th.

“With double points, it killed us,” Brown said. “Some years we have it and other years we don’t, so we have to look to next year. I’ll come and try to win races, but they’ve buried us in the points. You win some and you lose some, so those are the breaks.”

Sitting in his trailer trying to cool off afterward was Miller, who was pleased with his best finish of his Bowman Gray Stadium season.

“We had a decent run, but with about 30 laps to go at Bowman Gray Stadium we had a left burnout, and then we were out to lunch,” said Miller, who has 71 career wins at the stadium. “But we hung in there and had a good finish. If we can get this racecar a little better we can be right there.

“It’s good to run up front again and shake ’em up.”

Bohn had another second-place finish but said his car was very good at Bowman Gray Stadium.

“We had a good car, but Jason started up there and just stayed in front,” Bohn said. “He got lucky with the starting spot, but he made that work for him.”

In Bowman Gray Stadium Street Stock, veteran John McNeal won a 10-lap race that was scheduled for 20 but shortened because of time. McNeal took the lead on lap seven after leader Billy Gregg and Tommy Zachary got tangled up.

Winning both 20-lap Sportsman races was Derek Stoltz, who won for the fourth and fifth time this season.

“I just went hard,” Stoltz said after his first win.

Stoltz, who started 12th in the second race, was a bull in a china shop as he worked his way to the front.

On the final Bowman Gray Stadium lap, he dumped leader Bryant Robertson in turn three and also bumped Robertson’s brother, Mike, out of the race. After Mike Robertson was taken out in turn two, he ran after Stoltz and latched onto the passenger side of his car and got taken for a ride for about 30 yards.

After Bryant Robertson wrecked, he tried to run after Stoltz but was stopped by security in turn three.

The rain came soon after, and Stoltz was the declared the winner with one lap to go.