See F1 2013 Screenshots and Videos Below 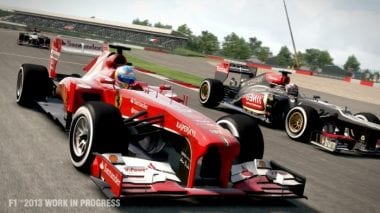 Codemasters® today announced that the F1 2013 Game will launch worldwide this autumn for the Xbox 360® video game and entertainment system from Microsoft®, PLAYSTATION®3 computer entertainment system and Windows PC. This year’s title will feature a new gameplay mode called F1 Classics giving fans the chance to race classic cars on iconic circuits against legendary drivers for the first time in Codemasters’ award-winning series.

To mark the announcement, Codemasters has released a trailer teasing some of the iconic cars that will feature in F1 Classics, showcasing a brief evolution of FORMULA ONE cars through the years to present day. The video is now playing at www.formula1-game.com

Developed by Codemasters as part of an exclusive multi-year deal with Formula One World Championship Limited, the game will be available worldwide in two editions: F1 2013 Game and F1 2013: CLASSIC EDITION.

The F1 2013 Game will feature all the cars, circuits and star drivers from the 2013 season, allowing gamers to race as Lewis Hamilton in his Mercedes and Sergio Perez in the McLaren-Mercedes for the first time, and includes all of the new drivers, updated rules, tyre changes and remodeled handling to authentically reflect the challenge and exhilaration of racing 2013’s stunning roster of FORMULA ONE™ cars. A range of game enhancements, split-screen and online multiplayer, plus new and returning game modes delivers the most complete FORMULA ONE experience in videogame history.

The F1 2013 Game gives FORMULA 1™ fans the chance to compete against legendary drivers in cars from different eras of FORMULA ONE with a range of classic content from the 1980s. F1 Classics, introduced by legendary broadcaster Murray Walker, allows players to race iconic 1980s cars from Williams, Lotus and Ferrari against drivers including Mario Andretti, Nigel Mansell, Emerson Fittipaldi and Gerhard Berger, with more to be announced, on classic circuits Brands Hatch and Jerez. Classic content is also available in a range of other game modes, including split-screen and online multiplayer modes.

The premium F1 2013 Game: CLASSIC EDITION delivers even more classic content with two additional content packs featuring content from the 1990s and additional circuits to be enjoyed in F1 Classics and other game modes. The 1990s pack includes classic cars from both Williams and Ferrari and drivers such as David Coulthard, Jacques Villeneuve, Eddie Irvine and Alain Prost and others.

The two packs included in F1 2013 Game: CLASSIC EDITION will also be available as optional DLC for players of F1 2013 shortly after release.

To further extend players’ FORMULA ONE experience in the game and beyond the box, RaceNet, Codemasters’ free online community hub, is fully integrated with F1 2013. F1 2012 launched with RaceNet in beta mode and has already seen over 36 million races completed by registered members. In F1 2013 RaceNet, which launched in full with GRID 2™, will offer connected players regular in-game challenges, community-wide challenges, visual stats and game progress updates to compare with their friends. Access for players is free via desktop, mobile or via dedicated apps allowing players to stay connected to their F1 2013 experience and their progress in other Codemasters racing games, wherever they are.

F1 2013 and F1 2013: CLASSIC EDITION will be published by Codemasters and distributed by Namco Bandai Games Europe S.A.S in Europe. To get all the latest F1 2013 news straight from the studio, race over to www.facebook.com/formula1game or follow the team on twitter at www.twitter.com/formula1game.