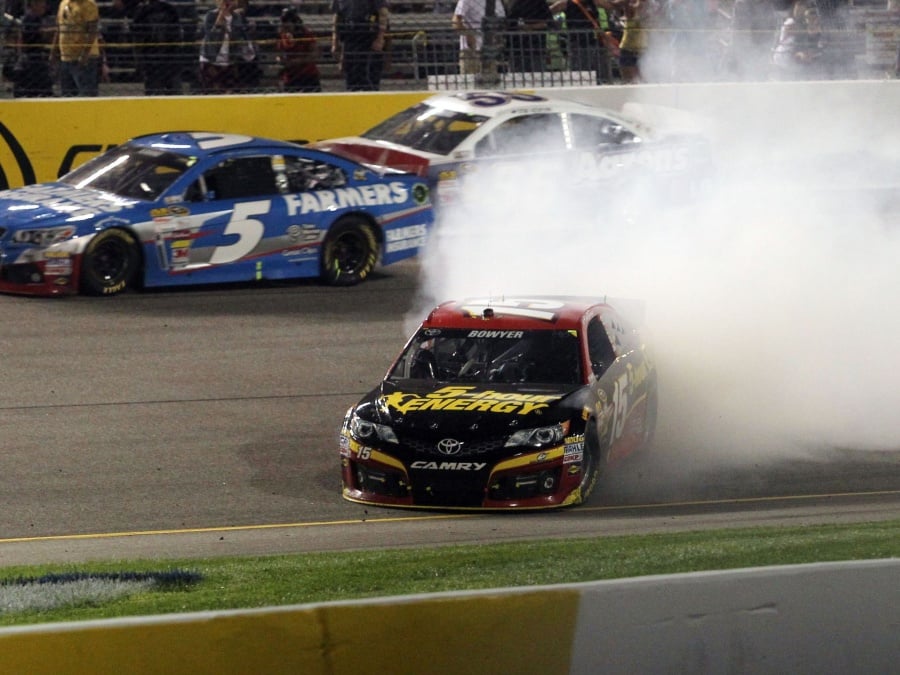 As a result, NASCAR docked all three Michael Waltrip Racing drivers — Clint Bowyer, Brian Vickers and Truex — 50 owner and driver points apiece, implementing the penalty before points were reset for the Chase. The amended standings knock Truex out of the second and final Wild Card position in favor of Newman, who was leading with seven laps remaining at Richmond International Raceway before a series of events involving the MWR teams played a significant role in altering the outcome.

“It is our determination that the Michael Waltrip Racing organization attempted to manipulate the outcome of the race,” said Robin Pemberton, NASCAR’s vice president for competition. “As the sport’s sanctioning body, it is our responsibility to ensure there is a fair and level playing field for all of our competitors and this action today reflects out commitment to that.”

In addition to the points penalties, Michael Waltrip Racing fined $300,000 — what series president Mike Helton called “the most major fine in our history in terms of a dollar amount” — and Ty Norris, the organization’s executive vice president and Vickers’ spotter, was suspended indefinitely. The team’s three crew chiefs, Brian Pattie (Bowyer), Chad Johnston (Truex) and Scott Miller (Vickers), were all placed on probation through Dec. 31.

Waltrip said Monday night in a statement that he would not appeal the ruling. The Chase begins Sunday at Chicagoland Speedway.

“This naturally is a very significant reaction from NASCAR,” Helton said. “As multiple car owners have become a very positive, integral part of this sport, that also comes with the responsibility from NASCAR and also the car owners to maintain a fair and level playing field. We’ve talked about what-ifs over the years, particularly since the Chase was established, particularly with the evolution of multiple-car teams. And we’ve been very fortunate that we’ve not had any occurrences that required NASCAR to step up … as we’ve had to do today.”

Bowyer’s spin with seven laps remaining at Richmond set off a chain of events that directly impacted who qualified for the 12-driver postseason field.

Additionally, Vickers’ unscheduled pit stop in the late going allowed Joey Logano to gain a position, helping him race his way into the top 10 in points. Logano edged Jeff Gordon for the final spot based on the standings, and freed up a Wild Card spot which went to Truex.

At the point of Bowyer’s lazy slide off Turn 4, Newman led the race and was poised to grab one of the two Wild Card berths if he could capitalize for his second victory of the season — which would have denied one-win Truex the opportunity to snag a Wild Card spot. But Bowyer’s spin brought out a deciding final caution, and a sluggish pit stop by Newman’s No. 39 team allowed Carl Edwards to leave pit road first and pull away to the checkered flag on the final restart with three laps remaining.

A review of in-car audio later revealed Bowyer hearing from spotter Brett Griffin that Newman was leading, then comments from crew chief Brian Pattie, saying, “Is your arm starting to hurt? I bet it’s getting hot in there. Itch it.” Half a lap later, Bowyer’s No. 15 Toyota spun to force the final caution period. Bowyer had clinched his berth in the Chase three weeks earlier at Bristol Motor Speedway.

“My car was tight as hell,” Bowyer said after the race when asked about the team radio communications. “(Jimmie Johnson) blew a tire and hit the wall. I’m telling you, I was the next one. That thing slid, what, maybe less than 10 feet and blew out. You know what I mean? Something was going on there. I’ve been doing this a long time. It is what it is. It’s unfortunate. I know it’s a lot of fun for you guys to write a lot of wacky things. Go ahead if you want to, get creative. But don’t look too much into it.”

“Looked a little intentional to me there, bud,” he told crew chief Steve Letarte over the radio. “… He was on the brakes in the middle of the corner trying to spin it out, trying to slow down. He was like stopping, trying to slow it down so he could spin it out without really getting in trouble.”

In the immediate aftermath Saturday night, Helton said, there was nothing in the race that seemed to warrant a reaction from NASCAR. It was early Sunday morning when officials realized something else might have been afoot, and NASCAR began collecting audio and video from ESPN’s coverage as well as timing and scoring data.

NASCAR spent Monday reviewing evidence, and met with MWR executives at the Research and Development Center before levying one of the harsher fines in the sport’s history.

A central character in all this, Bowyer, remains the eighth seed in the Chase despite the 50 points deducted before the standings were reset. That didn’t sit well with Gordon, who was also directly impacted by the late-race actions of the MWR drivers Saturday night.

“The guy who started all this not affected at all?” the four-time champion posted via Twitter.

Helton said the penalty was assessed to the Michael Waltrip Racing team as a whole.

“The reaction by NASCAR is to Michael Waltrip Racing, and to every team in his organization,” he said. “… Cars spin out. We have cautions. There are a lot of things that happen on the race track, people speculate on why it happened or how it happened. Sometimes there is conclusive evidence. More often then not, though, you don’t know exactly what happened. But the collection of evidence from Saturday night led us to a team-wide reaction rather than an individual car.”

Helton said there was no indication that Bowyer’s spin Saturday night was intentional, and that the most damning piece of evidence in NASCAR’s eyes was the radio communication between Norris and Vickers — in which the driver of the No. 55 car seemed surprised at a sudden and unforeseen instruction to pit.

“That was the most clear piece of what we found,” Helton said, “looking through all the detail that led us to make the conclusion.”

In a statement released Monday night, Waltrip said Norris acted alone — notwithstanding the suspect conversations occurring over Bowyer’s radio channel before the No. 15 car went around.

“What occurred on the No. 55 radio at the end of Saturday night’s race in Richmond was a split-second decision made by team spotter Ty Norris to bring the No. 55 to pit lane and help a teammate earn a place in the Chase,” Waltrip said. “We regret the decision and its impact. We apologize to NASCAR, our fellow competitors, partners and fans who were disappointed in our actions. We will learn from this and move on. As general manager, Ty Norris has been an integral part of Michael Waltrip Racing since its founding and has my and (co-owner) Rob Kauffman’s full support.”

The verdict by NASCAR places Newman — who earlier Monday was introduced as the new driver of Richard Childress Racing’s No. 31 car for next season — in the Chase as the 12th seed in his final year with Stewart-Haas Racing.

“We commend the sanctioning body for taking the time to do the necessary due diligence to ensure that the right call was made,” team owner Tony Stewart said.

The ruling did not impact Gordon, who is still left two points short of a playoff berth.

“We react to what occurred,” Helton said when asked about Gordon. “We don’t react to the ripple effect of an occurrence, because I don’t think there’s any way we can reasonably do that.”

As a result, the Chase will open this weekend with Newman — who is in the playoff for the fifth time in his career — and without Truex, who due to the penalty will be left to compete not for the championship, but for 13th place.

“It’s difficult,” Helton said. “It was a tough conversation with Michael Waltrip Racing and its members. It was difficult as a conversation internally, because we all wanted to make sure we made the right steps and did the right things. But we’ll all go to Chicago, we’ll practice, we’ll qualify, we’ll race, and we’ll get through this.”

Michael Waltrip Racing Fined And Kicked Out Of Chase

Ed Bassmaster vists NASCAR race; Claims to get kicked out