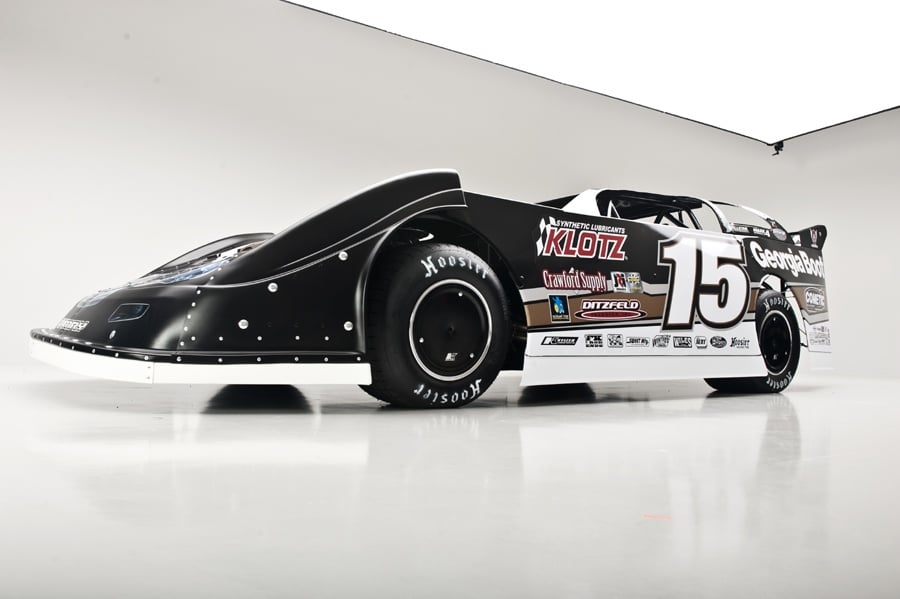 BROWNSTOWN, IN (September 21, 2013) – Steve Francis hospitalized at Brownstown Speedway, cleared to race and returns for 5th while Don O’Neal picked up his fourth career Jackson 100 victory, at the historic Jackson County Fairgrounds bullring. O’Neal took the lead from defending race winner, Jimmy Owens after a lap 68 restart and pulled away from the field for the $15,000 win in the Lucas Oil Late Model Dirt Series-sanctioned event. The 34th Annual Jackson 100 at Brownstown Speedway was also part of the ASi Crown Jewel Cup Presented by DirtonDirt.com.

“I can’t believe it,” said O’Neal, who had missed almost a month of the LOLMDS season after suffering a back injury in August.  “This is my home track; it’s great to win here in front of these fans.  The track was a little rough with the rain, but it was extremely racy.  After that last caution, I don’t know what happened to the 20 car, but once we were out front, it was smooth sailing,” said O’Neal in Lucas Oil Victory Lane for the 33rd time in his career.

“I just took a deep breath on that caution, Jimmy was running a good line there, and it was going to be tough to catch him and pass him.  When the race restarted I just went by him, and then found a fast line.  I have to thank Tader Masters, MasterSbilt Race Cars, Jay Dickens Racing Engines, Optima Batteries, Seubert Calf Ranches, Tarpy Trucking, Superior Cleaning, and Independence Lumber and all of our great product sponsors that make this possible.”

O’Neal now ties Scott Bloomquist as the only 4-time winner of the track’s most prestigious race. The win also marked O’Neal’s 53rd career win at Brownstown, trailing only Jim Curry and John Gill on the track’s all-time win list.

Owens grabbed the lead at the start of the 100-lap main event and held the point until he and O’Neal swapped the lead during laps 16-19.  Once out in front, Owens looked to be on his way to back-to-back Jackson 100 wins until a fateful caution on lap 68.  Owens lost several spots on the restart, dropping back to fifth at one point.  Owens rebounded to finish fourth, just ahead of Francis at the finish line.

Linville had his best ever LOLMDS finish and was extremely pleased with his effort.  “I have to thank Audie Swartz from Swartz Race Cars, Bullock Engines and everybody else for all of their help. To run with Don and to pass the World 100 winner (Blankenship) is just unbelievable.  I just love to come up here and race.  The track crew did a great job with all the rain they have had in the last couple of days.”

Blankenship ran as high as second in the race and had a couple of opportunities to steal the win away from O’Neal, but his main focus was trying to hold off the youngster, Linville.  “He (Linville) drove a heck of race; I don’t know where he came from.  Jimmy looked like the car to beat there for a while.  Once Don got out in front, we were all chasing him.”

Francis amazed the capacity-crowd with a Top-5 finish, after his car nearly flipped during his heat race.  He was taken to the hospital for tests and was then cleared to race.  He took a provisional and started 23rd and came home in fifth.

In preliminary action, John Blankenship set the overall RED BUCK fast time (Group A) amongst the 46 entrants, with a lap of 14.506 seconds. Scott Bloomquist set the fastest time in Group B with a time of 14.549 seconds. Jimmy Owens, Earl Pearson Jr., Don O’Neal, and Dale McDowell won their respective heat races. Greg Johnson and Billy Moyer won their respective B-Mains.

Up next for the Lucas Oil Late Model Dirt Series will be the 10th Annual Lucas Oil Late Model Knoxville Nationals presented by Casey’s General Stores at Knoxville Raceway in Knoxville, IA. The event will take place from Thursday, September 26th through Saturday September 28th, 2013. Both Thursday and Friday Night will feature RED BUCK Time Trials, Heat Races, a D-Main, C-Main, B-Main, and $7,000-to-win 25 lap A-Mains. Saturday will feature a D-Main, C-Main, B-Main, and the $40,000-to-win 100 Lap A-Main to round out the weekend. For more information, log on towww.knoxvilleraceway.com.

For the latest breaking news on the Lucas Oil Late Model Dirt Series, log onto www.lucasdirt.com and follow the series on www.facebook.com/lucasdirt and www.twitter.com/#!/lucasdirt.