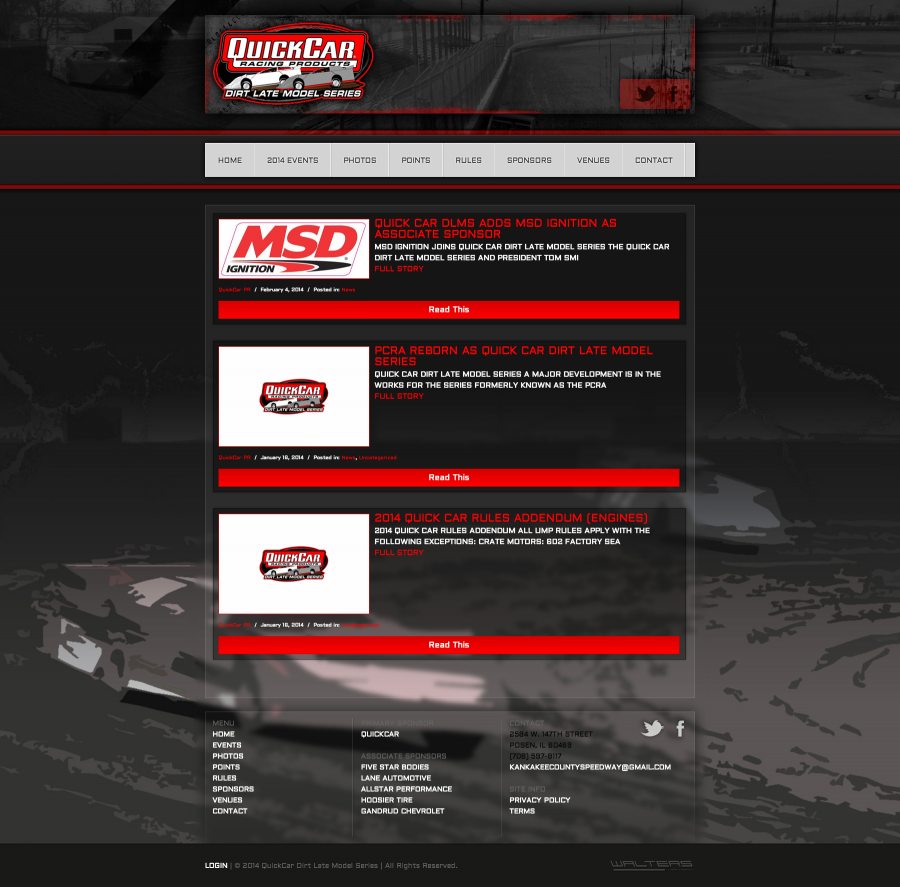 (FEBRUARY 6th, 2014) The QuickCar Dirt Late Model Series website has been released along with a schedule of events for the upcoming 2014 season. The series exchanged both labels and owners during the off season and has also picked up a title sponsor, QuickCar Racing Products. QuickCar will help facilitate marketing efforts in growing the series to the benefit of both it’s drivers and spectators.

The new QuickCar Dirt Late Model Series will debut March 1st on the 1/4 mile Clarksville Speedway in Tennessee in conjunction with the 10th Annual Tuckasee Toilet Bowl Classic. Nine events currently fill the tentative dirt late model series tour but more are in the process of being added. Kankakee County Speedway, the new headquarters of the series, will close out the season on October 3rd.

This is a major development for the series formerly known as the PCRA (Pro Crate Racers of America). The dirt late model series will resume racing action throughout the Midwest under new ownership, direction, as well as a title sponsor. The series will now be known as the Quick Car Dirt Late Model Series with Quick Car Racing Products serving as the new title sponsor.

2012 UMP Promoter of the Year Tom “Smitty” Smith, finalized the purchase of the PCRA series from Deane and Mark Voight in mid-December. The series will move primarily north to it’s new home at Kankakee County Speedway in Kankakee, IL, and a number of new venues have already agreed to host an event for the upcoming 2014 season.

Stay tuned to the QuickCar Dirt Late Model Series website throughout the racing season to receive up to the minute news and race results. The new website will be updated regularly with content. Be sure to visit the photo galleries for any race fans entertainment purposes.

About Walters Web Design
Founded in 2004, Walters Web Design specializes in motorsports website development and graphic design. We use advertising and social marketing to help facilitate visitors and potential customers to all our client websites. “We take pride in all of our customer websites and we want each design to be better than our last. We feel this is what has put us above all the rest in our industry.” Walters Web Design is pleased to partner with the ‘QuickCar Dirt Late Model Series’ for the third year and we look forward to working with them far into the future.