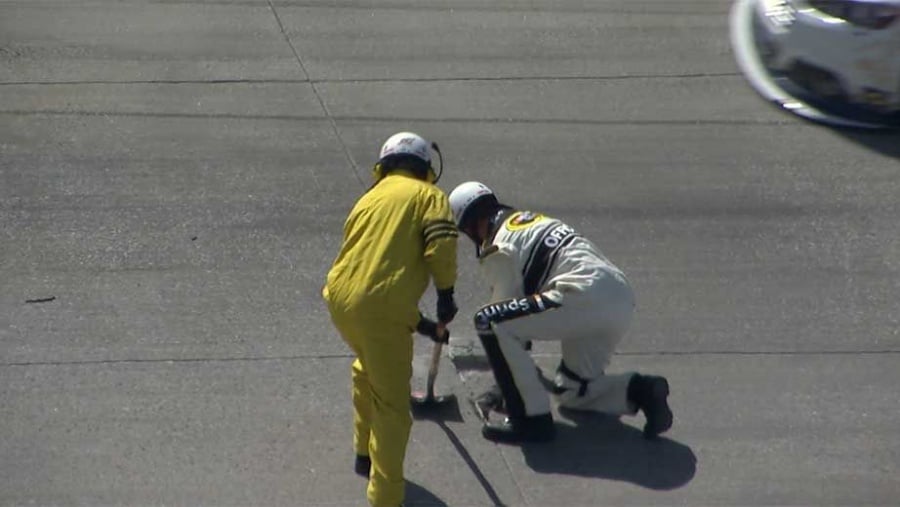 Jamie McMurray collided with the Dover pothole and got into the wall in Turn 2. Track officials came out for track repairs. A sizable piece of the concrete track came loose and necessitated track repairs. At the time of second red flag, Kevin Harvick led the race.A crew was immediately dispatched to repair the Dover pothole which according to photographs from television was fairly large. Sized at approximately six-inches by eight-inches and about two-inches deep. They poured Quik-Rok into the area to fill the area. McMurray’s Chevrolet would require some work also to repair significant damage to its front splitter. Ironically, there was a pothole in Turn 4 of Daytona International Speedway in 2010 — a race won by McMurray.McMurray told his team over the radio that he believed he may have cut a right front tire from a piece of the track.


Drivers noted during the red flag delay that they noticed a problem there prior to Saturday’s Nationwide Series race at the track, but there was no issue then.“It had a black sealer on it so I guess it finally got worn out,” Harvick told the FOX Sports broadcast during the red flag.McMurray and his Chip Ganassi Racing team had other questions as well. Crew chief Keith Rodden suggested the team should get its lap back considering the track caused the car’s problem, but NASCAR was’t swayed.“Ran over the (piece of concrete) and it kind of broke our splitter in half,” Rodden said. Knocked the pan out underneath the car. Hurt the right side a little bit also and then we got into the wall so everyone on this Cessna Chevy SS team is just looking to try to get to work here. Wish we could work on it right now. It’s kind of a tough situation we’re in and a tough situation is NASCAR is in, but we’re ready for this red flag to be lifted.“I don’t know if we’ll get it back to where it was. We finally got our car running really good there and it drove up through a bunch of them. But we’ll do the best job we can and see what we get.”“I thought I blew a tire,” McMurray told Rodden on the team radio during the stoppage. “I braced when I felt it and then didn’t hit the wall, I couldn’t figure out what was going on, that’s why I stopped,” said McMurray, who re-started 24th, one-lap down on the Lap 165 restart.Over his radio, Johnson said, “I saw it this morning on the way to the driver’s meeting. It was already coming up. I was wondering if they’d seen it.”