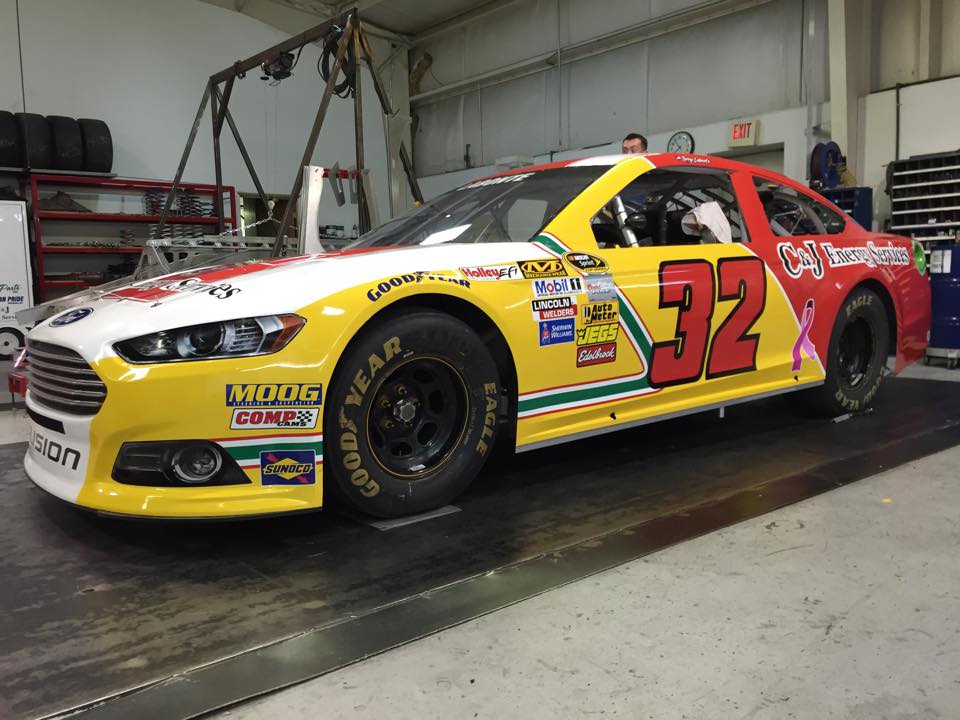 More Terry Labonte tribute car photos below. It’s the car he will run his last race with at Talladega Super Speedway this weekend. However, NASCAR has already said NO to the new two tone paint scheme.

The car was painted in tribute to Terry Labonte. Each side features a different version of cars from the past.

NASCAR has a rule that both sides of the car must be the same color. This prevents confusion for both officials as well as drivers. It also prevents sponsors from promoting two brands on opposite ends of the car.

The team is modifying the car to the red and yellow version on both sides.

TALLADEGA, AL  – Two-time NASCAR Sprint Cup Champion Terry Labonte will be competing in the Geico 500 with C&J Energy Services and the #32 Go FAS Racing team in Talladega on October 19. His start at the Talladega Superspeedway will be the 890th of his 37-year long run and 61st at the famed superspeedway. As a tribute to a legend of the sport, C&J Energy Services and the #32 team created a special paint scheme for Labonte, honoring his remarkable career in stock car racing’s most elite series.

Throughout Labonte’s storied career, beginning in 1978, he has finished in the top ten on 361 occasions; 22 of those finishes ended with a trip to victory lane. Labonte’s very first start in the NASCAR Sprint Cup Series was at the Darlington Raceway with Duck Industries. At the young age of 21, Labonte finished fourth in the #92 car owned by Billy Hagan. A few short years later, in 1984, Labonte went on to win the first of his two championships in the #44 Piedmont car, also owned by Hagan. It was apparent then that Labonte was going to have quite a career in stock car racing and that his cool and calm demeanor masked his passion and drive when behind the wheel.

Following the ’84 championship, Labonte encountered many ups and downs in NASCAR. The sport became more and more competitive with multi-car teams growing and sponsorship needs increasingly demanding. In 1994, Labonte signed with Hendrick Motorsports. This was an incredible turning point in his career, culminating in 1996, when Labonte went on to win his second championship in the #5 Kelloggs Chevrolet. With 12 years between his two championships, the second title was a significant triumph that helped define his career. Many of today’s NASCAR fans and industry leaders still remember and cherish the second championship.

The paint scheme created by C&J Energy and FAS Lane Racing for Labonte at this year’s Geico 500 will include a replication of Labonte’s first Sprint Cup car, his first championship car and his second championship car. Fans and members of the NASCAR community will recognize the combination of paint schemes from the cars that have defined Labonte and his extraordinary career: the Duck Industries car, the Piedmont Airlines car and lastly, the yellow, red and green Kellogg car.

“Even in the early days in Corpus Christi, Terry was already a legend,” said Comstock. “His career has been truly phenomenal and C&J is honored to have been part of Terry’s team the last few years. From a company standpoint, it was a great association. On a personal level, I am proud to know him. We thank him for giving C&J employees, customers and race fans many thrilling memories. We wish him the best in the future in whatever he decides to do.”

Frank Stoddard of FAS Lane Racing adds, “Terry was an integral part of FAS Lane Racing for the past several years. He helped the team secure sponsorship with C&J Energy Services in 2010 and it continues today. He is an extraordinarily honest man, who has always given 110% of himself to this race team. When he gives his word, he honors every commitment he has made. He has had a storied career, that has included championships and numerous victories and I am honored to have been a small part of it. I am proud to call him a friend.”

Since 2005, Labonte has run a limited schedule with various teams including Hendrick Motorsports, Michael Waltrip Racing, Petty Enterprises and most recently the FAS Lane team. Outside of racing, Labonte is known for being an avid hunter and fisherman. An interesting fact about Labonte is his ownership of a marketing company based out of Archdale, North Carolina. SSG/Brandintense is an experiential marketing company that specializes in the fabrication and activation of mobile marketing units, from concept and design all the way to logistics and event execution. Clients include but are not limited to sponsors and companies typically seen at NASCAR events all over the US and internationally. Labonte is the Owner/CEO of SSG/Brandintense and uses his experience and professionalism to help create mobile marketing units and to manage the company while overseeing 50 employees.

While Labonte has slowly dwindled from a full-time schedule, his face may be seen helping clients and employees at various NASCAR races and events in the coming years. It’s also possible that Labonte will be inducted into the NASCAR Hall of Fame. He was nominated for the honor for 2015 but did not make it into the induction class. When the day comes, it will be a deserved and honorable moment for one of NASCAR’s most humble, talented and nicest drivers of all time.

The Geico 500 at the Talladega Superspeedway will be on October 19 at 1:00PM CST.

About C&J Energy Services, Inc.: Founded by CEO, Josh Comstock, C&J Energy Services, Inc. is a rapidly growing independent provider of premium hydraulic fracturing, coiled tubing, pressure pumping, wireline and other complementary services with a focus on complex, technically demanding well completions.  C&J also manufactures and repairs equipment to fulfill our internal needs as well as for third party companies in the energy services industry.  C&J operates in some of the most geologically challenging and active plays in the United States.