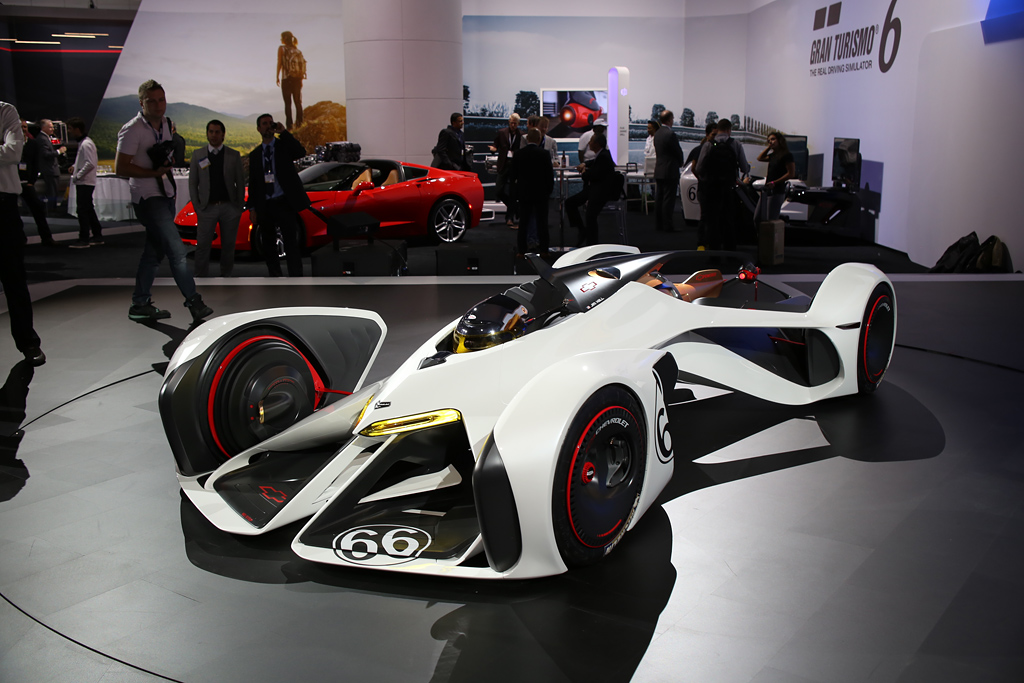 On November 19, in advance of the US Los Angeles Auto Show, Chevrolet has unveiled the full scale model of its Chevrolet Chaparral 2X Vision Gran Turismo. The car which goes far beyond the boundaries of modern day automobiles will appear in the PlayStation 3 exclusive software Gran Turismo 6 in an update planned for the holiday season, where players around the world can experience the unique drive feel of this revolutionary car.

Chaparral has produced ground breaking racing cars that have revolutionized motorsports. The Texas based company had formed a partnership with Chevrolet Research and Development more than 45 years ago, pioneering now-standard methods and materials used in contemporary racing and production vehicles. In addition to things like composite monocoque chassis, lightweight-alloy powertrain systems, automatic transmissions for racing and progressive, active aerodynamics, the partnership also spawned ground-breaking telemetry vehicle data acquisition technology. Chevrolet continues to use racing programs to test and develop new technologies and materials.

The highlight of the Chevrolet Chaparral 2X Vision Gran Turismo which inherits this spirit of revolution, is in its styling and powertrain. The power supply selected for this car is a unprecedented laser propulsion system. The laser beam unit mounted central to the car produces a laser beam pulse which strikes a focusing shroud, and the resulting shockwave produces the thrust which propels this extremely light racing car. With a 671kW laser and air powered generator, this car rises to a top speed of 384km/h（240mph and accelerates from 0-60mph in 1.5 seconds.

This unprecedented Chevrolet Chaparral 2X drive unit is also closely associated with the unique driver position in the car. The driver almost lays completely flat towards the front, with all four of his appendages spread out towards the wheels when driving this car. The laser propulsion system and the suspension unit is laid out to match this driver position, and enables the futuristic active aerodynamics control.

Because the aerodynamics of this car can be controlled in the direction of the shockwave released, it does not require a large rear wing. as a result the body of the Chevrolet Chaparral 2X Vision Gran Turismo was possible to make extremely light. The information display system of the car itself is also minimal; instrument displays of the car is directly projected inside the driver’s helmet visor.

“The Chevrolet Chaparral 2X Vision Gran Turismo is an audacious and ambitious vision – and one that demonstrates to a new audience how Chevy’s engineering and design teams challenge norms and explore the technologies of tomorrow,” said Clay Dean, executive director of advanced design. “It also an ode to a unique partnership that pioneered ground-breaking technologies that are in used today, on the track and the street.”

Meanwhile, Frank Saucedo who oversaw the team that worked on the concept said this about the car: “It was created in a no-rules atmosphere to challenge designers and test engineers to deliver the most exhilarating sensations. Like the original Chaparral race cars decades ago, the Chevrolet Chaparral 2X Vision Gran Turismo weaves advanced aerospace technologies into the design to help achieve its incredible performance. Think of it as a fusion of a wing suit gliding through the skies with a racing car. As a pilot controls the membrane between his hands and feet in a wing suit, the driver controls the aerodynamics of this car. in all respects, the Chaparral 2X is a “Racing Wingsuit” that flies barely above the ground.

The full scale model of the Chevrolet ​Chaparral 2X Vision Gran Turismo will be on displayed at the Los Angeles Auto Show held at the LA Convention center until November 30.