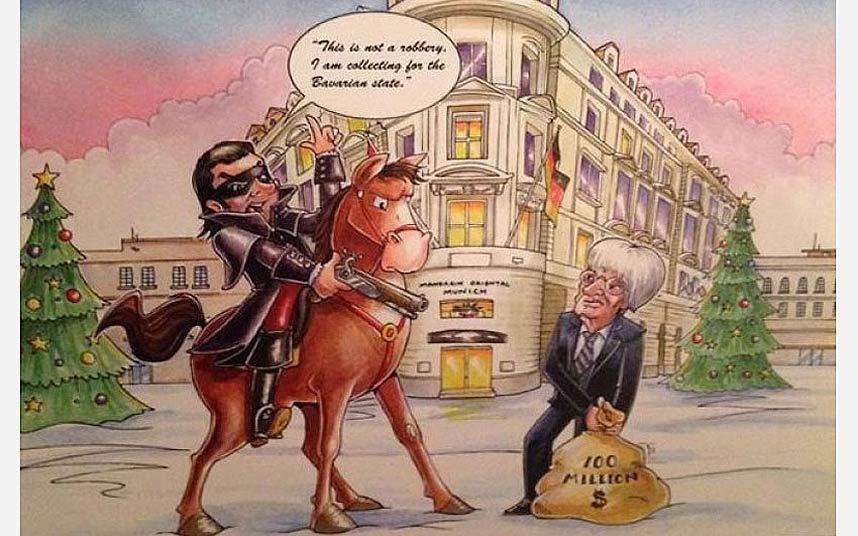 The 2014 Bernie Ecclestone Christmas Card pokes fun at jail threats he’s received this year. Every year F1 boss sends out a Christmas greeting to friends. The christmas card frequently has a comedic effect.

In previous versions of the Bernie Ecclestone christmas card the F1 boss has poked fun at spygate. That particular version of the card depicted Max Mosley spanking team personal.

Another years version has shown Jean Todt holding hands and walking down the isle in marriage.

Lewis Hamilton was also featured on the Bernie Ecclestone christmas card. The Lewis Hamilton cartoon portrayed Hamilton exiting a smoking McLaren. He then jumped the fence for a Mercedes car full of a bag money on his it’s to Stuttgart.

This years Bernie Ecclestone Christmas Card is quoted, “This is not a robbery,” the thief tells Bernie. “I am collecting for the Bavarian state.” It shows a bandit on a horse holding a gun at the F1 boss. The cartoon version of Bernie Eccclestone is holding a bag of money labeled at $100 million.

Ecclestone sat down with a close group of specialist racing reporters and admitted that the Gerhard Gribkowsky scandal and trial had made 2014 a “difficult” year.

“It’s not easy to take your mind away when somebody tells you that you might get ten years,” he was quoted by Forbes’ writer Christian Sylt.

In a sport like Formula 1 where it’s nothing but serious it’s nice to see the boss poke fun at some of the biggest and more serious headlines throughout the year. View the photo album below of some of the Bernie Ecclestone Christmas Card’s.