NASCAR Burnout Rules – There are None 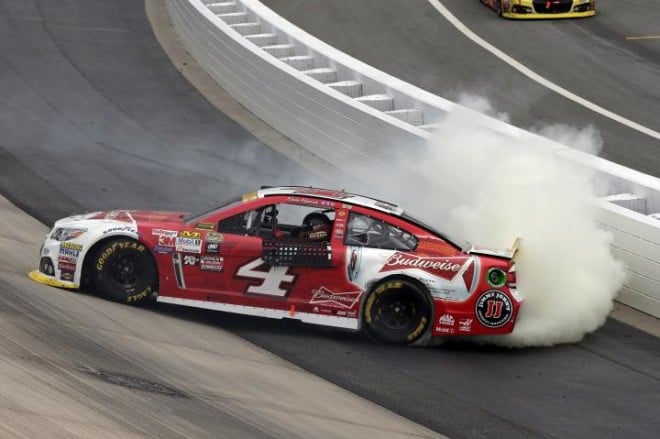 NASCAR burnout rules explained as officials are not expected to “regulate” post-race celebrations following events, calling the long, smoky burnouts done by many race winners a part of the sport today and something that fans have come to expect.

“Post-race burnouts have been a part of the sport for a long time as they give the winning driver the opportunity to express their enthusiasm for their win and give fans an exclamation point to the victory,” NASCAR spokesperson Kerry Tharp told NASCAR.com Friday at Charlotte Motor Speedway, site of Saturday’s Bank of America 500. “We don’t really see them being anything beyond that.”

NASCAR burnout rules and lack their of brought concerns about intentionally damaging a race-winning car came to light this week after defending Sprint Cup Series champion Kevin Harvick made contact with the inside wall while celebrating his victory in Sunday’s AAA 400 at Dover International Speedway.

Two days after the victory, the Stewart-Haas Racing driver said he wasn’t aware that the back end of his #4 Chevy had hit the inside wall during his Dover celebration. His car passed post-race inspection at the track, as well as a more thorough inspection at the NASCAR Research & Development Center two days later.

On Thursday, crew chief Rodney Childers said he wasn’t surprised that some had seized on something so innocent after his driver’s strong performance. He also once again stressed that his team’s cars had been to the R&D center more than any other vehicles this season without officials uncovering any irregularities. The #4 team has made 14 trips to the center for final inspection this season and passed on each occasion.

NASCAR officials transport the winning and second-place entries, as well as a random selection, to the center following each race where engines, fuel cells and other pieces (such as transmissions) are removed and more closely inspected. A computerized device known as a Romer Absolute Arm, the same equipment used to certify each chassis before competition, is used to check each piece for any changes or any inconsistencies.