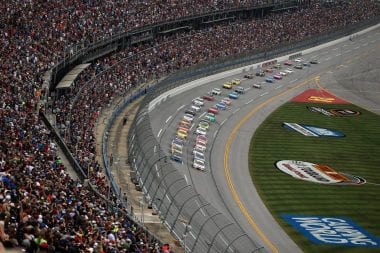 2015 NASCAR Talladega TV ratings down and they hit another set of historical lows for Sunday’s race at Talladega. However, the numbers were more than good enough for NBCSN. NASCAR Sprint Cup racing from Talladega, the sixth race in the Chase For the Cup, drew a 2.6 final rating and 4.2 million viewers on NBCSN Sunday afternoon.

Joey Logano’s third straight win ranks as the lowest rated fall Talladega race since at least 2000 and the least-watched since at least 2001, each falling below the marks set last year. All 18 NASCAR races on cable this season have either hit a record-low in ratings and viewership or the lowest marks in at least ten years.

Though low historically, Sunday’s race performed well for NBCSN. It tied the third-highest rating ever on the network (previously VERSUS and OLN), trailing only the 2014 Canada/USA Olympic hockey semifinal (2.7) and this year’s Brickyard 400 (3.0). It also scored the fourth-largest audience in network history, trailing NASCAR from the Brickyard (4.7M), Michigan (4.3M) and Pocono (4.3M).

The race also ranks as the highest rated and most-watched of this year’s Chase For the Cup, topping the previous highs of 2.5 and 4.0 million for Kansas on the NBC broadcast network, and the top race overall since Darlington on NBC Labor Day weekend (3.7, 5.9M).