One of three new structures that make up the FPL Solar Circuit at the “World Center of Racing.” The commercial-scale distributed solar power installation at DIS complements the $400 million DAYTONA Rising redevelopment project.

The FPL Solar Pavilion and FPL Solar Patio, both of which are canopy-like structures that will offer shade for race fans. FPL Solar Park collectively consist of more than 7,000 solar panels generating 2.1 megawatts of zero-emissions energy.

The three solar structures will be located in the Midway, Sprint FANZONE and Lot 10 parking area.

The total weight of the structures (900 tons) represents the equivalent of more than 500 NASCAR stock cars. 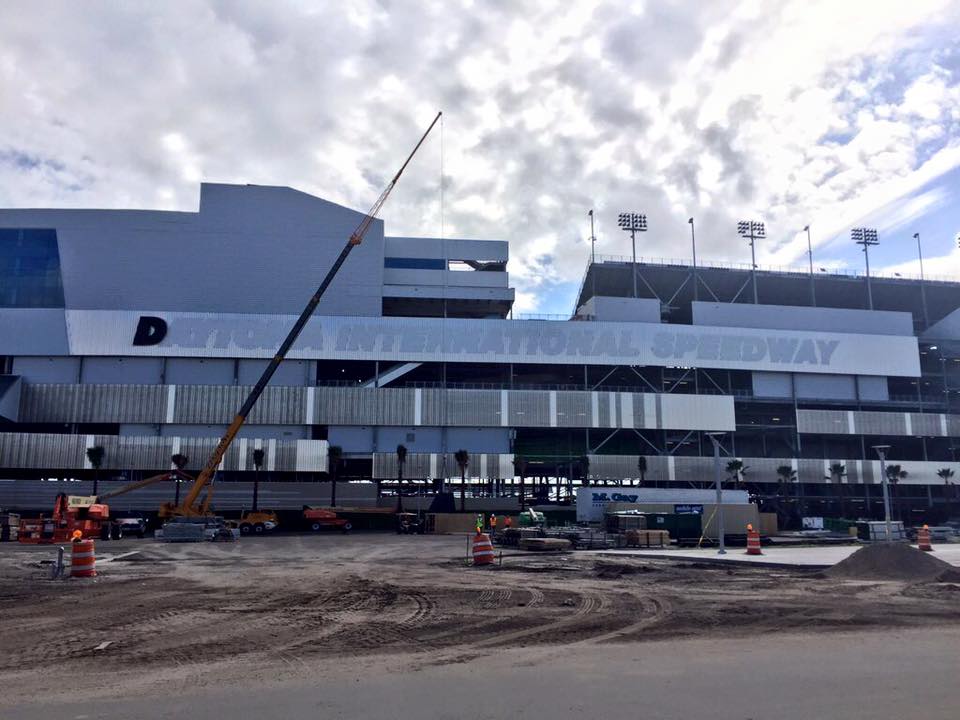 The clean energy generated by the installation will prevent the emission of an estimated 2,200 metric tons of carbon dioxide each year. That’s equivalent to an average vehicle driving more than 2 million laps around DIS. Once connected to the FPL grid, the solar energy at DIS will help to power approximately 400 Florida homes per year.

“As an avid race fan myself, it’s an honor to be part of the extraordinary redevelopment of one of Florida’s most iconic sites and tourist destinations,” said Eric Silagy, president and CEO of Florida Power & Light Company. “The thousands of solar panels we’re installing here will provide zero-emissions electricity for our customers and the Speedway’s operations, helping power races that are viewed around the world. Importantly, our efforts here at Daytona are yet another example of our ongoing commitment to expanding cost-effective solar here in Florida for the benefit of our customers, both large and small.”

Upon completion of the installation in January 2016, DIS will become one of the top five U.S. professional sports venues in terms of solar energy capacity. The FPL Solar Circuit at Daytona International Speedway is one of several FPL solar projects that will add 225 megawatts of new, zero-emission solar energy by the end of 2016, cost-effectively tripling FPL’s solar capacity and making Florida one of America’s top solar energy producing states.

Florida Power & Light Company is the third-largest electric utility in the United States, serving approximately 4.8 million customer accounts across nearly half of the state of Florida. FPL’s typical 1,000-kWh residential customer bill is approximately 30 percent lower than the latest national average and, in 2014, was the lowest in Florida among reporting utilities for the fifth year in a row. FPL’s service reliability is better than 99.98 percent, and its highly fuel-efficient power plant fleet is one of the cleanest among all utilities nationwide. The company was recognized in 2015 as one of the most trusted U.S. electric utilities by Market Strategies International. A leading Florida employer with approximately 8,700 employees, FPL is a subsidiary of Juno Beach, Fla.-based NextEra Energy, Inc. (NYSE: NEE), a clean energy company widely recognized for its efforts in sustainability, ethics and diversity, including being ranked in the top 10 worldwide for innovativeness and community responsibility as part of Fortune’s 2015 list of “World’s Most Admired Companies.” NextEra Energy is also the parent company of NextEra Energy Resources, LLC, which, together with its affiliated entities, is the world’s largest generator of renewable energy from the wind and sun. For more information, visit these websites: www.NextEraEnergy.com, www.FPL.com, www.NextEraEnergyResources.com.

DAYTONA Rising is a $400 million reimagining of an American icon – Daytona International Speedway. Five expanded and redesigned entrances, or “injectors,” will lead fans to a series of escalators and elevators, transporting them to three different concourse levels. Each level features spacious social areas, or “neighborhoods,” along the nearly mile-long frontstretch. At the conclusion of the redevelopment, Daytona International Speedway will have approximately 101,500 permanent, wider and more comfortable seats, twice as many restrooms and three times as many concession stands. In addition, the Speedway will feature over 60 luxury suites with trackside views and a completely revamped hospitality experience for corporate guests.DAYTONA Rising: Reimagining an American Icon, expected to create 6,300 jobs, $300 million in labor income and over $85 million in tax revenue, will be completed in time for the 2016 Rolex 24 At Daytona and DAYTONA 500.

Toyota, Florida Hospital, Chevrolet and Sunoco are Founding Partners of DAYTONA Rising, joining the Speedway to help provide the very best experience for fans through more than 80,000 total square feet of engagement areas, branding rights for four of the injectors/entrances and four of the new neighborhoods.

Barton Malow is serving as the design-builder for the project. In addition to DAYTONA Rising, Barton Malow has renovated the University of Michigan “Big House” and the Rose Bowl.

ROSSETTI is the architect for DAYTONA Rising. ROSSETTI is an award-winning architectural design and planning firm with 46 years of expertise in sports and entertainment projects including the Green Bay Packers Titletown, renovations for the Seattle Seahawks at CenturyLink Field, a new headquarters for the LA Lakers, five MLS stadiums and the new retractable roof over the USTA’s Arthur Ashe Stadium.

Race fans can follow the progress of the DAYTONA Rising project by visiting www.DAYTONARising.com and connecting with Daytona International Speedway on Twitter, Facebook, Pinterest, Instagram and YouTube. Also, fans can see the construction project up close by taking one of the daily tours available at the Speedway on non-event days throughout the year. Visit www.daytonainternationalspeedway.com/tours or the Speedway Ticket and Tours Building for more information. For tickets and more information on Daytona International Speedway events, visit www.daytonainternationalspeedway.com or call 1-800-PITSHOP.

Daytona International Speedway is the home of “The Great American Race” – the DAYTONA 500. Though the season-opening NASCAR Sprint Cup event garners most of the attention – as well as the largest audience in motorsports – the approximately 500-acre motorsports complex boasts the most diverse schedule of racing on the globe, thus earning it the title of “World Center of Racing.” In addition to eight major weekends of racing activity, rarely a week goes by that the Speedway grounds are not used for events that include civic and social gatherings, car shows, photo shoots, production vehicle testing and police motorcycle training.

Dillon had a lucky penny installed for Daytona 500; Same celebration at Earnhardt