As of 2006, the World of Outlaws Sprint Series races at the track once a year, in June, which has now been replaced by the ASCS Nationals.

In 1963, Eagle, NE residents Dale Halvorsen and Harvey Kropp constructed the racetrack out of farm ground owned by Halvorsen. Kropp served as promoter of the races. The unique terrain allowed for a high-banked bowl-shaped racetrack to be carved out of surrounding hills. The hills provided an easy location for above-track grandstands.

Kropp and Halvorsen promoted primarily open wheel racing events throughout the 1960s and 1970s, ending their promotion of racing after an abbreviated 1976 season in which the only death at the speedway occurred after Jim Golden flipped in turn one after releasing his seatbelts shortly after winning his preliminary heat race.

The track remained dormant until 1978 when Paul Saenz leased the track from Halvorsen and raced Late Model Stock Cars weekly.

In 1984, the track was purchased by John Beecham, his wife Laura and John’s brother Marty. Interestingly, Laura Beecham is the sister of Jim Golden, the only driver to die in competition at the track. The World of Outlaws were brought to the track for a June show.

The Beechams began a major renovation project, razing the decaying original scorer’s tower and concession stands and constructing a new, two level concession stand and scorer’s / VIP area. The old seats were replaced with seating for approximately 5000 fans. The race program consisted of a Friday night winged sprint cars program and a Saturday night NASCAR-sanctioned weekly stock car program. For the 1985 season, the days of the stock car and sprint car program were reversed and IMCA Modifieds were added to the Sprint Car show on Saturdays.

The 1987 season saw the introduction of the USAC Midget Series in the Midsummer Midget Classic, which brought future NASCAR Nextel Cup stars to the track. Winners of the annual race include Jeff Gordon (1990) and Tony Stewart (1994).

In 1997, the Beecham Family sold the track to Craig Cormack and racing partner Dean Orth operating as Eagle Entertainment, LLC. Cormack took full control of the racetrack in 1999 and continued the weekly program with stock cars on Friday and Sprint Cars & Modifieds on Saturday. As part of the new ownership, the wooden bleachers were replaced with concrete and aluminum stadium seating, with an additional two sections of seats were added in 2000 including a 40-foot (12 m) high section of aluminum grandstand and a smaller section of 750-seat wood bleachers, increasing the seating capacity to 8500.

The track focused on the entertainment model put forth by such groups as World Wrestling Entertainment, emphasizing activity in the stands as well as the track, and a 100,000-watt sound system was added in 1997. Notable was the inclusion of track announcer Rick Schwieger, who joined Speed Channel as the NASCAR Craftsman Truck Series play-by-play announcer and adopted the broadcast name Rick Allen.

After the 2005 season, again citing poor attendance, increased criticism on Internet Forums and lack of profit during his ownership, Cormack closed the racetrack and put it up for sale. Former Late Model driver Roger Hadan entered a lease agreement with Cormack to operate the racetrack in 2006, and purchased the track at the end of 2006.

Hadan added IMCA Hobby Stocks and Sport Compacts to the Saturday Night program. Hadan also gained notoriety for promotion of School bus Races and other novelty acts for fans. In 2007 he added a JumboTron, which was sadly laid to rest in the 2010 race season. In 2010, the IMCA Sport Modifieds were added to the weekly program.

After the 2010 season, the track leased the facility out to Eagle Hollow Haunt for a seasonal Haunt during the month of October.

2011 will be the inaugural year for the Mini E Raceway inside the high banked bull ring of Eagle Raceway hosting Friday night go-kart racing.

Eagle Raceway has become America’s Home Track striving to become your home away from home racing experience. We have proudly become an affordable family entertainment destination right here in the heartland of America…the grass roots of racing. 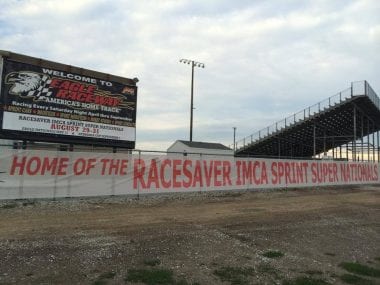 Click to view a printable version of the : Tentative Eagle Schedule 2016