Indycar Coming to St Louis in 2017

Indycar coming to St. Louis in the 2017 season. Gateway Motorsports Park will usher in a new era in 2017 with the Verizon Indycar Series event.

The 2017 Verizon IndyCar Series date is scheduled for the evening of Saturday, August 26, with practice and qualifying on Friday, August 25. Tickets will go on sale October 11, 2016.  Additionally, plans are already underway to incorporate a week-long celebration leading up to the race. 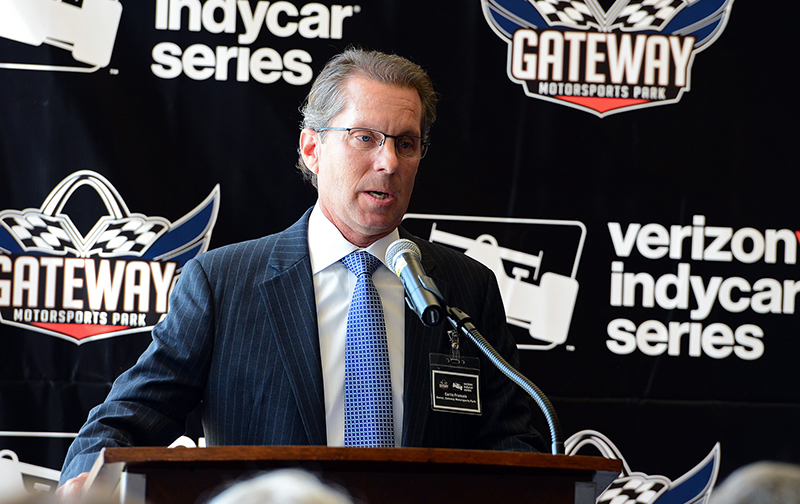 “Today is a monumental day for the people of the St. Louis region,” said Curtis Francois, owner of Gateway Motorsports Park. “More than a dozen track operators around the country sought an INDYCAR date for their communities. I firmly believe we came out on top because of the energy, loyalty and commitment to great sports that sports fans of all kinds demonstrate each day in this community. ”

“Gateway Motorsports Park is a key addition to the Verizon IndyCar Series schedule,” said Mark Miles, CEO of Hulman & Co., the parent of INDYCAR and the Indianapolis Motor Speedway. “Curtis Francois has been enthusiastic about the prospect of hosting an INDYCAR event for some time and we’re excited to bring the Verizon IndyCar Series to the market in 2017. Curtis and his team have made substantial improvements to the track and we’re confident both the facility, and the on-track competition, will be of the highest quality.”

In 2012, days before having its grandstands dismantled and sold as scrap, St. Louis native Francois took the reins and breathed new life into the shuttered facility.  With a lofty fan-focused vision, a new name, a full racing schedule and support from one of the largest motorsports fans communities in the nation, Gateway Motorsports Park has grown and hosted more than 1,000,000 people in 2016 with over 300 large and small events. “I am proud of the progress we’ve made at my hometown track,” said Francois, who has pumped $20 million in capital improvement investments over the last four years. “I knew someday we would be making an announcement like this because I have such confidence in the people of this region and their commitment to great sporting events.”

“Securing the date is the first step in putting on a successful international-level event like an INDYCAR race,” said Francois. “The next step is to secure partnerships with civic and business leaders so we can bring to life an  entire INDYCAR festival the week leading up to the race that will bring together tens of thousands of people to a charity golf tournament, bike race, charity walk, concert and so much more.” Francois says his team is already in talks with potential race sponsors and he’s encouraged by the early support.  Industry experts say similar events bring $50 million dollars of new revenue into the community.

NEXT POST
Will Power Cleared to Race after Passing Concussion Tests